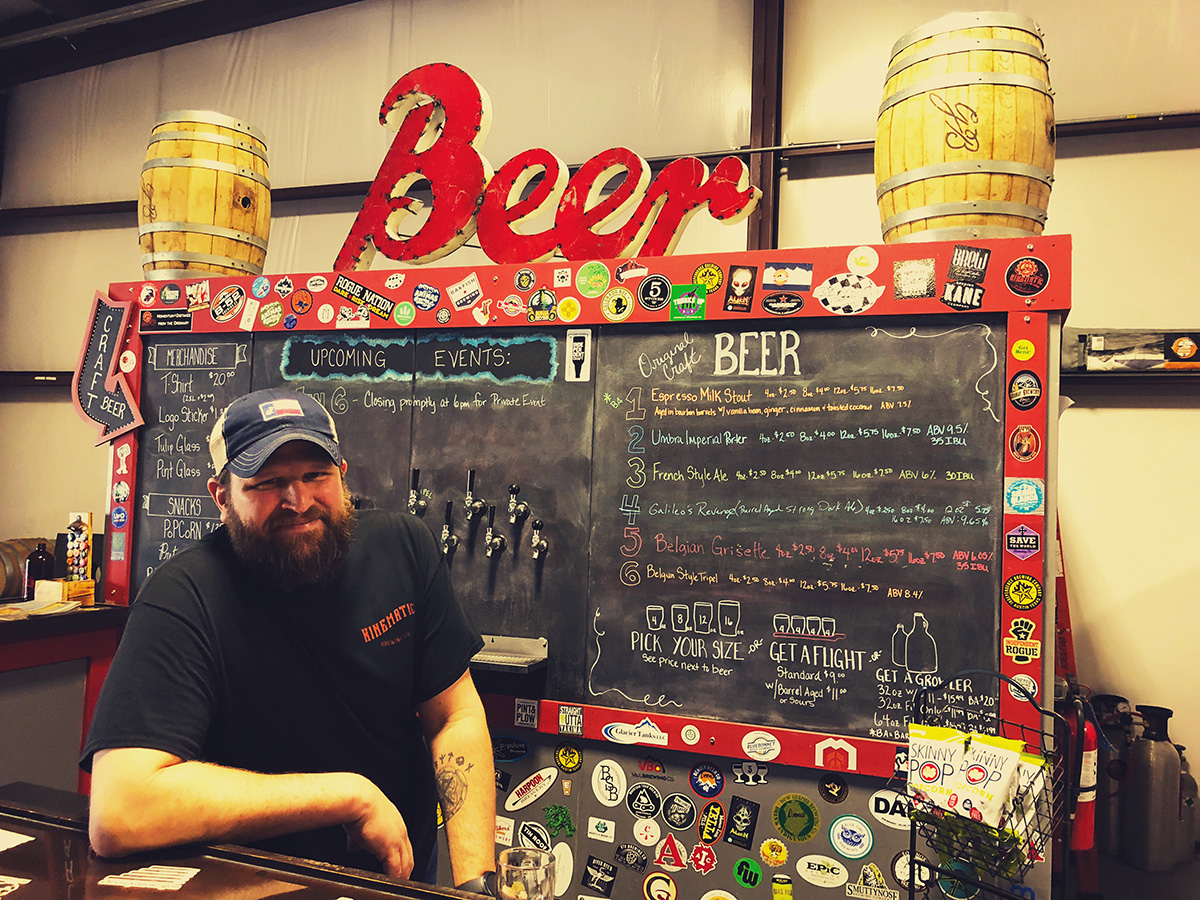 You’ve probably seen the ads from a well-known beer urging you to “Be Bold.”

It’s too bad Kinematic Brewing didn’t trademark that slogan first — if there’s any word that describes brewer John Beaumont, it’s bold. If you drop in to his tiny brewery just outside of Boerne for a drink, you’d better be adventurous.

Most microbreweries offer up a light lager or pale ale for those just dipping their toes into the world of craft beer, but when Rock & Vine visited, his entire six-beer menu was heavy stouts and porters, a French farmhouse ale, and strong Belgian-style brews.

“I do go for heavy-flavor beers,” Beaumont admits. “For the breweries in the area, I’m definitely doing something different. I don’t have an IPA. I don’t have a pale ale.”

It’s not that he looks down on his fellow brewers, or those styles. Quite the opposite — he avoids those craft beer staples because “there are so many breweries out there doing them better. That’s tough competition to get into. The field is just littered with IPAs and pale ales.”

Instead, he’s searching for the niches less explored: “I like doing things a little bit differently and not doing your normal sort of beers.”

And he doesn’t sit still on any particular style, either — by the time you read this, his lineup might be completely different.

“Kinematics” is a field of study in physics and astronomy describing the motion of bodies, sometimes called the “geometry of motion.”

“I equate that as not being stagnant,” Beaumont, a self-described astronomy nerd, says of his brewery name. “Always evolving, thinking outside the box, always fluid, not always being the same beer.”

The beer that knocked us out (a bit literally — it’s 9.65% alcohol by volume, so as always, a designated driver is a good idea) was Galileo’s Revenge, a Belgian-style dark ale aged for six months in 12-year bourbon barrels, obtained from nearby Rebecca Creek Distillery. And his Espresso Milk Stout was also aged in bourbon barrels, with hints of vanilla, ginger, cinnamon and toasted coconut.

By the time you get there, he will have moved on to other styles, going where no brewer has gone before.
“I enjoy getting to play a little bit with ingredients. I have a beer aging in French oak right now that’s a saison, but I fermented it with saki yeast, and then dry-hopped it with jasmine green tea, and now it’s refermenting on Fredericksburg peaches.

“And I have another saison in which I added black truffle honey, and took mission figs, macerated those figs in pinot noir wine for a couple of days, and then smoked those figs over cherry wood. And now the beer is refermenting on those figs.”

When the weather gets hot, Kinematic will offer up its popular and refreshing watermelon wheat beer.
“Playing with a food element is a lot of fun,” Beamont says. “It opens up the creativity a bit. And it differentiates you from the other breweries.”

The two-year-old brewery itself is in motion, as well. Currently located on Highway 46 east of Boerne, it’s about to move to a new location near Comfort in May.

Moving from its almost hidden location in a small office park to a new one on a 50-acre farm will offer expanded possibilities — shifting from a tiny four-barrel brewing system to a 10-barrel one, and bringing in some food trucks (at the moment, popcorn is the only eating option at Kinematic).

“Like, I just did an oatmeal stout made with beignets and cafe au lait. I actually baked beignets, used them in the mash and the wort, and added coffee with chicory.

“It’s only going to get crazier,” Beaumont laughs. “I’ll continue to experiment and play and push. What’s new, what’s different, what can’t we get everywhere else?”

Beaumont says being bold is paying off.

“A few people told me that my idea was not going to make it, that I need to have an IPA and a pale ale. Instead, I’ve been really surprised. The people that walk in ask me, ‘What’s new? What have you come up with?’”