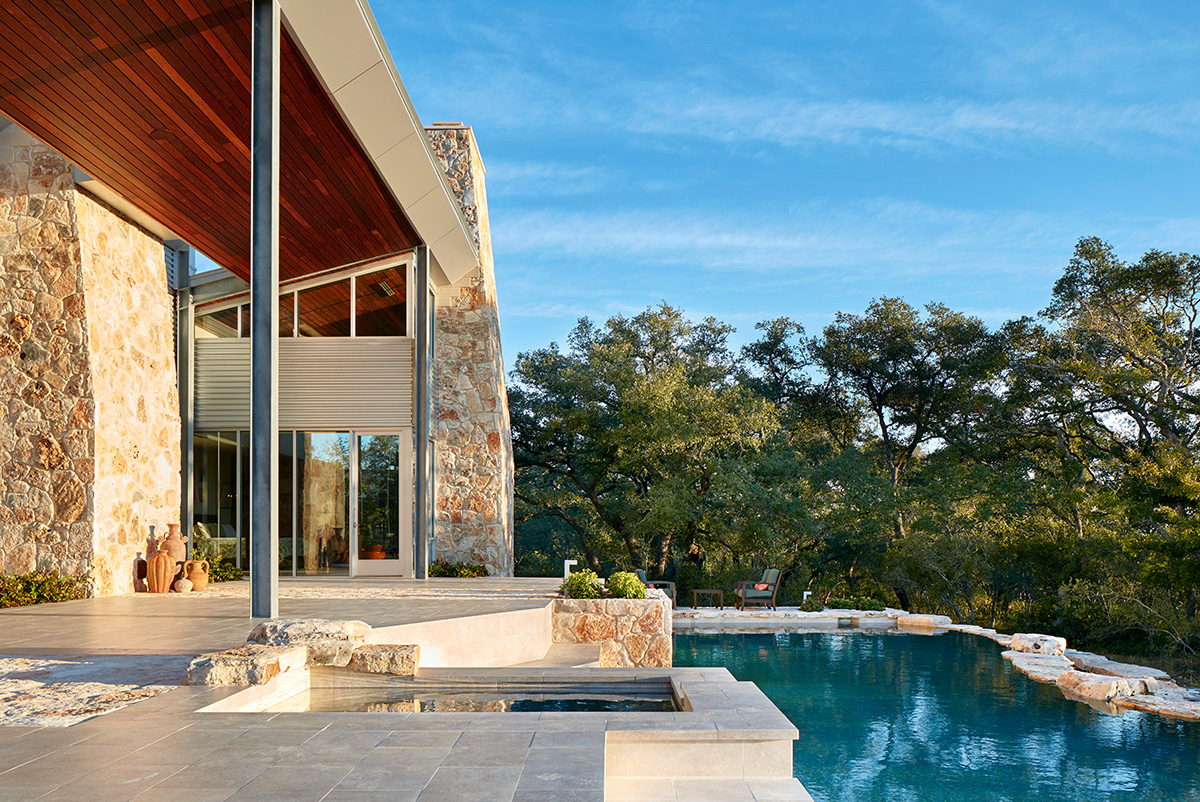 The Devil’s Backbone is a legendary length of highway stretching between Wimberley and Blanco. Tall Texas tales of mischievous ghosts give the area its name, but the panoramic views that define this place are simply heavenly. The sweeping landscape and biodiversity of the area drew Austin designer Jack Carson and his wife Jackie to purchase 50 acres for the construction of their primary residence, Backbone Ridge. The couple was determined to maximize their connection to the surrounding countryside, so Carson set out to design a home that blurred the lines between indoor and outdoor spaces.

“The property is fairly isolated,” says Jack. “Without any homes nearby, I was able to design with lots of glass to take advantage of the views and the privacy.”

Carson reached out to Grady Burnette, a custom home builder based out of Wimberley, to help him bring his vision to life. Although the two had never worked together before, Burnette’s familiarity with the sometimes challenging Texas landscape, together with a track record of working with architects on contemporary homes, made him an easy fit for the project.

“It was an intriguing project with interesting plans,” says Burnette. “There were quite a few unique features, and I was really excited to build it.”

One of those unique features was the use of site-specific stone. The acreage had an ample amount of stone that the couple was eager to use in construction, despite their knowledge that the stone’s coloration would be a bit of a surprise.

“We quarried everything from the land, and we got what we got – we knew we wouldn’t get to pick the stone colors,” shares Carson. “Once the colors were established, we could move forward and pick other finishes.”

Carson incorporated the local stone, which has hints of red and rust colors, on both interior and exterior walls. He also used the stone to create a gentle contrast in the pool design with a sloping wall that draws the modern edges of the pool back into the rugged landscape.

Ipe wood, which is known for its strength and durability, was selected to compliment the stone and add rich color throughout the 6 bedroom, 6.5 bathroom home. The wood finish is especially striking on the sweeping 1,800 SF exterior awning, which slopes up in such a way that it blocks the sun but doesn’t obstruct from the view, which is made possible because of the 100% steel construction design.

“Working with a galvanized steel structure that is laid out using a grid system is very different than a traditional wood frame structure,” Grady shares. “We had to be very exact, especially in the construction of the fireplaces. It was a good challenge.”

Another unique feature of the property is the decision to use six smaller (3,000 gallon) rain tanks instead of relying on one larger one. The tanks are integrated into the design of the house and leave the landscape uninterrupted. Rainwater, pure and gentle on pipes, is used inside the home for drinking and showers, and a separate well provides water for irrigation.

Backbone Ridge is very site specific, and Carson noted that the design would not be as successful on another site. “We were able to use so much glass to take advantage of the views, because we didn’t have to worry about privacy.”

The home doesn’t have a true front or back side, so each of the four elevations were designed to purposefully integrate into the landscaping, which was not planned by a landscaping firm, but by nature.
“We took great care to leave what was already there undisturbed and let the natural landscape come right up to the house,” shares Carson. “The land is beautiful and we really wanted the house to look like a part of it—they had cleared the cedar in the 1930’s, and because of that, there is a great diversity of plant life that you don’t always see in the Hill Country.”

Now settled in, the couple is delighted with the result. With 5,100 square feet of conditioned space available between the main house and the two separate guest suites, they still find themselves spending most of their time outdoors. Friends and family are often gathered in one of several outdoor entertainment areas, and the Carsons have found that the outdoor fireplace is the one they most often use. Despite Texas’ scorching summer heat and the abundance of glass, utility bills are relatively low, thanks to smart orientation that takes advantage of southeastern winds, and the ample shade structure.

“We are really happy with the results. The main thing is we love being on the land, enjoying it, and taking care of it. The design was predicated on taking advantage of the land, natural settings, and being outdoors, and bringing the outdoors in,” says Carson