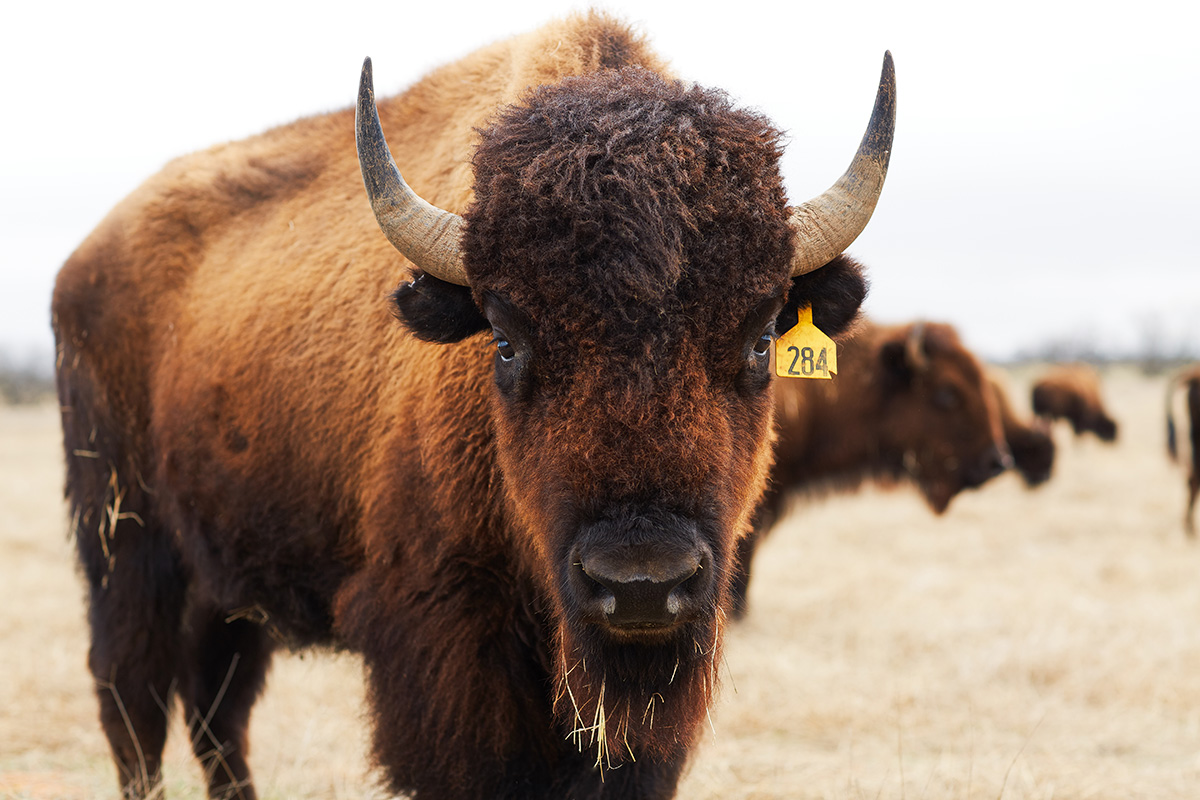 A home, where the buffalo roam.

One family’s answer to regenerative ranching

After tackling the world of food through their meat snack-bar line, Katie Forrest and Taylor Collins shucked it all to pursue their passion of regenerative agriculture.

Regenerative ag seeks to improve a parcel of land’s ecosystem by enriching the soil’s biodiversity.

After selling their meat-bar company EPIC to General Mills, the couple acquired 900-acres of land outside of Fredericksburg in 2017 and started the work of restoration.

Collins and Forrest and their daughter, Scout, spread their time between Austin and the Hill Country.

Rock & Vine talked to them about this new adventure.

R&V: What factors contributed to the land degeneration?

TC: Over time the land gets degraded from row crops, animal over grazing, monocrop production, as well as tilling which disrupts the soil and releases carbon into the atmosphere.

R&V: What was impetus to bring bison onto the land?

TC: The genesis and the inspiration for the bison is that they are an important and keystone species in the United States. There were millions (40-60 million) of bison roaming up and down the Great Plains and Central Texas. The Fredericksburg area was on the southern tip. It was a natural migratory path for the bison. It blew our minds that they had been removed from that ecosystem and that land for at least 150 years.

The genesis and the inspiration for the bison is that they are an important and keystone species in the United States.
– Taylor Collins

As humans we don’t fully understand the complexity of nature, but we do know that when bison are present, certain things start happening. Synergies start investing and we began to see different birds showing up on the property. We saw new insects that were desirable and favorable. The bison were spreading native seeds for us. They were aerating the soil and adding fertility to it. All these things that bison do intrinsically, we wanted that to happen on our property. The bison add fertility and build our soil’s organic matter that creates biodiversity on our land. They are a natural tool that we wanted to bring out to our property.

R&V: Roam offers ranch tours, farm-to-table events and turkey harvests. What experiences do you want people to take away from these scheduled events?

KF: I would say one of the biggest things is a strong connection to where food comes from. You can go to the grocery store and buy produce and meat and really have no idea how it came from the ground to your plate. There is such a huge disconnect in terms of how people think about animals, animal welfare and land management when you don’t see it or have any direct connection to it. Pretty much every public tour or event we hold includes some sort of regenerative principle or agriculture 101 tour.

R&V: Are you seeing signs of industrialized farming and ranching heading toward a more sustainable effort?

One overaching theme is that with every decision we make we are trying to work with nature as opposed to against it.
– Katie Forrest

KF: I would say yes. Organic is in the right direction, but it’s not necessarily the only right direction. Organic still utilizes heavy tilling and soil disruption. Ultimately big companies like General Mills and Dannon recognize that we are not going to be able to feed future generations without changing our agricultural practices.

TC: The Food and Agriculture Organization (FAO) agricultural products division of the United Nations, released a report two years ago that stated there are less than 60 harvests left on the planet. That’s our current industrial agriculture state because we are so focused on mechanization and extraction. We are so focused on extraction from the earth that we are not rebuilding and putting anything back into the soil. One of the biggest impacts that we’ve been able to have at General Mills and other big multinational corporations is that for a long period of time people have been using the word sustainability, like it’s this top tier attainable goal in food production. When you see that all of our land has been degraded and our greatest resources have been maximally extracted, that is not really sustainable any longer. This idea of regenerating, rebuilding, healing and restoring the land is a very intentional difference than how we have looked at sustainability in the past. This has been on the radar of all these big companies. Through the work we have done with Epic and General Mills there are now other big multinationals coming on board which is super exciting and really, really cool.