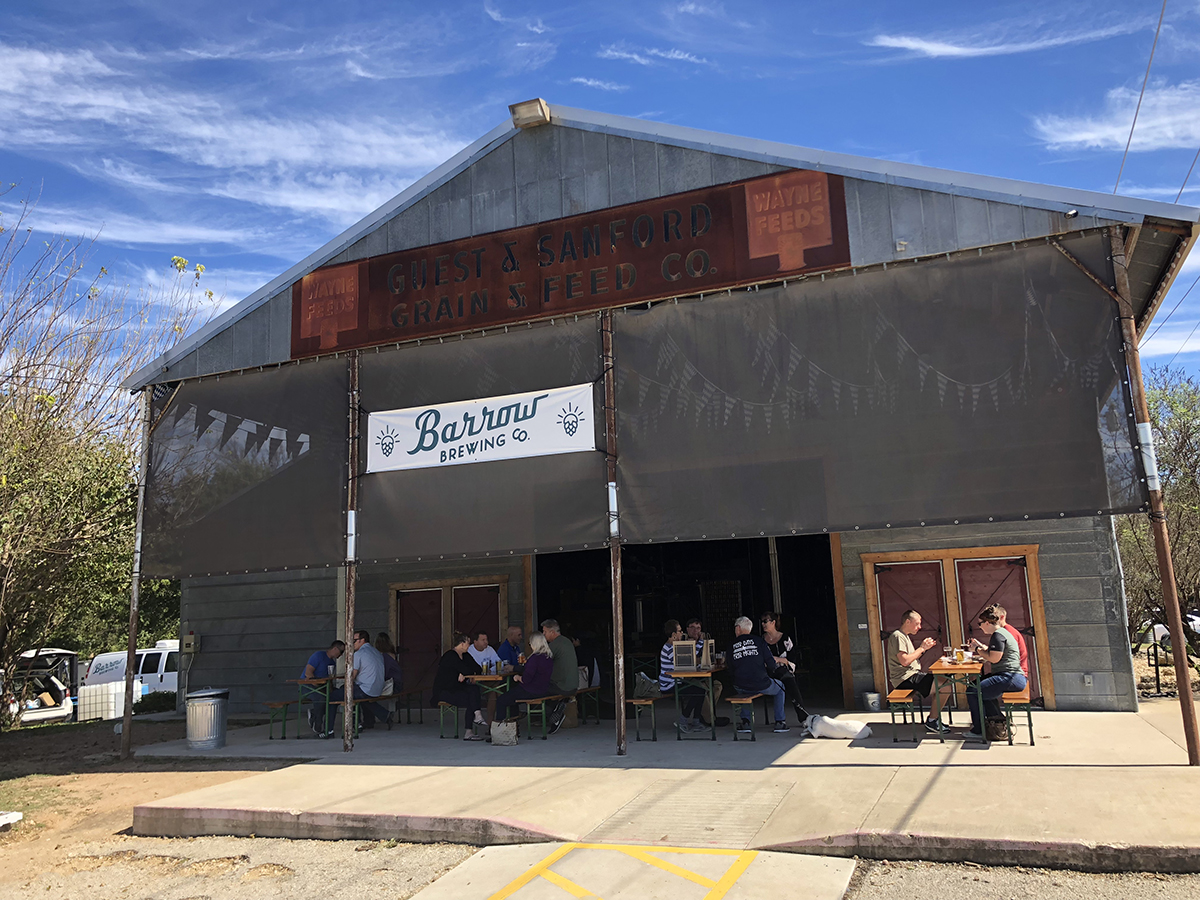 Any entrepreneur opening a new business has to play a nervous guessing game: Just how big will the market be?

When Barrow Brewing opened up in Salado in April 2016, its owners already had a solid number: 784.

That’s how many Saladoans voted in 2014, at the request of Barrow owners K.D. and Graydon Hill, to change a local law that would allow them to sell their products on the premises of the brewery. That 784 easily overwhelmed the 229 against, and today, the Hills honor their supporters with a Belgian-style witbier named 784.

“Since the beginning we’ve support from the locals,” says K.D. “The first step was to petition. You have to get a certain percentage of the registered voters to sign the petition saying they want to vote on this.”
But the Hills were aspiring brewers, not politicians, and newcomers to Salado.

“We didn’t actually know what we were doing,” she says. “Graydon went down to city hall and they said, ‘If you want to be on the November ballot, you need to have 300 signatures by next Monday.’”

That was only three days away. That should have been nearly impossible in a town so small (population 2,126), but apparently Saladoans were thirsty – the Hills gathered 500 over that Labor Day weekend.

In the time from then until the November 2014 election, “We did a lot of educating. Some people said, ‘We can already get beer, we just go to the restaurant. Why do we need to change the law?’”

Once they got the law passed, excitement really started to build – Saladoans wanted to know when their brewery was coming.

“We had a year of people saying, ‘Hey, when do we get our beer?’” K.D. says. “The locals followed along – they were really invested in the whole process. People would come by on Thanksgiving and Christmas and they’d bring the whole family and say, ‘We had to show off our brewery’ – they’d use the possessive pronoun.”

On the day Rock & Vine visited, it was hard to imagine why the vote wasn’t unanimous.

Beautiful sunshine radiated from a cloudless sky, the temperature was perfect and the crystal clear waters of Salado Creek lazily flowed past just a few yards away. The only way to improve such a day would be to have a delicious beer in one hand and tasty pizza in the other … and Barrow had that covered.

Craft brewers are artists, and the Hills found this picturesque village that relies so heavily on the arts and crafts business was a perfect fit.

“We moved here and fell in love with the community, the artists working here, literally handcrafting their dreams,” K.D. says. “Graydon had been a pilot, traveling all the time, and he was home brewing. He decided he wanted to do it full time. We looked at neighboring towns, but it just didn’t work out, and then we really got lucky with this venue.”

Appropriately enough, it was a former live theater. The previous owner told the Hills he was willing to wait for the law to get changed, which was very generous, they say.

They tore out the walls and stage, ordered fermenters, then set about working with local artisans.

“There’s a legend around here, Lonnie Edwards – look up his chicken art online,” K.D. says. “He sourced some long leaf pine that he harvested from an old house, built in the 1850s. It’s beautiful golden wood, and we made our bar from it. We tell people our bar is older than Texas, because that tree must have been 100 years old when they built the house. We’ve been really lucky to work with the older generation of Saladoans, they’ve worked with us and cheered for us.”

As for the beer, “We’re going for balance and drinkability,” K.D. says of Graydon’s creations. “We have a lot of rural beer drinkers and we’re the introduction to craft beer for a lot of them. Of course, we have some connoisseurs come up, too.

“We wanted to be solid from the very beginning. We had that whole year from the election to our opening, so Graydon had time to really refine the recipes. Mostly, we haven’t changed anything since we opened, and business has been steady.”

Adding to that business has been a pizza trailer that Barrow purchased, serving up pies.

“Because of the beautiful setting, we’ve had a lot of tap-room traffic. We’ve already outgrown it, so we bought the tennis court next door for more seating area,” Graydon says.

The naming of 784 wasn’t Barrow’s only nod to the locals. Barrow’s best seller has been their Creek Don’t Rise Lager and their IPA is named Evil Catfish, after a character in a legend about Salado Creek (too long to repeat here, but it can be read on the cans or on Barrow’s website). The Coffee Creek Lager is brewed with coffee purchased from the nearby Strawberry Patch gourmet coffee shop.

And then there is Tipsy Vicar Stout, named after a local priest… who also happens to be a beermaker.

“You know you’ve found the right church when the priest is a homebrewer,” K.D. laughs. “He was one of our big cheerleaders. We had church ladies going door to door for us with the petition.”

Barrow even had one of his recipes in its rotation for a while. K.D. says that inspired Barrow to hold a Priest’s Pint the third Thursday of every month, where a rotating group of ministers, priests, monks and theologians present a short topic and then the audience breaks into groups to discuss over a beer.

It’s just yet another way in which Barrow has integrated itself into Salado, and helped Saladoans do the same amongst themselves.

“I spend a lot of time in the taproom and I get to know the customers and neighbors. They’re very eclectic – military, golfers, retirees, hippies, artists, ranchers and farmers. It’s a good combo. Some of them say, ‘I never knew my neighbors and I’ve lived here 20 years.’ Now they’re regulars here, and a lot of it is intergenerational.

“It’s a beautiful thing,” K.D. says. “This community sprung up on us. I like to say it’s friendships fermenting.”