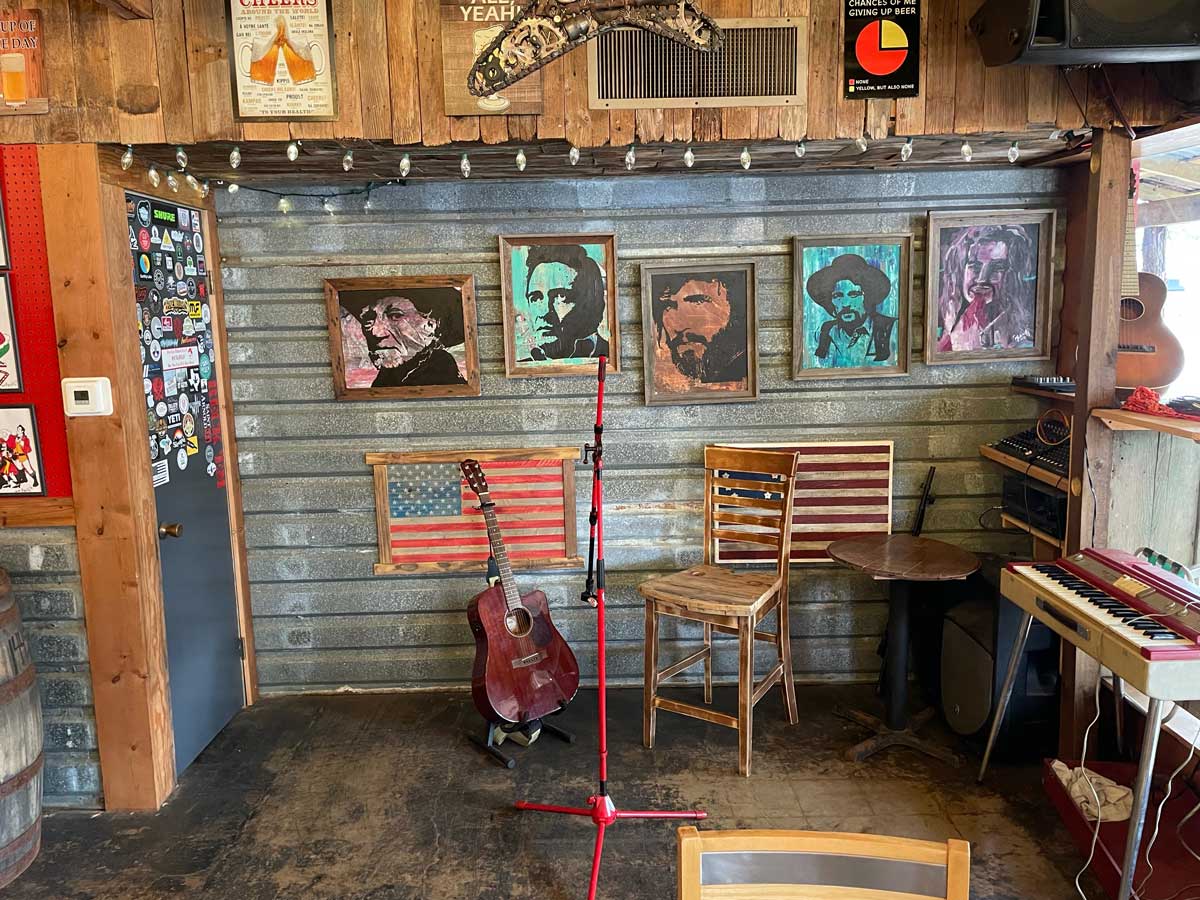 Reck ‘Em Right Brewing is gettin’ ‘Hygge’ with it in Johnson

Despite what you’ve heard, not everything is bigger in Texas.

Indeed it was. Maybe you’ve visited one of the better-known craft breweries and admired the 30-barrel production facility common to some of them, or even the 60-barrel system at Real Ale in Blanco. That’s definitely not what we’re talking about here. Jung’s three-barrel set-up “is basically a giant homebrew system,” he says.

In total — bar, seating area and brewspace combined — Reck ‘Em’s space on Avenue G has a footprint of only about 1,000 square feet.

Jung is comfortable with that. Despite having been in business since late 2019, Jung says, “I still don’t consider myself a pro.”

But pro he is, after taking the typical route of brewing at home, hearing from friends that he was pretty good at it. “I had several backyard successes, and very few failures,” Jung says. So he took the leap into trying to make money off of it.

If the phrase “craft” makes you think of more of a shop owner laboring intensively in a small workshop rather than big business, then you’ll get what Jung is doing.

And if the phrase “Reck ‘Em” makes you think of a certain university, well yes, you’re right — Jung is a graduate of Texas Tech, where “Wreck ‘Em Tech” is the Red Raiders’ rallying cry.

Yes, Jung knows how to spell. “Reck” is an archaic English word meaning “to have care, concern or regard for,” with roots in early Germanic and Danish tribal languages. So Jung drops the W as a way of saluting his alma mater while also paying tribute to his family roots … and demonstrating the care he puts into his craft.

Jung studied architecture at Tech, but a few years in realized he’d rather teach school, which he did (8th grade math and science) from 2015 to 2020, even after opening his brewery. But the way he’s pulled his business together, you’d think he’d been an economics or business major. He knows how to watch the pennies.

“We did this on a teacher’s budget, and my wife’s a nurse,” so that’s why he purchased the 3-barrel system from Corpus Christi’s Rebel Toad Brewing (they were moving up to 10 barrels).

“And we saved money by using Norwegian Kviek yeast for most of our beers,” Jung says. “Regular ale yeast has to be a steady temperature. But in Norway they pitch the yeast really hot to inhibit bacteria. Over centuries, Kviek evolved to like heat.”

It allows Jung to regulate his temperature control room with a window unit air conditioner, and to ferment a batch in just 48 hours — a necessity for a small operation like his with limited production capacity.

You can’t argue with the results. All from that same yeast, he produces a pale ale, a cream ale (including a bourbon barrel-aged variant), a hazy IPA, an imperial stout, a barleywine and a red ale (of course – he’s a Red Raider!), all of them quite satisfying.

Don’t be surprised by the hazy nature of the Kviek beers — that’s intentional. “We do not filter any of our beer, so if it’s hazy, it’s supposed to be that way.”

He also has some Lone Star, hard seltzer and wine if you’re not on the craft beer bandwagon yet.

In fact, Lone Star was where Jung started as a beer drinker, but Real Ale’s products turned his head and tastebuds to other styles. His early inspiration was IPAs. “But I don’t brew as many of them as I’d like, just two or three. I also really like big beers [high-alcohol stuff like imperial stouts and barleywines], but I have to tone them down. If they come here and only have one and done, that isn’t very profitable.”

Visit Reck ‘Em later this year and you can try his Christmas ale, brewed with something that is in no short supply in the Hill Country — juniper, or what we Texans call cedar. “My customers always say, ‘It tastes like Christmas!’”

The only place he can’t use the Kriek is in his Belgian-style beers, where they wouldn’t produce the right flavor.

An afternoon or evening at Reck ‘Em is a perfect Johnson City experience — small-scale and cozy. His tiny tasting room feels more like a living room with a bar (and hey, who wouldn’t like that?) and art on the walls — all for sale, except his pictures of the Highwaymen, with 100 percent of the sale going directly to the artists. It’s a way to give back to the community, “plus I didn’t want to decorate,” Jung laughs.

Musicians set up in the corner, including some of Texas’ better “young country” acts on Friday and Saturday evenings, and a pickers’ circle on Sunday afternoons.

And Jung can dish up some food for you. He’s in the process of transitioning to a new menu — by the time you read this, he expects to have a selection of appetizers, salads and sandwiches.

It’s an atmosphere that Jung says can be summed up as “Hygge.”

“In Danish, Hygge means a feeling of contentment or well-being which is regarded as a defining characteristic of Danish culture.”

That sounds about as Johnson City as you can get.