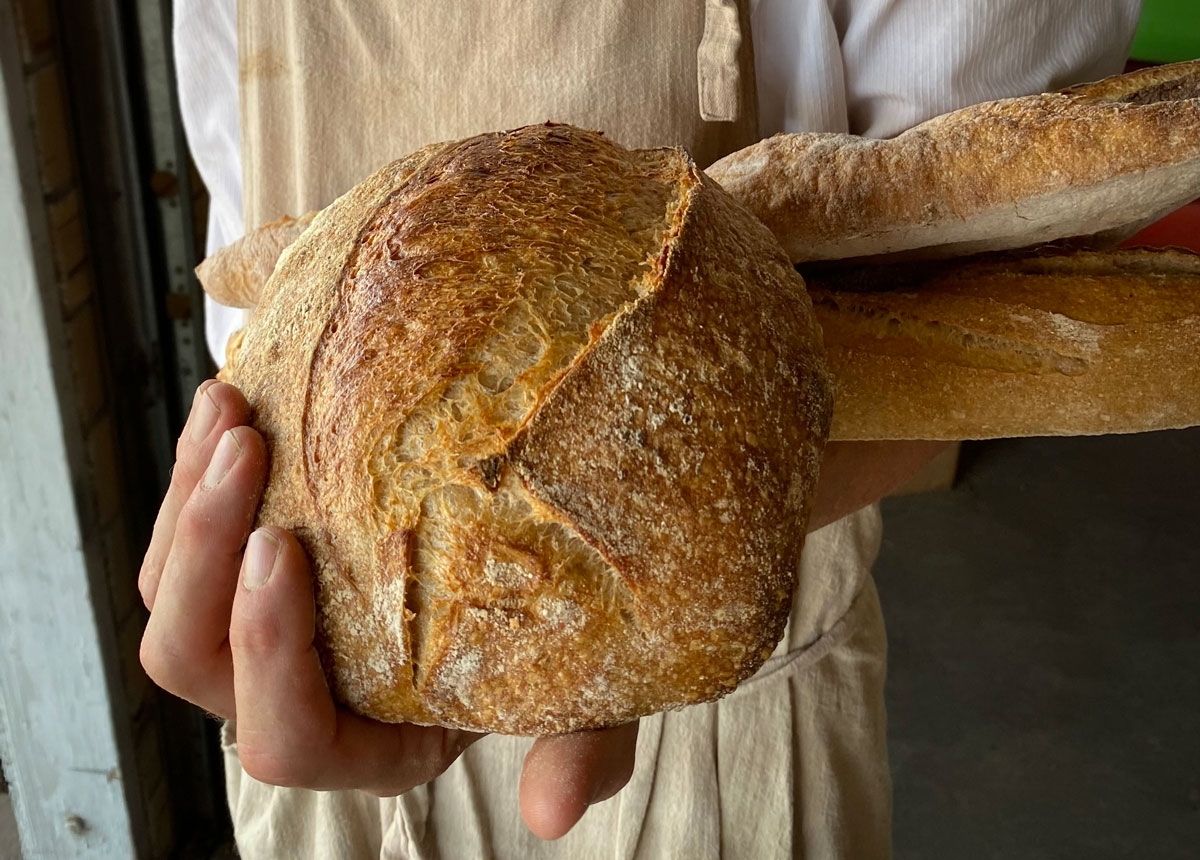 Article and photos by Ada Broussard

I visit Bakery JoJu on Wednesday, a baking day. Like an eager hound, I follow the warm, nutty smell of baking bread. As I walk alongside the building toward the entrance, I notice the next-door neighbor’s noisy troop of enthused Yorkshire Terriers, and can’t help but wonder if the incessant breeze of artisanal bread drives them mad or keeps them calm. How much hound is there in a terrier?

The large warehouse that houses Bakery JoJu, once a Lonestar Beer distributor location, is now home to a mélange of enterprises. There’s a garage space where a limousine is sometimes stored, a cabinet maker hidden in the back, presumably near the cans of wood scraps, a CPA, and last but certainly not least, the series of rooms where Josh and Julie Raymer, owners of Bakery JoJu, make their bread. This random assortment of business isn’t unlike the current landscape of Fredericksburg itself – limousines to drive the wine-drunk visitors, custom cabinetry to welcome the newcomers, a CPA helping to steer the growth… and a couple of ambrosial bakers, there to keep everyone happy and nourished, full bellies of rye and wheat.

Humans have consumed grains for thousands of years, and for nearly as long, bakers have occupied a central role in communities; one baker often tasked with the breadmaking for many. Despite the sourdough craze that came and went during the pandemic, even the most industrious home cooks often buy, instead of make, bread. Add to that the fact that Josh and Julie mill around 40% of their own flour, and it should be clear that bread is best left to them.

The majority of the JoJu magic happens in one of two rooms. On my visit, we spent most of the time in a small, rectangular-shaped room. There are two large ovens that have dutifully warmed the room to several degrees above comfortable. The walls are cream brick and soft yellow tile, emphatically vintage. Accessories include haphazard piles of just-emptied proofing baskets, a couple of long wooden paddles to move the hot bread around, and a wall of wire shelves lined with just-cooling toothsome sourdough and sweet cranberry-walnut loaves, rich, brown crusts protecting soft, airy centers. The room hums in golden hues, and smells that way too, but by the time I leave, the bread has already disappeared, out for delivery to Fredericksburg’s La Bergerie and Fresh Pickens where it will be sold as to customers, as well as to Farm Connection, a farm-to-table delivery service in San Antonio.

Josh and Julie are baking around 250 loaves on this day, about average for a Wednesday, one of their big baking days of the week. Josh assuredly taps on a sourdough loaf that he’s checking for doneness, “Sounds good. Like a cheap door.” I’m surprised by the fact that there is an auditory cue, specifically that of a hollow core door, involved in making such delicious bread, but of course there’s a lot I don’t know about how JoJu manages to pack so much flavor into one small bundle.

The Raymer’s bread journey started innocently enough. Josh, a Houston native, worked in and around restaurant kitchens since he was 14 years old. After some years cheffing in Colorado, he moved to Austin where he met Julie, who was a floral designer. It was the late ’90s, and Austin was young. Josh and Julie fell in love and started a family, and in 2004, they decided to relocate to Fredericksburg where Josh took a job as the executive chef of Navajo Grill. The menu had a farm-to-table ethos similar to Josh’s own, and many of the vegetables and proteins were being sourced locally. The bread? “We were using a par-baked product which was fine, but it just bothered me. Like, I know where the pig comes from… I can tell you all about the goat cheese. I can tell you all about the tomato. But then this [bread] comes from California.”

Josh began to make simple flatbread and table breads for Navajo Grill and in his own words, “I became obsessed.” With one kid at home and another on the way, Josh had only ever worked restaurant dinner shifts for his entire adult life – a schedule less than conducive to starting a family. The bread life was calling, and around 9 years ago, Josh and Julie answered.

Whereas the baking room is all golden and yellow, the other niche in the bakery is crisp and white. Against one wall is the mill, an existence that bestows Josh with a designation as a miller-baker. In the echelon of bread-obsessed, miller-bakers, or those bakers who choose to grind raw grains into usable flour, sit comfortably at the top. The mill looks simple – the top is a sleek-looking funnel shape, connected by a drawstring sleeve to a plastic bin underneath. Somewhere at its core hides a granite stone which grinds whole berries of cereal grains like Sonora, Turkey Red, and Yecora wheat into fine (but not too fine) flour. Like a powdered donut, everything in this vicinity seems to be dusted in a white veneer, though a more careful look at the freshly milled flour reveals a mixture more nuanced than just white: flecks of tan bran, the seed’s outer shell, sit amid the endosperm and germ. Whole berry to whole wheat… and sometimes rye.  While I idly lean on a stainless-steel table, Josh keeps working and unrolls a piece of canvas called a “baker’s couche” and begins to expertly form a neat line of baguettes. Slender, pale dough snakes swiftly emerge and are set on the woven cloth, an important step to ensure thin, crackly crusts.

Most commercially produced flour is ground using industrial roller mills; during processing, some of the grain’s inherent qualities are stripped out – primarily to create a product that is more shelf stable. But the majority of the flour Josh uses, both that which he mills himself as well as that he sources from Barton Springs Mill located in Dripping Springs (also where he buys his grains), is something different – a fresh product that seems more alive than dead.

In the same way that many chefs make an effort to find local farmers growing the best tomatoes, Josh, with the help of Barton Springs Mill, has managed to tap into a network of Texas farmers (and a few in Oklahoma) that are growing organic grains that fall into the heritage and landrace category. Some would argue that these heirloom varieties are inherently more flavorful. For his part, Josh focuses on the increased flavor that you can garner from the milling process itself, “Whole wheat that you mill on a stone mill is milled cool. All the germ is in there. All the oil, all the flavorful, good-smelling, yummy things are in there…  I get to mill, and then take that milled flour and I get to make bread with it… It all stays in it. Aromas and all.”

If you’re lucky enough to meet either the Jo or the Ju of JoJu, you’re in for a treat. Josh and Julie are warm and friendly, and when you consider how delightfully their affable dispositions pair with their delicious bread, it feels like the happy ending of a tale starring the farmer, the baker, and the candlestick maker. As a gluten lover myself, it’s easy to ennoble JoJu’s role in our community.

I ask Josh about this idea and he admits that there is an element of romanticism involved in his trade, “You don’t do this without having some kind of, you know, Don Quixote kind of thing happening, right? It doesn’t make any sense. It doesn’t make any money. I mean, I pay my bills…I’m really lucky. But if I just bought bags of flour, I could charge the same amount of money [and] could save so much labor.”

But bread only seems worthy of the modifier ‘artisan’ if the ingredients – the parts to its whole – are truly precious, themselves. “It’s incredibly rewarding to make those connections,” Josh says of knowing both the grain producers as well as the customers eating his bread, “So yeah, I feel like I’m part of that. I don’t know that I’m the hub, but I do feel a connection.”

Salt of the earth bakers, and a salty and herb-infused pool of olive oil is all you need to turn a loaf of fresh, chewy sourdough into a rustic meal for two. Diet culture has had its way with so many of us, making us tremble at the thought of carbohydrates. If you’re eager to shed its grip and enjoy the nutritious energy that can come from bread, might I recommend a JoJu focaccia, so flavorsome I usually buy two – one to tear and eat on the way home, and another to share. JoJu’s theoretical position as a baker central to the community feels less metaphorical when you see the buzz around their stand at the year-round Kerrville or seasonal Fredericksburg Farmers Market – the setting that makes them familiar faces to so many.

In addition to selling (out of, usually) several different types of freshly baked bread, they also make pizzas that puff up in a blazing wood-fire oven in a matter of minutes. It’s clear that people flock for the bread, and the pizza, but also the bakers.