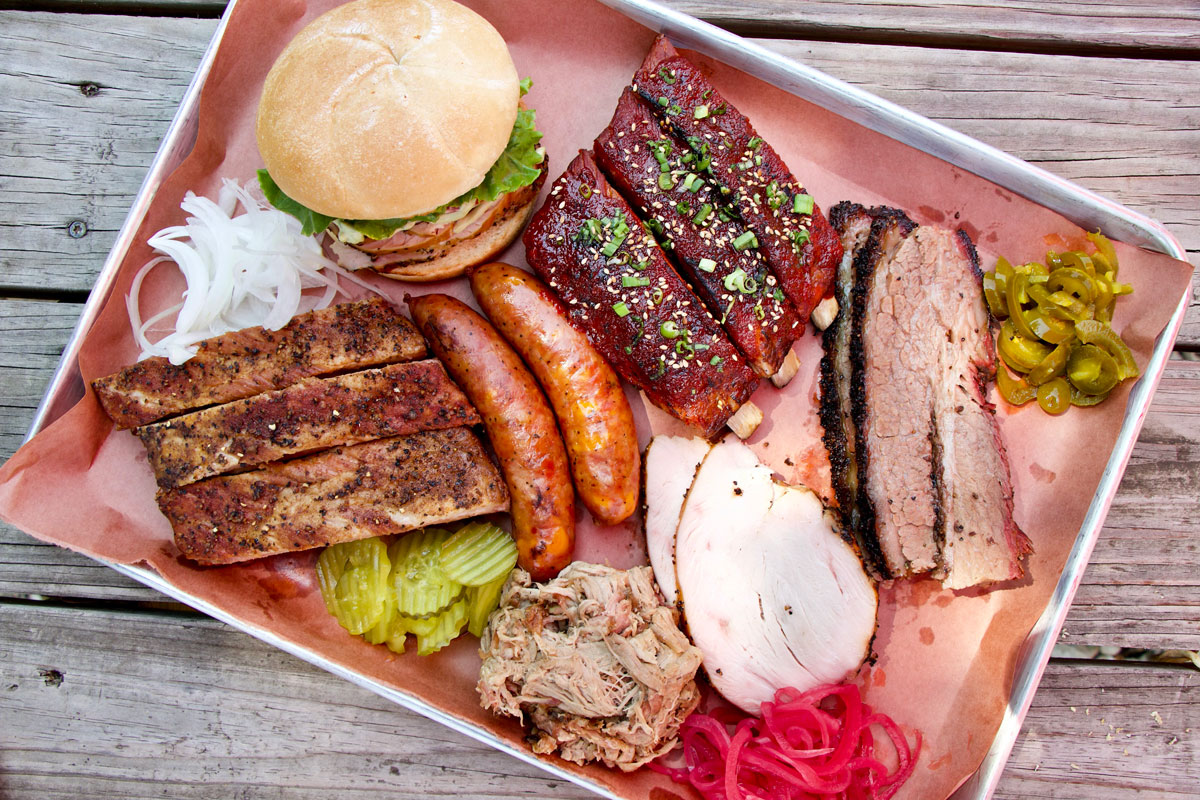 Houston barbecue finds a home in the Hills

In Texas, it feels fair to judge barbeque. Be kind to your neighbors, follow the golden rule, sure. But by all means, be fiercely judgemental of your barbecue. Perhaps you’ve waited in a six-hour line for what you were told is “the best” brisket, and all other cuts are weighed against that plate. Or maybe you can’t help but compare each potato salad to your mother’s. Wherever your bar, we’re happy to report that Fredericksburg is now home to a barbeque joint we think will certainly meet judicious standards, if not surpass them. Meet, Eaker Barbecue.

Owners Lance and Boo Eaker opened the doors to their Fredericksburg restaurant this past June. The couple is always there, Lance checking on the mammoth smoker (named Mrs. Lucky) or maybe slicing brisket, and Boo serving up sides or visiting with patrons, a generous serving of which they already have – a feat considering the fact they’ve only been open a few months. The new eatery seems to be calmly smoking along, but for Lance and Boo, owning a brick-and-mortar restaurant is a new adventure since the two started out as (food) truckers.

Before barbecue, Lance worked in IT and Boo had a job as the head designer at a children’s clothing line based in Houston where the couple lived. Boo’s 15-year career with this company was a good one, and given its stability, it seemed unreasonably reasonable for Lance to leave his career and try his hand at owning and operating a food truck – a move that would push his backyard obsession to a business. I asked Boo about the details of this transition and we started talking about her father, who with her mom, traveled from Korea to Houston to lend a hand after Boo and Lance’s first son was born.

“My dad was always the guy…if I’d make Italian food for dinner, he’d say, ‘This is so cool. You need to open an Italian restaurant’… and whatever we’d do, he’d tell us we need to open a restaurant.” The family would joke about the idea, encouraged by Boo’s father’s enthusiasm, but it was always in jest.

In 2016, Boo’s father passed away and while spending time in Korea for the funeral, Lance and Boo stumbled across a Texas-style Barbecue restaurant in Seoul, ironically owned by a Houston couple. The barbeque was good, and the restaurant’s existence, inspiring. The two considered moving to Korea, but ultimately Houston was the chosen home for what was to be Lance’s forthcoming food truck trial. For her part, Boo was settled in her job in fashion.

Sometime around the end of 2016, she remembers telling Lance, “You know what, if you want to do it, just go ahead and do it.” Not two weeks after picking up their large new food truck (and making a harrowing journey home, in 5 o’clock Houston traffic), Boo unexpectedly lost her job.

Suddenly, barbeque was the Eaker family’s livelihood. Boo shrugs and smiles remembering the huge jump. “I guess we’re that kind of people… We committed,  and we just don’t look back, and we just go.” The two have a spirit of tenacity that would surely make a father proud.

Over the next couple of years, Boo and Lance entered a BBQ truck gauntlet. For a brief moment in their college years, Lance worked at Subway and Boo at Quiznos, but this education in fast sandwiches was the extent of their restaurant experience.

Sourcing, pricing, marketing, and cooking to scale was all a learning experience for the couple, and this period in Eaker Barbecue’s evolution was glazed by very long days that turned into nights.  Briskets go on the pit at 6 a.m., and because the truck was often serving at Houston bars, service bled into the wee hours.

Craft barbecue in Texas, not unlike craft beer, has a cult following. Once the quality of Eaker Barbecue was sampled by enough Houstonions, Lance and Boo found themselves surrounded by a community consisting of fellow pitmasters and hungry diners, alike. Eaker entered into barbecue events and competitions, and won awards, including first place in the people’s choice category of the HOU vs ATX BBQ Throwdown. In addition to bragging rights, the couple was bestowed a trophy featuring an adorable miniature BBQ pit, an accolade you can see when you visit their restaurant.

The pandemic wreaked havoc on Eaker’s usual truck locations – large office buildings and crowded bars – and so Lance and Boo began to set up in a church parking lot. Business became centered around neighborhood customers and friendly supporters who were visiting the truck “way too often,” as Lance put it. “We knew that the food truck was going to be like boot camp for us… but what we didn’t realize is that the last year [marked by Covid’s impact on the industry] was going to be like special forces training.”

Lance tells me about the menu shift that happened during this time, “We thought, we can’t keep just giving them the same thing…. So that’s where Boo said, ‘All right. I’m gonna stretch my wings. We’re gonna have some fun.’”

By the end of 2019, Boo and Lance started to think about the next step: graduating out of the truck, into a restaurant, and out of Houston.

Eventually, the two landed on Fredericksburg, and just a couple of weeks before the winter storm, the family, including their two sons and Boo’s mother, moved to the ’Burg. “I can literally write a book of things that happened that weren’t supposed to happen to lead us here,” Lance tells me, “And all of the things that we did, and that three years [of running the food truck] prepared us for this. We saw nothing but barriers for the last three years that we just had to crawl and push over to make it work. And then we got here and things just started falling [in place] for us… The road got easier to walk down.”

Lance and Boo, despite undergoing three tiresome years of trucking, aren’t hardened by their time in boot camp. To be sure, they are still currently living the life of long hours babysitting a smoker and risky startup costs – a great unknown – but their fresh dining room only hangs heavy with hospitality and immense enthusiasm for what they’re building.

At Eaker, everything is made from scratch, and several of the menu items draw inspiration from Boo’s Korean heritage, like fried rice and the housemade kimchi, a fermented pickled vegetable medley and a perfect foil to rich meats like moist brisket and juicy sausage.

The queen of the menu, for me, was the gojuchang ribs – pork ribs that have been marinated with homemade gojuchang, a fermented Korean red pepper paste that is equal parts warm as it is sweet, that are caramelized with a blow torch when plated. I was delighted when the sliced ribs were garnished with a sprinkling of green onions and sesame seeds – a confetti of fusion flavors that can be difficult to find in small-town Texas.

There are mainstays like sliced turkey, chopped beef, and pulled pork, all done exceptionally well, in addition to rotating specials like brisket tacos featuring homemade tortillas made with brisket tallow, and japchae (Korean sweet potato noodles). The back wall of the dining room is one big window that looks out into a screened in pit room, an honest showing of Eaker’s craft as well as the beautifully patinated pit, or the hearth of the operation. Just next to the rowdy firebox, there is a neat stack of mesquite, the primary hardwood of choice and an homage to Lance’s South Texas roots.

Lance takes time to show me the impressive tank, “It’s not just a hunk of metal melted together. Everything is engineered.” We peek at a brisket whose prized bark is readily forming. Lance explains that the coarse spices on the outside of the meat dutifully capture the airflow, and imbue flavor, on tomorrow’s lunch.

It may take a few visits to try everything on the menu, but the one requisite to each and every visit is undoubtedly the boozy (not for kids) banana pudding which is so delicious I wonder if I should serve it in lieu of my wedding cake.

When you visit Eaker Barbecue, you’ll walk through an entryway featuring a gallery wall of dimensional square photos. There are Instagram-worthy shots of tantalizing plates, fusion dishes, friends, and family, all surrounding a wooden sign that says, “Every family has a story. Welcome to ours.”

“We got this at Hobby Lobby,” Lance tells me. There is room for more photos on the gallery wall, and in no time, the Eaker’s will fill the space with Hill Country memories and big plates of delicious barbecue.