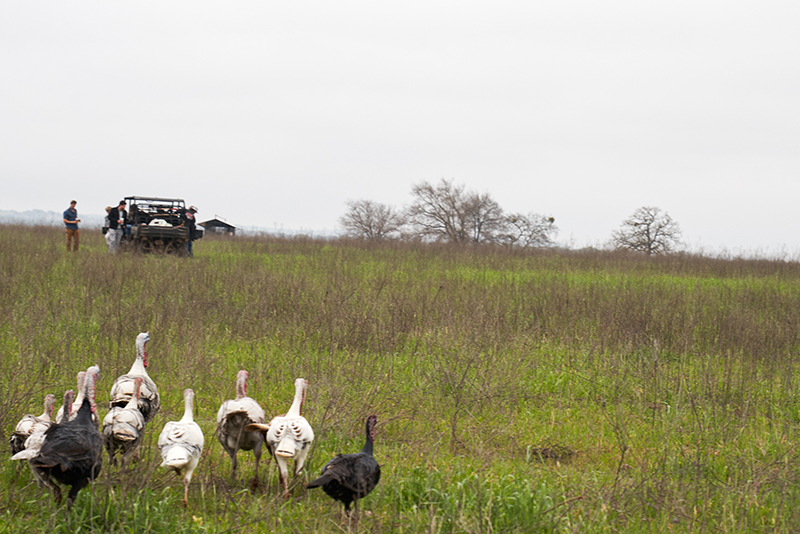 In a spare room usually home to gym equipment, Taylor and Katie Collins, owners of Roam Ranch in Stonewall, incubated and hatched several hundred turkey eggs. Thousands of fans watched the sweet saga on Instagram. It was hard to look away as the doddering, wet chicks pecked their way into the world while the couple’s Taylor oldest daughter encouraged them along. Eventually, the chicks were moved outside where they became a part of Roam Ranch’s holistic grazing operation which uses thoughtful animal impact and rotational grazing to enhance soil health.

For the past six to seven months, the turkeys have wandered, gobbled, pecked, and scratched their way into maturity, gearing up for their day in the limelight. Roam Ranch is a multispecies operation, but their poultry usually takes a backseat to the noble herd of North American bison which the ranch is known for. But for the past four years, the turkeys have had their day, albeit a final one, via a unique event in which participants are invited to the ranch to catch, kill (using a non-penetrating bolt stunner), eviscerate, and defeather their own Thanksgiving turkeys.

The event takes place just a few days before the holiday, and in addition to a fresh, ready-to-brine bird, participants leave the ranch with group photos and a Ziploc bag of painterly feathers — memories of the day that cement it as reality and not just a pumpkin-pie induced fever dream.

“It’s probably our favorite community event we do every year,” Taylor Collins tells me when we chat about the harvest-your-own experience. “The intention and the purpose behind it is really to just help consumers connect to the land on which their foods are produced as well as the animals which they consume, which are sacrificed their life to sustain their families.”

While some families devotedly run 5Ks on Thanksgiving morning, others have decided to make harvesting their own turkey a part of their annual tradition. “Each year it’s more than 50% returning families,” Taylor tells me. The $150 ticket covers the cost of one turkey, plus an experience for the whole family. It’s often a multi-generational affair, admittedly more memorable than a group trip to H-E-B, and more akin to romantic notions of earlier times and simpler food systems when entire communities would come together to harvest large livestock and wild game. “In many circumstances, these are people’s first time to ever see an animal die, let alone one they kill, let alone they’re going to eat it together. And it’s so grounding.”

Recounting his family’s experience harvesting a turkey on a cold and windy day, John Washburn remembers the experience. “What really struck me was how humane the entire process was. Our children weren’t shocked by it, and I think it actually was a really great opportunity for them to kind of see where their food comes from.” His middle daughter was particularly interested in the event, “she wasn’t afraid to handle some of the organs when I was pulling them out… she was helping to pluck the animal.”

Fast forward to a few days later, and John’s family served the turkey on a table decorated with the colorful feathers they collected from the butchering process. “There’s really no feeling like on the Thanksgiving table, being able to just look at it and say, you know, we did this. Obviously, we didn’t raise it, but you know exactly where it came from. You’re a part of the entire process.”

This year’s hatched eggs were laid by heritage breed hens with names like Narragansett and Royal Palm,  the latter of which is a stunning bird of snow white and ink blank patterned feathers. Unlike poultry raised in a conventional and very confined setting, these birds were raised on pasture where they had the ability to live like a turkey — flying, walking, running, and mating when they pleased.

And mate they did. Most of the hatched turkeys on this year’s menu are the result of wild and colorful Rio Grande toms mating with the domesticated, heritage breeds. “They are really special,” Taylor says, “really adapted to our eco-region and have a really good representation of the flavor of Central Texas poultry production.”