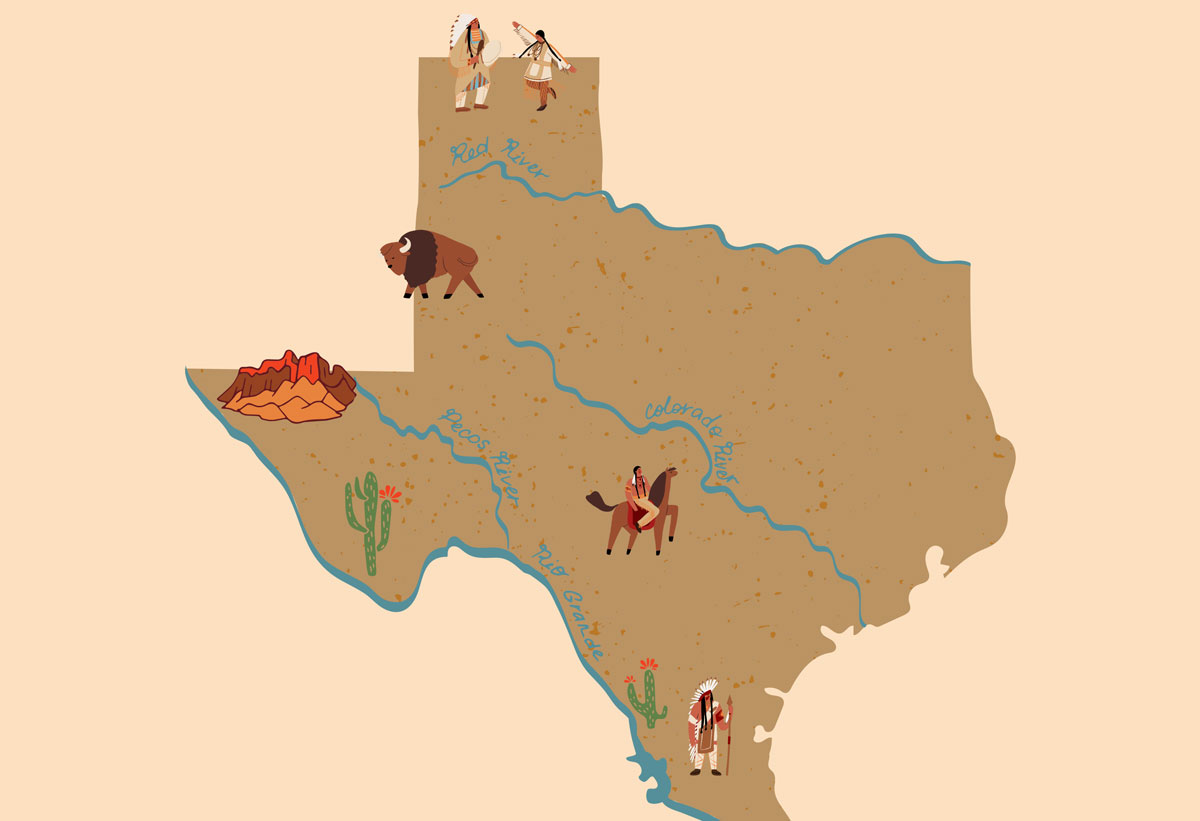 Indigenous peoples of Texas have always been here

In the picture book “Turtle Island ABC: A Gathering of Native American Symbols” by Gerald Hausman and illustrated by Cara and Barry Moser, X marks the crossing place — where trails intersect, where rivers meet, where travelers choose. We’re at a crossroads in our relationship with Texas’ Native American population. For a long time we drew an X across their existence, but they were always here.

We just don’t teach it. Even with requirements for students to take Texas history in fourth and seventh grades, much of the information is inaccurate.

“In one fourth-grade textbook they were told that the Karankawa were dead and no longer in Texas and that they were cannibals,” said Dr. Circe Sturm, professor of anthropology and Native American and Indigenous Studies at UT-Austin. “I went in and offered a corrective lesson because I was so saddened by what was happening.”

And yet names of Indigenous tribes are dotted across the state: Caddo Lake, Nacogdoches, Waco, Waxahachie. There are pictographs near El Paso and in Palo Duro Canyon. Near Seminole Canyon State Park is the White Shaman Mural.

“It’s stunning. One of the greatest pieces of rock art in North America, and it’s in Texas,” said Sturm. “The central figure is over 30 feet tall. The mural is 60 feet wide.”

Texas has the fifth-largest Indigenous population in the lower 48 — the sixth-largest, counting Alaska. But we don’t think of ourselves that way.

“No one thinks of Texas as American Indian country, like New Mexico, Colorado, Arizona, Oklahoma, with their vibrant Native American communities,” Sturm said. “There’s this perception of Texas as not being a place where there are Indians, no Indians left. It’s really, really wrong.

Part of the reason for that discrepancy is that the state only has three federally recognized nations: Pueblo of Ysleta del Sur (known as Tigua), in the southwest; Kickapoo, on the Mexican border; and Alabama-Coushatta in the southeast, whose reservation was established by the Republic of Texas in 1839. These are small tribes, so their presence often goes unnoticed.

The Lipan Apache, originally composed of many bands, is the only state-recognized tribe, with families living in places like San Antonio and McAllen. Each state determines its own method for recognizing a tribe, and Texas has not put a lot of effort into determining who lives here.

“The state claims they’re extinct, but people are coming together and asserting identity,” Sturm said.

But there are many more unrecognized tribes, and Sturm and her students are working to map Indigenous Texas.

“There’s no good source on Indigenous Texas history. There’s a lot to discover,” she said.

Her students are finding evidence of what Sturm calls “hidden tribes.” Like the Atakapa Ishak clans in the area between the Gulf Coast and the Big Thicket. They survived being exterminated or removed to Indian Territory in Oklahoma by moving to swamps, places white settlers didn’t want to live.

Other members of larger nations — Cherokee, Choctaw, Comanche — have been quietly returning to Texas for decades.

“There are a lot of tribes in Oklahoma, federally recognized, who see Texas as their homeland,” Sturm said. “There was a program, the Urban Relocation Program in 1952. It was the federal government trying to detribalize American Indians and move them to urban areas and start jobs. It was voluntary but involved a strong-arm. There were incentives in place. It was an effort to get them out of Indian reservations, so about 40,000 moved into Dallas and Houston. Many have been here for several generations.”

“A lot of those people were assimilated into Hispanic identity. So they took on European names, Spanish surnames. They were speaking Spanish anyway because it was all over that region,” Sturm said. “They were detribalized in another way.”

Some of them continue to hold dances and ceremonies even though they are not recognized by government entities. Now they are making themselves known.

“In the last couple of decades more of those communities are reasserting their presence in the state,” Sturm said.

Several Coahuiltecan clans have lived for thousands of years in an area stretching from Coahuila, Mexico, to the Edwards Plateau. Their language still exists but is spoken by fewer than 1,000 people. Among their sacred water sites are Barton Springs, Comal Springs, Spring Lake, and the headwaters of the San Antonio River.

“It’s a series of springs they associate with the origin and birth of themselves as a people,” Sturm said. “There have been many different tribes vying for Austin. If you took a snapshot in 1700, 1750, 1800, 1850, you’d find different Indigenous people overlapping the same territory at different times.”

More people who have discovered their Native American ancestry are learning what that means for their identity. Sturm is a descendent of the Mississippi Band of Chocktaw Indians, through her grandmother. But growing up in Houston and then attending UT-Austin as an undergraduate in the 1980s, she felt cut off from the Indigenous part of herself and her family.

“I was wanting to take classes on Native Americans, but most of it was history. I thought, ‘There’s nothing here for me,’” Sturm said. “I remember walking up and down Shoal Creek, and it was there that I found historical markers that I found offensive, as a young person. That sense of erasure in the state was troublesome and part of why I chose to go to a place where I could do Native American studies [at University of California-Davis] and taught at University of Oklahoma, to be in places where I fit a little better.”

Then, at her own personal X in the road, Sturm came back to UT-Austin, to help launch a Native American and Indigenous studies program.

“I felt like I was coming full circle, to correct some of the issues I felt as an undergrad. It was an opportunity that felt right,” she said.

Sturm had a clear understanding of her heritage. For a lot of Texans, it’s real but a bit murky. For C.B. “Hoppy” Hopkins, ancestry tests confirmed what family oral history had already told him.

“Anybody whose family has been in America for 400 years. According to the ancestry test, I’m a little bit of Shawnee, Lumbee, Cherokee, Black. I’m a skeech bit Indian, but the Comanches let me hang out with them,” he said.

Hopkins lives just outside Fredericksburg and has been involved in restoration of historic buildings since the 1970s. He calls himself an “accidental historian.” Fredericksburg calls him a local expert, especially on the Comanche, who lived here when John O. Meusebach and the German settlers came.

In school Hopkins learned a more complete version of Texas history than was in the textbooks.

“I had a teacher four times over in my middle and high school years who was German with a Cherokee grandma. She didn’t read to us out of the book,” he said. “I learned a lot of Texas history that most folks then didn’t get. Now it’s even more lacking today.”

That history reveals a lot of intermarriage between settlers and Indigenous people. That includes Sam Houston, who married a Cherokee woman. It also includes some white captives, like Herman Lehmann, Cynthia Ann Parker, and Rudolph Fischer.

The possibility of intermarriage was one of the remarkable features of the treaty in Fredericksburg. In a 2008 document titled “Meusebach and the Comanche,” Hopkins wrote:

“Why was it that this treaty was successful? Most treaties amounted to a conditional surrender. This one did not. It was more of an affirmation of a relationship, accepting each other as equals. It acknowledged racial differences as a distinction they chose to not recognize. It acknowledged cultural differences with a promise to learn, understand and accept each others’ cultures and to reinforce that understanding thorough inter-marriage. (Descendants of those marriages visit Fredericksburg today, five generations later.)”

At the time of the treaty — 1847 — over half the Anglo population in the Republic of Texas was German, and the Comanche, due to their strength in horses, were the dominant tribe. Their empire stretched beyond state borders. Virtually every tribe in Texas was either an ally or an enemy of the Comanche, so a treaty with them influenced relations with other Native Americans.

Sturm points out that the treaty between the Comanche and the Germans was unusual because most treaties are made by government entities, nation to nation. This treaty was between people who were disposed to be enemies.

“The way the settlers chose to deal with this issue was not to be violent but to treaty. It’s unique in Texas, dealing with another major player with diplomacy, rather than what most Texas communities were doing: to fight, to resist, to raid back and forth,” she said.

Diplomacy resulted in cooperation, protection, and trade — moccasins for the soldiers in the mounted infantry located at Fort Martin Scott, and honey from the Penateka band of Comanche, the “honey-eaters,” to be used in curing hams.

Over the years Hopkins has been the liaison between Fredericksburg and the Comanche living in Lawton, Oklahoma, some of whom are descendants of the treaty-signers. He’s not surprised that the two groups found ways to celebrate their similarities and get along.

“The Fredericksburg-Comanche relationship stands out as a superlative example on how two apparently dissimilar cultures can get along,” Hopkins said. “That’s not as big a mystery as people like to make it.”

It’s not that hard to solve for X. It doesn’t have to mean we’re stuck. X can be the junction where we change direction.