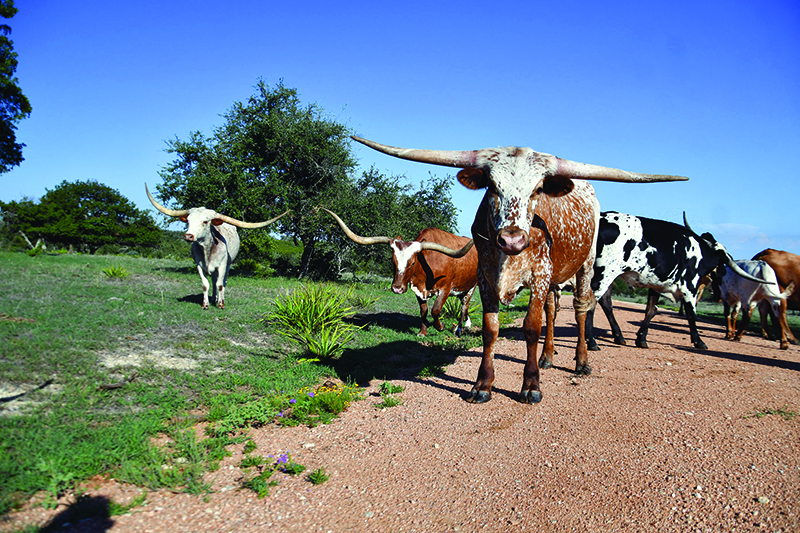 John Hever steps down out of his Ford F-250 about halfway up a gentle hillside and loud “Hooooooooooo.” Soon, a herd of roughly 20 Texas Longhorns make their way through the mesquite and brush, their horns visible first at a distance, then those recognizable coats of many colors coming into view.

The cattle know protein cubes are in store, but Hever says their saunter to the feed area is a bit less desperate than in the past few months, thanks to a recent two-inch rain in this driest of years. The grass has greened now, and the hearty breed hasn’t had to resort to eating the tunas on prickly pear cacti, with the scavenging self-sufficiency they learned over the centuries. Still, they are survivors.

“I have never spent so much money at the feed store,” he reflects on this drought-plagued year. “And you still look at the cows and say, ‘Wow, I feel so bad for you.’ But look at it now. Yeah, a couple of inches helps.” Between the 2021 freeze, which took out thousands of trees, and continuing battle with oak wilt, it’s been a rough time for ranching. But like their herds, these ranchers are a tough lot.

Hever said he prefers the Longhorn breed over all others. He and his wife, Susie, based in Dallas in the 1990s and thriving in a sales career, purchased land near Fredericksburg almost 30 years ago. They bought 10 head of mixed cattle to qualify for the agriculture exemption on the land. (He tried goats, but says, “They left. They just walked out. It’s safe to say I’ll never have goats again.”)

Most of his initial batch of cattle were a Black Angus cross, typical auction house offerings. But two were longhorns and he began to admire the lore and the legend. “I started to gravitate toward the longhorns because they were a little quicker, a little more athletic. And, of course, they’re attractive. So I started going to longhorn auctions. And that’s it once you do. They are like Lay’s potato chips (can’t eat just one). Then you want certain colors, certain families and different sized animals.”

Hever ticks off information about his herd’s colors, horn structure, lineage and other details he knows after three decades of working with them. He points out one young calf who has good color, height and build. “He’s gonna be a good specimen.” He remembers which breeder he got them from, how much he paid, and punctuates the stories with quips and an infectious, high-pitched laugh. He loves these animals. “If I had to raise Angus, I wouldn’t do it. I might instead go back to playing golf,” he said, laughing.

Longhorns, of course, are as iconic as Texas. The breed is recognized around the globe, almost synonymous as the Lone Star state and cowboys, and is known for strength and steadfastness, a hard-won reputation after surviving on their own in the South Texas brush country. Their recognizable horns helped them survive predators and still help them fend off mountain lions or keep coyotes away from their offspring. J. Frank Dobie, the mid-20th Century folklorist author, wrote of the breed: “Had they been registered and regulated and provided for by man, they would not have been what they were.”

Dobie’s book outlines the history of the breed, which was brought over by the Spanish in the early 1500s. Explorer Hernan Cortes had a great estate in Mexico named Cuernavaca (“cow horn,” appropriately). Some years later, Coronado drove cattle north to enter what is now the U.S. He left some of the exhausted animals in Sinaloa, then “twenty-five years later, [Francisco de Ibarra] found cattle running wild by the thousands.” A Frenchman in 1767 noticed west of the Brazos River “horned cattle, originally tame, that long since became wild and now royal in large herds all over the plain.” Dobie’s tome recounts the skill of vaqueros who roped the longhorns out of the dense thickets of the South Texas brush country. In the late 1800s, old-time vaqueros took to calling them “mesteñas,” or “Mustang cattle,” describing their wildness.

“They were the currency for Texas after the Civil War,” Hever adds. But they were almost lost because “10 million head went up the trail” to Kansas City slaughter houses. Barbed wire was invented and the plains were sectioned off, killing the cattle trails. Consolidation and big industry took over the processing houses.

The breed neared extinction — Hever says even to a more perilous level than the buffalo. Once the railroads replaced cattle drives to transport them north, the horns proved a detriment, taking up too much room on box cars. The leaner beasts fell out of favor with breeders. In the Larry McMurtry book, “Horseman Pass By,” (and 1963 movie “Hud,”) the rancher grandfather is devastated by an infection of hoof-in-mouth disease and reflects on two longhorns that are left in his pen which he will kill. The scene was nearly a metaphor for the life of the entire breed. “Lord, but I’ve chased them longhorns many a mile. I don’t know if I can kill them … but I guess I can. It don’t take long to kill things, not like it does to grow them.”

Even today with travel trailers, longhorns prove difficult to haul, sometimes cutting up one another with their horns. “It’s pretty amazing how they might have just faded off into nothing,” he says of the breed that could have been talked about like dinosaurs. “But there are a few real dedicated breeders that have good backing and they can afford to put up with the ups and downs in the market.”

Today, breeders continue to refine the traits of the Longhorn, though the beasts are far less of scavengers than they used to be. They’re heavier today due to better feed but remain sprightlier than most breeds. Hever says those on large West Texas ranches — which remains a popular place to raise them — can walk 15 to 30 miles a day in search of water. Large breeders, such as Red McCombs, Derol Dickinson in Ohio and Bill Hudson, of Kentucky, are industry leaders. The Y.O. Ranch and the Schreiner family both kept huge herds.

Hever says finding a newborn calf can be like Easter egg hunting. It’s a genetic crapshoot as to which color or which dappled hide pattern will appear. Unlike the horn structure or build, it’s a wild guess. “You would think that since you know all the moms and the bull, it would be easy to figure it out. But you look at it and think ‘whose calf is this?’” David Hillis, a professor at the University of Texas, did an article for a longhorn magazine on the predictability of color. “David’s a character and a true professor. So, I read the article three times and at the end, it basically tells you there’s no predictability,” Hever said with a laugh.

Some who raise the breed keep them as decorations on their ranchettes, small plots of land that can still qualify for tax exemptions with the right number of animals. Hever always cautions the newbies to lease a bull for reproduction — don’t buy one right away — or they’ll spend all their time repairing fence and chasing them.

“Cattle-nomics” is not an exact science, but Longhorns can be as profitable as any breed. Hever sells to the newcomers, many of whom don’t realize what a high-dollar heifer can cost. Today, the trade is fraught with other challenges, with land leases, supplies, a diesel truck, feed bills when the grass is scarce. Fortunately Longhorns don’t require as much veterinary care of some other breeds, so that saves some. “The English breeds, they rely more on man,” Hever said. “There’s a market for Longhorns. I lose money on eight out of ten animals, but those two that I sell give me an average price that puts me at or above Angus cattle.”

Hever has hopes of eventually providing a grass-fed Longhorn beef product, which is in demand by chefs and the beef-loving public. Its leaner texture is said to have lower cholesterol, even less than a chicken breast if raised on chemical-free grass. “There’s more fat on the beef than expected, but it’s 94 to 96 percent lean. The attraction to lean meat really kicked in since the pandemic. And people want to know where it came from, know the source, and what it’s been eating. All I give them is grass and they get protein. No hormones, no antibiotics, no shots. It’s just beef.”

Hever distributes some of his own meat products. But other distributors tapped the brakes on this specialty product when diesel gas climbed to $5.50 a gallon, and many were traveling to farmers markets from West Texas. The weather and market gods in 2022 conspired against Hever pursuing that goal. Still, he’s playing a long game and healthy beef products won’t soon go out of favor.

On another plot of land, RM High Hopes, his prize bull for the past decade, lopes down a hill from his spot in the shade. This majestic, 12-year-old, 1,900-pound bull favors his back leg and is starting to drop weight. He is in his last days, Hever says, but able to keep to himself since the grass came back. “He’s just pulling the old Indian stunt, laying under a tree until he goes,” he said.

Hever pours out some protein cubes for him. “We got a lot of good calves out of him,” he said. The bull was purchased from Red McCombs a decade ago, “the best money I ever spent,” he said. (“There is no negotiation with him,” Hever says.) RM High Hopes is scarred from rubbing against trees. Hever has already contacted the taxidermist to forever remember this bull. He will be replaced by H.H. Samurai, another standout with the best breed attributes.

Though the bull is in his last days or weeks, he has been a survivor, helping build the breed and helping it survive and thrive. They are survivors, having gone from surviving off cactus and hiding in the brush, to being bred across the U.S.

“The Longhorns,” by J. Frank Dobie. The seminal book on the breed by Texas’s folklore author. University of Texas Press.

“Frank Reaugh, Painter to the Longhorns.” Paintings and descriptions of the artist and his work in the 1880s. Texas A&M Press.

The “official” Longhorn herd for the State of Texas is kept at Fort Griffin in Albany, Texas. A herd was kept at the Lyndon Baines Johnson State Park and Historic Area in Stonewall until just a few years ago.