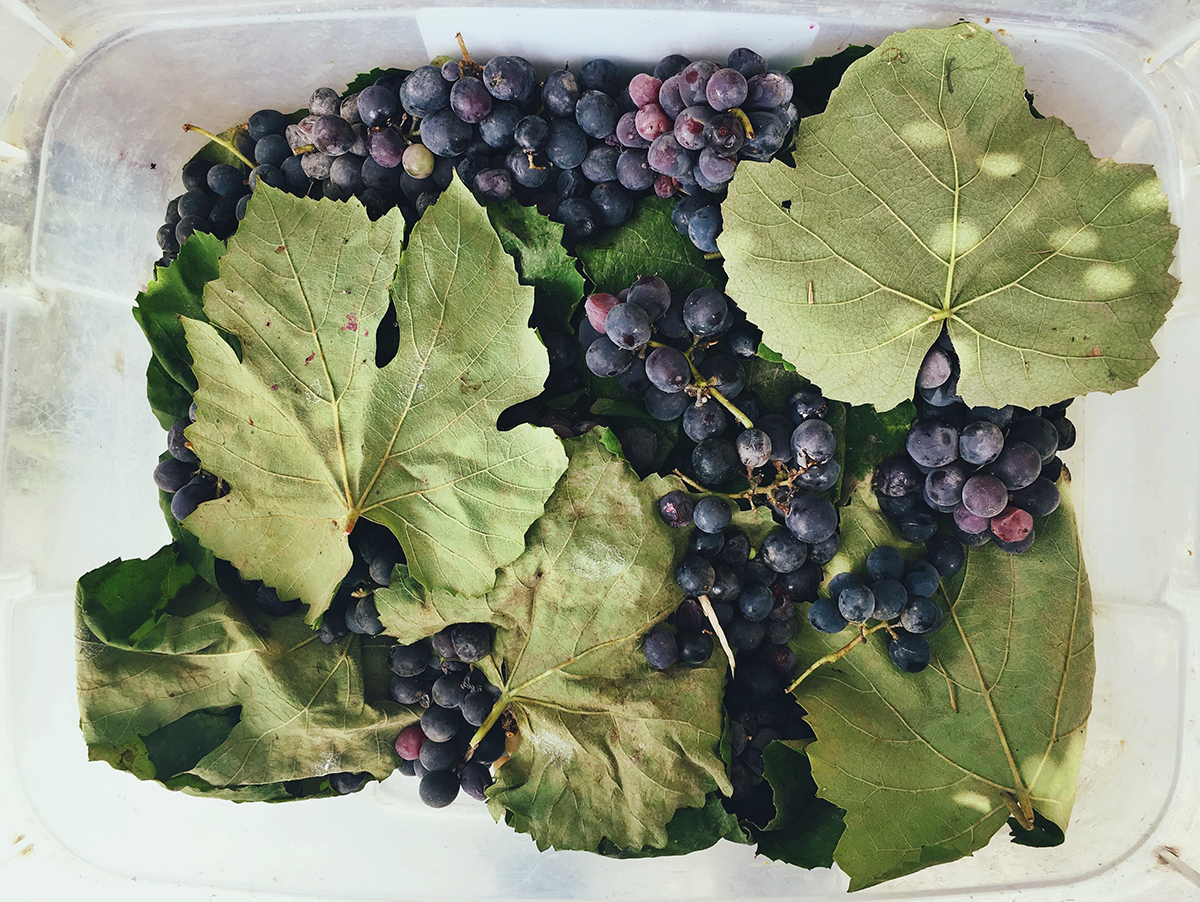 By Sheri Pattillo
Photos by Cassie Matias and Robbyn Dodd

There’s a buzz in the wine industry around what’s known as natural winemaking. Naysayers contend these wines don’t keep well and are funky in nature. Proponents acknowledge the risk, but believe the rewards outweigh the trouble. Each side can get defensive around philosophy and practice. Even the term itself is amorphous.

John Washburne, proprietor of Otto’s and La Bergerie in Fredericksburg, says, “I hardly ever use the term natural wine. I know it’s a controversial term for some. It’s not that I’m afraid to use it, but it can be a confusing term for people. Some people would say all wine is natural.”

The New York Times wine columnist Eric Asimov offers, “What is this movement? No more than a tiny collection of winemakers who, along with a motley crew of restaurants, wine bars, consumers and writers, prefer wines that are made with an absolute minimum of manipulation: grapes grown organically… then simply set forth along an unforced path of fermentation into wine, with nothing added and nothing taken away.”

I much more consider us to be minimalists. My goal is always to do less and less to
the wine. We do as little manipulation as possible.
–Regan Meador

A little more than ninety percent of Washburne’s wines fall into this category, and he would likely disagree with the term motley crew. With a good finger on the consumer’s pulse, he says, “I’ll use terms like minimal intervention or organic – a good supermarket term – because everyone knows what organic is at this point.

“At Otto’s we try to frame things in terms of it being good wine,” he says. “We get the wines into people’s glasses. If they seem interested in the wines and ask questions, then I’ll go down that rabbit hole and talk about it with them.”

Regan and Carey Meador, who relocated from Southold Farm + Cellar from the North Fork of Long Island near Fredericksburg, want their wines to speak of place and time. Their property includes a vineyard, a winery, and a tasting room perched high on a hill with a panoramic view of the Hill Country.

Known for making natural wines, Regan says, “I don’t even use the term. I much more consider us to be minimalists. My goal is always to do less and less to the wine. We do as little manipulation as possible. Wine is at its pinnacle when you taste something and think ‘These flavors are of that place.’”

In the cellar, Regan talks of strictly using native yeasts for fermentation. Many winemakers say that is risky because these yeasts have difficulty completing fermentation. Meador in his calm demeanor says, “I’ve learned patience in winemaking.”

Southold Farm + Cellar has 16 acres of rootstock planted and will graft a variety of vines onto it in the future. So far, they haven’t irrigated the vineyard.

“There is a reason why irrigation is outlawed in most European wine regions, aside from some allowing for establishment,” says Regan. “You aren’t getting a true representation of place, not to mention vines are often put into production far too early and forced into over production.”

Until his vineyard is fully established, Regan seeks out nearby vineyards, such as Robert Clay Vineyards in Mason. Quality and proximity are important to him.

“I like to be present throughout the growing season to feel the rhythm of it. You can start to see specific (vineyard) personalities come through, and you can tell if they’re growing tired or if they look like they could keep going into the season. It helps with picking decisions which in turn affects wine style.”

While natural might be a buzzword some producers use to ride a marketing wave, those like Meador who choose to make wines in earnest this way view it more as supporting their belief system. There is no clear definition or legal requirements for using the terminology. It is subject to personal interpretation, so it is seen as a movement rather than a prescriptive way of making wine.

Its ethos supports producing wines pure in flavor, demonstrating what took place in the vineyard in that vintage. The movement might be seen as a reaction to and an implicit challenge against over-extracted, over-oaked and manipulated styles commonly touted by wine critics such as Robert Parker of The Wine Advocate.

Adrienne Ballou, an up and coming winemaker in the Hill Country under her label Lightsome Wines, also leans toward a natural winemaking style. Like Reagan, she says, “I would say I’m more in line with low-intervention. I want to make wines that really are reflective of the vineyard site, of the vintage, of the fruit.”

Besides the lack of chemical treatments in the vineyard, other practices include hand-harvesting, native yeast fermentations, no additives, little to no use of sulfites, and not fining or filtering the wines. In a sense, it’s using a light touch throughout the process.

“Philosophically, it’s low-intervention winemaking but that’s even a difficult term,” says Ballou. “I think a lot of natural winemakers want to do little to no additions with the goal of truly capturing fruit. That’s the biggest thought behind it – capturing the fruit, capturing the site, capturing the vintage.

“It’s the idea that once you start adjusting things and manipulating, you’re losing that,” she says. “And you’re putting more of a ‘human footprint’ on it. I certainly don’t think there’s anything wrong with that – it’s just a different style.”

Ballou sourced her 2018 grapes from Robert Clay Vineyards. Owners Dan and Jeanie McLaughlin decided to move into the natural wine scene both in the vineyard and the cellar after two years of investigating the idea. They plan to gradually transition their 20-acre vineyard to organic farming.

“My number one goal is to be 100 percent organic for the entire vineyard,” says Dan McLaughlin.

So far, two blocks – or roughly one and a half acres – have been converted. In these two blocks, McLaughlin uses peppermint, clove, and garlic oils, which act as a pesticide. And he sprays a natural clay that acts as a fungicide and insecticide, while protecting the vines from sunburn. He uses a special hoe instead of spraying herbicides. He also sprays compost teas that assist with fertilization and plant health.

McLaughlin’s sandy soil loses water quickly when it’s hot, especially when the wind picks up. Because evaporation happens fast, he keeps a close eye on the vines and monitors the canopy’s temperature as well as the soil’s absorption to be sure the vines have enough water.

This attention to the vineyard makes his grapes desirable to winemakers. Some of his fruit goes to Southold Farm + Cellars as well as to Lightsome Wines, among other quality producers. He enjoys talking about his work and he has a contagious energy.

Now, however, the McLaughlins occupy space that they bought last year just off the square in Mason.

“I felt like I needed to see the difference – the impact in the wine and on the palate compared to conventionally made wine, so I started experimenting,” he says.

To be considered organic and bear the U.S. Department of Agriculture’s organic seal, which is his goal, a vineyard should go a minimum of three years without using artificial chemical fertilizers, pesticides, fungicides, and herbicides. McLaughlin is well on his way, doing minimal intervention in the vineyard.

“This year I almost didn’t spray anything even on my other blocks. I did as very little as I could – as minimal as I could get away with,” he says.

In the meantime, Regan says, “I’d much rather start learning about natural wine cellar practices beforehand, so I’m comfortable with it when the day comes that the vineyard meets the requirements for natural wines.”

Many of these practices diverge from institutional teachings about making wine.

Ballou, who earned her viticulture and enology degree from the University of California at Davis, a leading institution in the industry, says, “I’ve always leaned in that direction. It definitely started when I was at Davis. There was a big group very interested in natural wine – particularly graduate students. They did a lot of tastings and would bring out all these really cool bottles. We became really good friends and through their influence, I became really interested in that style and philosophy of winemaking. Ever since then, that’s something I have pursued in my own winemaking.

“What I always tell people when they get on these heated topics of natural wine is ‘If you’re a fan of Old World wines, like Bordeaux and Burgundy, most of those wines would fall under the loose definition of natural wine,” she says. “It’s not a crazy thing. It’s not a hip, new concept – although it has become very hip – but it’s nothing new. It’s just taking down winemaking to a simplified form.”

That simplicity is conveyed in the name – Lightsome Wines, which is fitting for both Ballou’s ideology and her winsome style.

Part of the reason we’re able to sell natural wine and promote them is that the consumer is much better-educated now than even five years ago.

“I’ve always wanted to make very approachable table wines – I don’t think wine should always be taken so seriously. It should be something that’s around to help facilitate great conversations and times,” Ballou says.

At La Bergerie, Washburne has showcased wines from both Lightsome Wines and Southold Farm + Cellars. He enjoys getting these kinds of wines into people’s glass.

He adds, “Part of the reason we’re able to sell natural wine and promote them is that the consumer is much better-educated now than even five years ago. And Texans are more adventurous than people will give them credit for. The real credit goes to the people who are actually buying the wines – the end user. None of us could be doing this if people weren’t willing to try the wines and spend their money.”