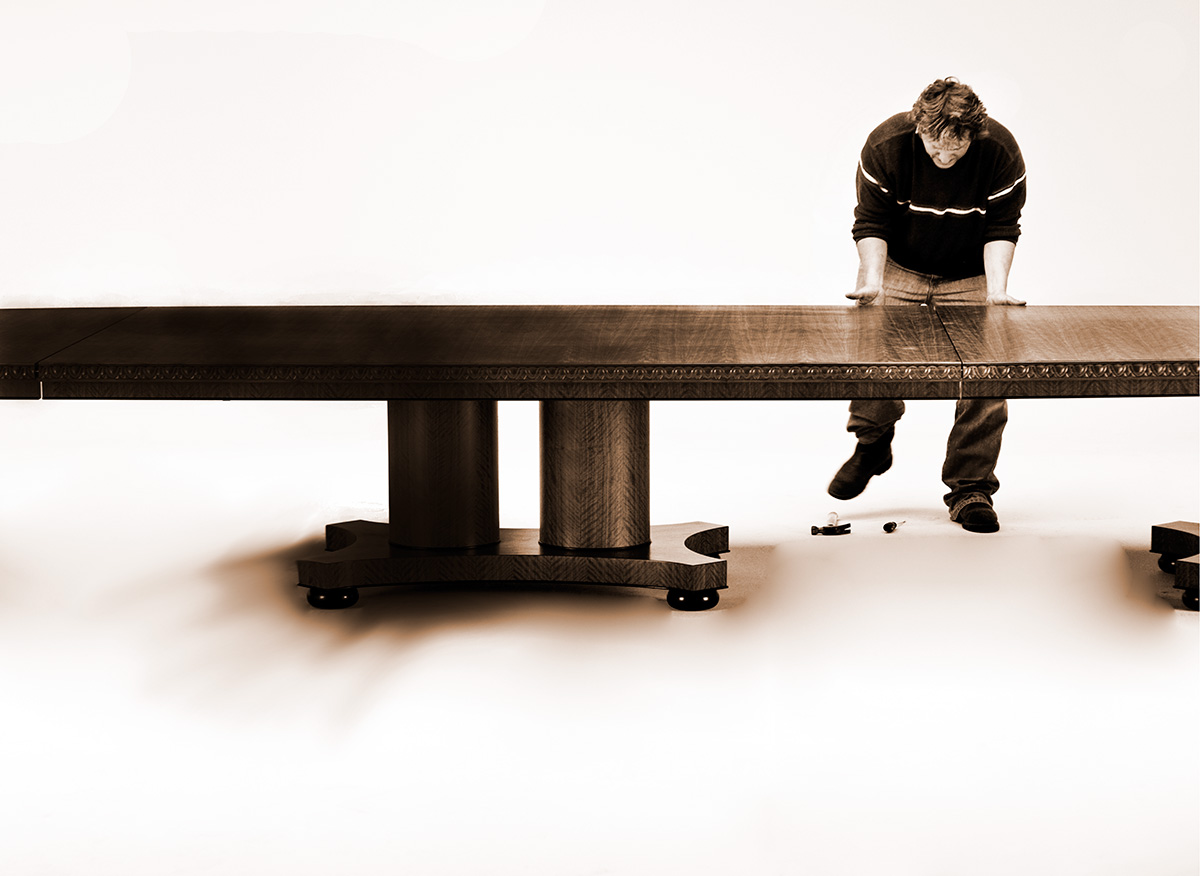 Based among the beloved towering Cypress trees of Wimberley, Sell Design Group designs and builds custom furniture and architectural elements commissioned by designers, individuals and architects. Co-owned by the husband-and-wife team of Phillip and Tracie Sell and in operation since 1994, Sell Design Group has enjoyed its current location in Wimberley for nine years and works with people from all around Texas on creating specific designs that satisfy unique tastes and needs. Specializing in American hardwoods – walnut, oak, mesquite and especially the local cypress (more on that later), the Sells design and build anything from tables and chairs to beds, with most woods sourced within close range of the Hill Country region.

It all started with a roll top desk that Phillip Sell made in high school in Kansas City. A career in furniture making followed, until a soft landing in the rolling hills of Wimberley made him put down roots. At the beginning, Tracie, a Houston native and Wimberley resident, was commuting to Austin, while Phillip made his custom pieces, a set-up that made less and less sense as the drive to Austin grew longer and longer. So, since 1997, the pair has focused solely on growing the business, creating uniquely beautiful pieces for a growing population of locals, as well as clients from Austin and beyond.

Many of the company’s recent pieces are made of local cypress, the unexpected benefaction of the tragic 2015 Wimberley flood. As the waters receded, FEMA workers gathered hundreds of felled cypress trees that had accumulated in a bend in the river and began chipping them for disposal. The Sells made a bid to purchase 300 trees from Texas State University, which owned the land where the trees accumulated. They beat out several other offers and were awarded the trees based on the fact that they were the only locals to submit a bid. The cypress trees now provide ample inventory of beautiful material for work.

The resulting custom creations can meet the expectations of contemporary and traditional tastes, as well as the decidedly unusual. Tracie recalls a customer bringing the team a crocodile hide and asking it to be incorporated into a piece of an unspecified function. Phillip and his team of artisans created a base and support for a glass shield shaped top. Phillip created a mahogany wooden belly, drawers, and neck, and added a bronze head to bring the creature back to life as a coffee table. But mostly the work calls for exquisite custom pieces and architectural elements such as structural trusses that showcase Phillip’s artistry and craft as well as the beauty of the materials. While all pieces to date have been custom made, the company created its signature Cicada Line, which features interwoven wood pieces that can be applied to any commissioned design, if desired. Phillip’s work has earned multiple awards from the Texas Furniture Makers show in Kerrville, including “Best of Show,” while two of the company’s apprentices have won the “Best Apprentice” award.

Sell Design Group plans to use some of those cypress trees to create a new line of tables in 2019, which will provide a lower price point to complement its custom-made pieces. Clients will be able to choose several options of table tops as well as multiple leg options that provide either a traditional farmhouse look or a more modern sensibility. Buying a piece off the floor will also be available, making the line more accessible to a wider clientele in the Hill Country and beyond.