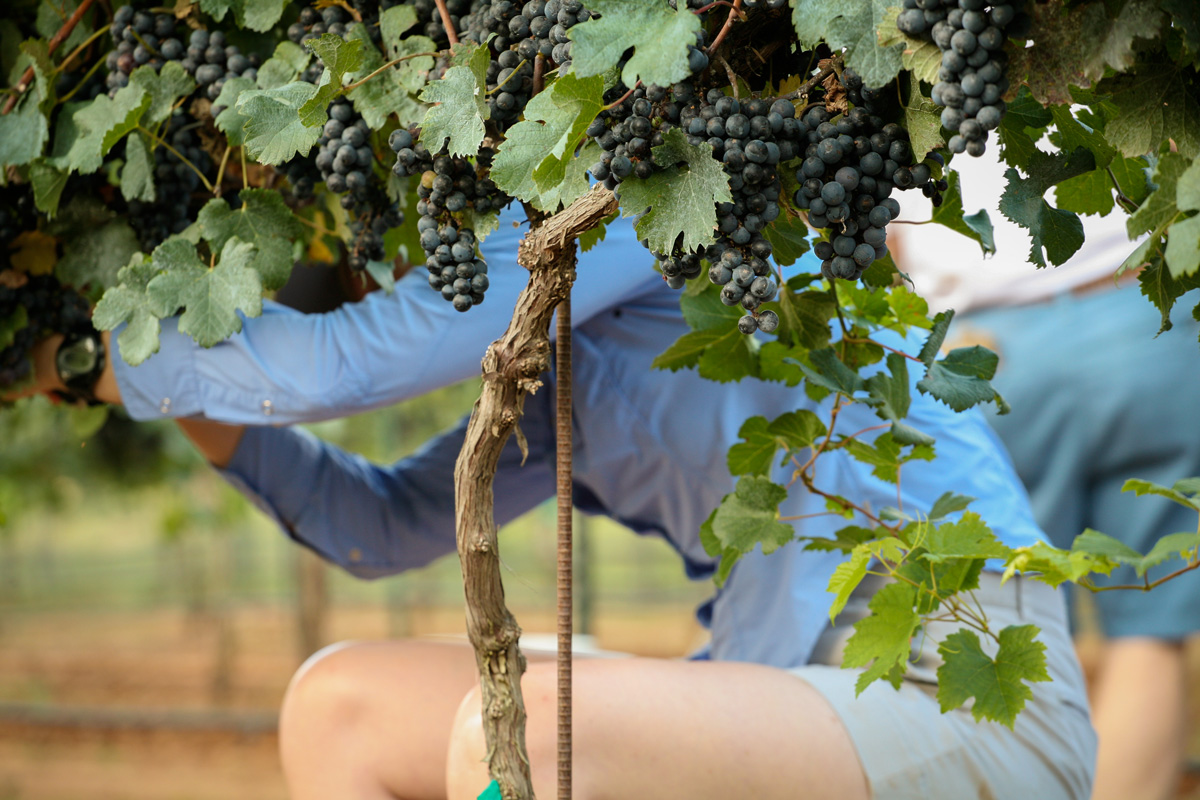 While extreme weather devastated grape crops across the nation and world, Texas grape growers were spared and experienced perfect weather in 2017.

“The High Plains had exceptional quality fruit this past year,” says Dabs Hollimon, a self-described “winemaker in training” who with her husband, John, owns 1851 Vineyards in Fredericksburg. “They probably had the best harvest year, as far as quality, that they’ve ever had. We (Texas wineries) are going to have some exceptional wines come out because of that.”

“The weather was not mild on the High Plains last year, but spring was about a month early, as it was in the Hill Country,” says Nolan Newsom, owner of Nolan Vineyards’ winetasting room in Comfort.
Much of the state’s grape crop was picked just before the storm arrived.

“Last year was a fantastic weather year on the High Plains, where our vineyards are located,” says Newsom. “With many new acres of grapes planted there in the past few years coming online and with many new growers, the quantity and quality of Texas wine grape production has increased exponentially. For the High Plains, it was the biggest harvest by far.”

Newsom Vineyards, where three generations have grown grapes for more than 30 years, now cultivates 150 acres of producing vines. In 2017, each acre’s production averaged a record three-tons of fruit, he says. Newsom’s vineyards provide fruit to 15 other wineries as well.

This wasn’t so for all viticultors. Hurricanes also wreaked havoc in Florida and Puerto Rico, winds drove fierce wildfires up and down California and freezing winter cold repeatedly afflicted the Midwest and Northeast. Grape-growing regions elsewhere in the world also had a tough year.

The International Organization of Vine and Wine, a Paris-based scientific and technical group, concluded production of 2017 vintage wines would dip three million bottles globally due to weather events such as severe spring frosts in France, Italy and Spain.

Timing is Everything
The timing of the hot weather and occasional freezes and rainstorms was serendipitous.

No late spring freezes occurred, as they have in years previous, damaging young grapes, according to wine makers. No excessive rain fell before the summer harvest, which occurred about two weeks earlier than normal in the High Plains and about a month earlier in the Hill Country — ahead of Hurricane Harvey, which dropped no precipitation on the High Plains and produced about an inch or less of rain in different parts of the Hill Country.

“It was an excellent harvest,” says Dick Holmberg, Singing Water co-owner (with his wife, Julie). “We had either a record harvest or normal harvest for every grape we grow.”

Adds Mark Whittemore, the Holmbergs’ operations manager, “For pinot grigio, we actually doubled production from last year. We average about 250 gallons of fruit and last year we had 438 gallons from 11 rows of vines (a little more than acre of pinot grigio grapes). The rains came in early, which allowed moisture to get in (the ground) and the vines to really grow — and they did quite well. The canopies were good, and grapes came in real nice.”

“In the past, if we didn’t grow them here, we bought extra grapes to meet production requirements and customer demand. Last year, we bought less because our own estate vineyard was more productive,” Holmberg says.

The result: bottles of Singing Water’s 2017 pinot grigio were available to tasting room visitors starting this past February. So will many other 2017 vintage white varietals made by other Hill Country winemakers.

Depending on the winery and the varietal, 2017 red wines largely will be released between late 2018 and sometime in 2020.

Notes David Prejza, Sister Creek Vineyards tasting room manager in Sisterdale, “Danny Hernandez, our winemaker and winery manager, has said these are really good grapes. He’s excited by wines we’ll make this year. He’s excited about last year’s, too, but really more this year. Seems like everyone upped their game and the weather pattern has made this a really spectacular year.”

Another result may be more visitors travelling to Hill Country tasting rooms — especially if the 2017 wildfires discourage tourists from visiting California cellars.

“It’s amazing how many people we have coming into the tasting room who said, ‘We had planned a trip to Napa, but we decided to come here instead,’” Dabs Hollimon says. “It’s very exciting, from a visitor’s point of view, to know that when you come to the Hill Country, you’re offered not only beautiful views and wonderful hospitality, but also, as a region, high-quality Texas wines.”

Like Singing Water, 1851 Vineyards will have 2017 vintage white wines available for tasting this year — and Dabs Hollimon expects to have more bottles available for sale because of the larger harvest last year.
“Definitely,” she says. “We have an abundance of quality fruit, so it’s hard to resist making more wine.”

John Hollimon, 1851’s co-owner/operator/viticulturist noted they had 10 acres in production locally last year, plan to add five more this year and five more in 2019. This will ensure 1851’s continued commitment to producing 100 percent Texas wine. This year, it sourced 40 percent of its grapes in Fredericksburg, 60 percent from the High Plains.

More Elbow Room
Already, the Hill Country is getting visitors who prefer the less-crowded tasting rooms, compared to those in California, Prejza is finding.

“I’ve had people come in and say, ‘This is the way Napa or Sonoma used to be back in the ’70s,’” he says.
Occasionally, local tasting rooms can be crowded on weekends, but Prejza notes it shows how much Texas is attracting wine-loving visitors.

“I started here 13 years ago, and it was fairly common back then to hear ‘Oh, I didn’t know there were wineries in Texas.’ It’s pretty rare to hear that now,” he said.

Prejza predicts Sister Creek and other local wineries will see more tourists throughout 2018 than they’ve ever seen during any other year. Holmberg says he’s already “seeing more new faces, either first time wine-tasters or first time doing it in Texas” at Singing Water.

Dabs Holliman finds it hard to believe that the Texas grape harvest was so blessed.

“This absolutely could be a turning point year for Texas wine, so we’re looking forward to it,” she said. “It’s exciting to think about the possibilities, to think about what 2018 might hold.”