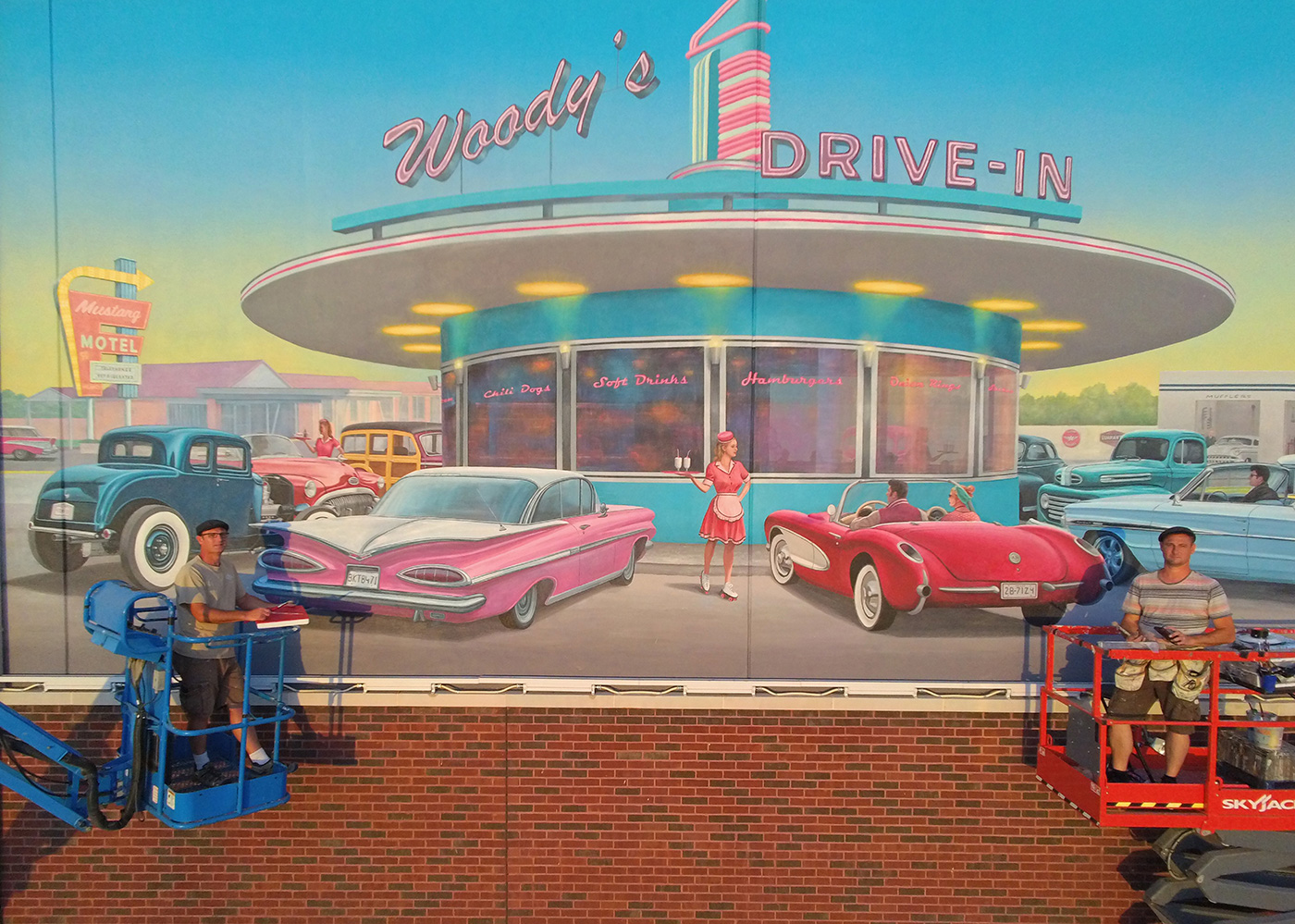 The commissioned art and expansive murals of Hill Country native Lee Casbeer and his brother, Matt, grace interior walls and building facades throughout Texas and well beyond — from Dubai to Italy.

Lee keeps a public gallery and studio at 104 N. Nugent Ave. in Johnson City. Matt works out of a private studio on his property in Fredericksburg. The brothers, who grew up in Llano, frequently collaborate on large-scale murals and large-scale art. They are currently working a few days a week on a massive mural 17 feet high and 200 feet long for a car museum near Abilene and hope to finish it by the end of the year.

“Our grandmother was an artist and her house in Llano was full of easels and paint and canvasses,” Lee Casbeer said. “I started drawing and painting when I was about four. My brother and I stuck with painting. My sister is a massage therapist in Fredericksburg.”

He returned to Texas in 1999 with an Italian wife, Alessandra, and opened his gallery in Johnson City. The pair live above the gallery with their four cats: Bogart, Picasso, Sofia and Tigre.
The cats are frequently underfoot between the canvas and the artist, or lounging languidly on countertops, switching their tails with displeasure when the attention turns to painting and not petting. They vie — in their most nonchalant prima donna way — for Casbeer’s complete attention. Visitors are greeted warmly but beware, Bogart bites if he’s not at the center of all things.

Lee spent his first two years of high school in Llano and finished in Fredericksburg in 1989. He then apprenticed for two years with well-known Fredericksburg artist John McClusky, learning to work with acrylics. Afterward, he moved to Italy to study oil painting.

“The cats…yes, the cats are always around,” he said absentmindedly, petting Bogart with both hands.

The Casbeers’ carefully researched and meticulously detailed murals can be seen by the public at Java Ranch Coffee Shop, Parts Unknown clothing store and Altdorf Restaurant and Biergarten in Fredericksburg, in the Pecan Street Brewery courtyard and at the public library in Johnson City and at Mamacita’s restaurants in Kerrville, Fredericksburg and San Antonio.

Stylistically, the Casbeers’ work covers the gauntlet, from fiery Spanish flamenco dancers facing off to Victorian couples twirling and swirling across a ballroom floor, from German beer makers raising a glass in an old-time saloon to classic Western scenes featuring untamed landscapes.

Lee’s favorite murals are “historical scenes of people that tell a story of some kind.” One he takes particular pride in is a mural of the peace treaty signed between the German settlers and the Penateka Comanche tribe in 1847 outside Fredericksburg — the only such treaty signed in America that was never broken. He even found a diary that detailed who sat around the campfire that day and what each participant was wearing to inform his mural, which hangs at the now closed Treaty House Cocktail Lounge.

One person in the mural is a white boy with long braids dressed in Comanche garb. According to Lee, the youngster was a captive of the Comanche whom the Germans attempted to get released to them but apparently he wasn’t interested in returning to Anglo society.

“We work out a rough sketch of what the client wants,” he explained. “Once we’ve narrowed down the scene, I need to find models to pose for me or reference materials that show what kind of dress people would be wearing. I draw it out in pencil on a small scale and then project it to make it into a large scale drawing.”

He has lost count of how many murals they’ve done. “We’ve never had to restore any of our own work yet. I’m hoping our pieces will be here the better part of our lifespan. Most of the ones I’ve restored are from the late 1800s to early 1900s.”

Casbeer’s interests are wide and varied, which is reflected in his private, non-commissioned art hanging in his gallery. His artwork ranges from detailed paintings of Texas longhorns and Western scenes to an anatomical collection of figurative paintings.

“Some people come in to my gallery and think it’s four or five artists represented here but it’s just me,” he laughed. “It keeps it fun for me.”

“I do all kinds of commissioned pieces of any subject matter as well as portraits,’ he said. “And I welcome anyone to come visit my gallery. We also have a nice community of artists here in Johnson City who get together for a life drawing class once a month. We hire a model to pose for us and it gives us all a chance to work from life, sketch from life, paint from a live person. It’s a good excuse for people to get together, drink wine and do art.”