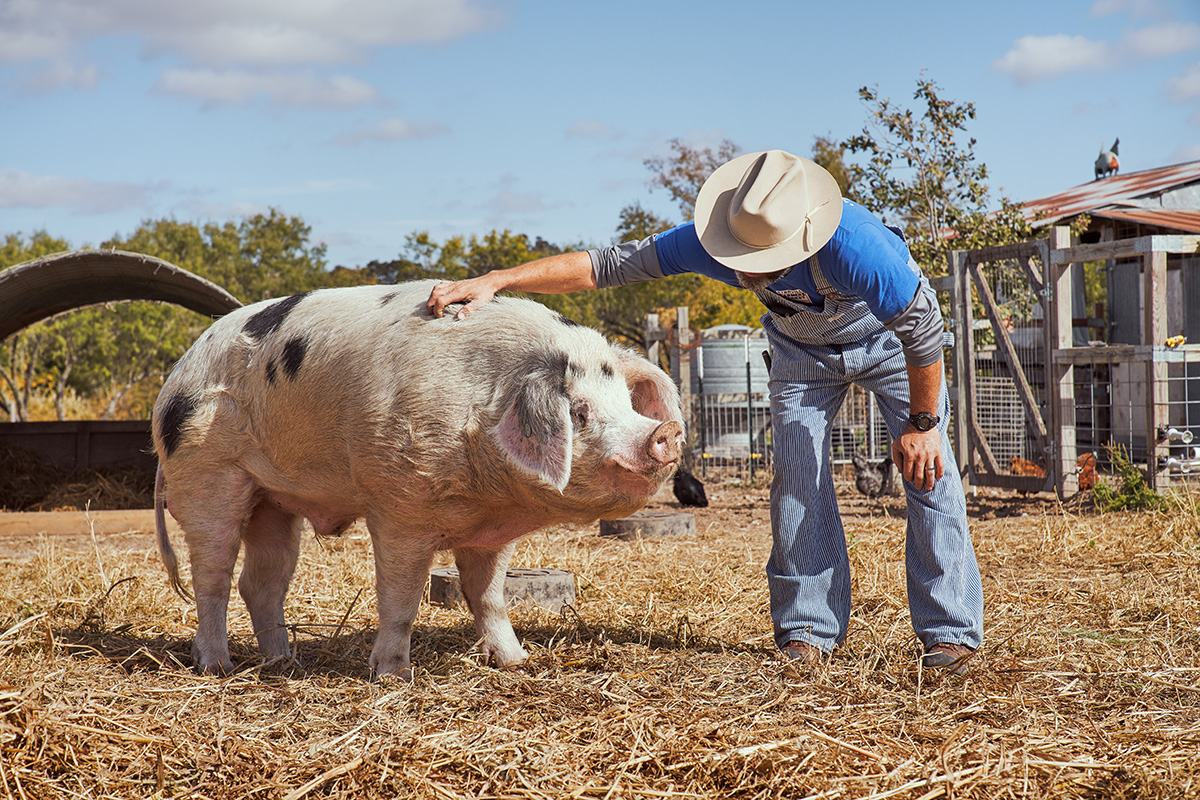 Bringing Back Heritage, One Swine at a Time

One should avoid buying a “pig in a poke.”

The term, dating at least back to the year 1555, references when someone tries to sell a bag (poke) with an edible “pig” inside – and the bag really contains a cat. (And yes, this relates to another term, “letting the cat out of the bag.”)

Justin and Kayte Graham of Zanzenberg Farm are more than happy to let you see what they’re selling – meats from pigs that date back to early generations on American farms.

Much like heirloom vegetables, Red Wattles, Herefords and Gloucestershire Old Spots are among the traditional, “heritage” swine the Grahams breed and raise on their family-owned and operated farm in Center Point.

“Heritage-breed hogs are not something that you’re going to find in commercial pork operations,” Kayte said. “It’s going to be the smaller farmer, ‘Hobby farms’ are doing it. There’s quite a few doing the same thing we are, but for the most part, it’s pretty minimal.”

She estimated that just 1 percent of the entire hog population, both in Texas and throughout the U.S., is comprised of heritage breeds.

But there’s nothing catty about their pork’s quality. The meat they sell is “beyond organic.” Non-genetically modified (GMO) hogs are antibiotic and hormone free, graze in pastures and consume corn- and soy-free feed (and, occasionally, spent brewers mash from Pint & Plow Brewery in Kerrville).

Heritage-breed hogs are not something that you’re going to find in commercial pork operations. It’s going to be the smaller farmer, ‘Hobby farms’ are doing it.
– Kayte Graham

The Grahams say the animals benefit from vitamin D provided by sunshine as well as nutrition from consuming various plants growing in mineral-rich soil.

Before being butchered, they are “finished” with a diet of locally produced whey and cheese (from River Whey Creamery in Schertz).

The result? Meat that is more flavorful, loaded with vitamins and minerals and unlike pork commonly found elsewhere.

The Grahams now are looking to increase production “because we sell out so fast. We can’t keep enough pork in the freezer. It’s a great problem to have,” Kayte laughed.

Where to Find It
Because it’s a small operation, some searching is needed to find products from this family farm (the Grahams’ children Lincoln, 7, and Redford, 5, help out; Wallace, less than one year old, will someday join in).

Restaurants offering dishes that feature Zanzenberg meats include Bryans on 290 in Johnson City and Emma + Ollie in Fredericksburg, as well as the Pint & Plow.

Buyers also can make arrangements to order and pick up pork products while visiting Zanzenberg Farm, situated on three acres primarily used for breeding around their home.

Their pigs are raised on 16 acres less than a mile away. The Grahams also own a near-by, 35-acre pecan production orchard, where they hope to increase pork production, add breeders – and in 2020 commence a pork-centric experiment.

Pecan-Finished Ham?
In southern Spain, some farmers “finish” their pigs with a diet of oak acorns, Kayte said. The legendary jamon iberico de bellota (Iberian acorn-finished ham), also known as pata negra, is considered by many to be the finest pork in the world.

“We’d like to try it with pecans,” Kayte said, to see if the nut diet enhances pork flavor. So far, they only have tested their pigs’ appetite for Texas’ favorite tree nut.

“They just chomp them down. They’re really, really flavorful to them,” she said.

Why Zanzenberg?
The unincorporated community of Center Point, with a population of fewer than 5,000, hugs both sides of the Guadalupe River. When Charles de Ganahl opened town’s first post office in 1859, on the north side of the river, he named it Zanzenberg after his Austrian hometown.

When the post office relocated south of the Guadalupe, a new postmaster named it Center Point due to its near equidistance between Bandera, Comfort, Fredericksburg and Kerrville.

The Grahams were drawn to the Zanzenberg name in part because it harkens back to an earlier time when heritage pigs were more prevalent on farms and in kitchens.

“We want to bring back the older sensibility of community being tighter knit, gathering around the dinner table, every-one uniting around a good meal,” Justin said. “The name suited that. It’s a historic name that was sort of forgotten.”

Coming Soon: A Kitchen
With help from two grants, the Grahams plan to open a commercial-class kitchen in a building already standing next to their home. Already, equipment is being purchased and will be installed in time for a planned opening this coming summer.

The kitchen will allow the family to prepare pork products for sale, such as cured meats for charcuterie boards and plates; conduct demonstrations; and schedule food preparation classes for visitors and, perhaps someday, for nearby high school students in culinary and agriculture programs.
“If we build it, they will come,” Justin predicts.

Within a few years, the couple hopes to turn the farm into “more of an agritourism kind of operation,” Kayte said, with education playing a prominent role.

“Let’s offer a class on curing bacon. Let’s cure some bacon together and learn how to do that and learn the real connection between the original food and the end product,” she said.
‘Tied to the Earth’
Justin largely grew up in Uvalde County, “tied to the earth,” helping to farm land on his mother’s side of the family before “corporate ag” took over.

“More than most, I’ve seen what that looks like environmentally and what it looks like nutritionally,” he said. “We’ve done all these things to feed the world – that was the generational perspective.”

“However, in the process what we did was forfeit our own heritage,” Justin said. Looking around the Grahams’ farm, he said, “This is about bringing that back, restoring the core and being better stewards through and through – just good food, good health and clear thinking.

“It’s maybe what ails us as a nation and a community,” he added. “We miss our very necessary need to connect with the earth.”

Fine pork warrants the finest recipes. Here is a simple one suggested by Kayte Graham of Zanzenberg Farm that makes for tasty pork belly tacos and can top salads or a bed of rice and seasonal veggies.