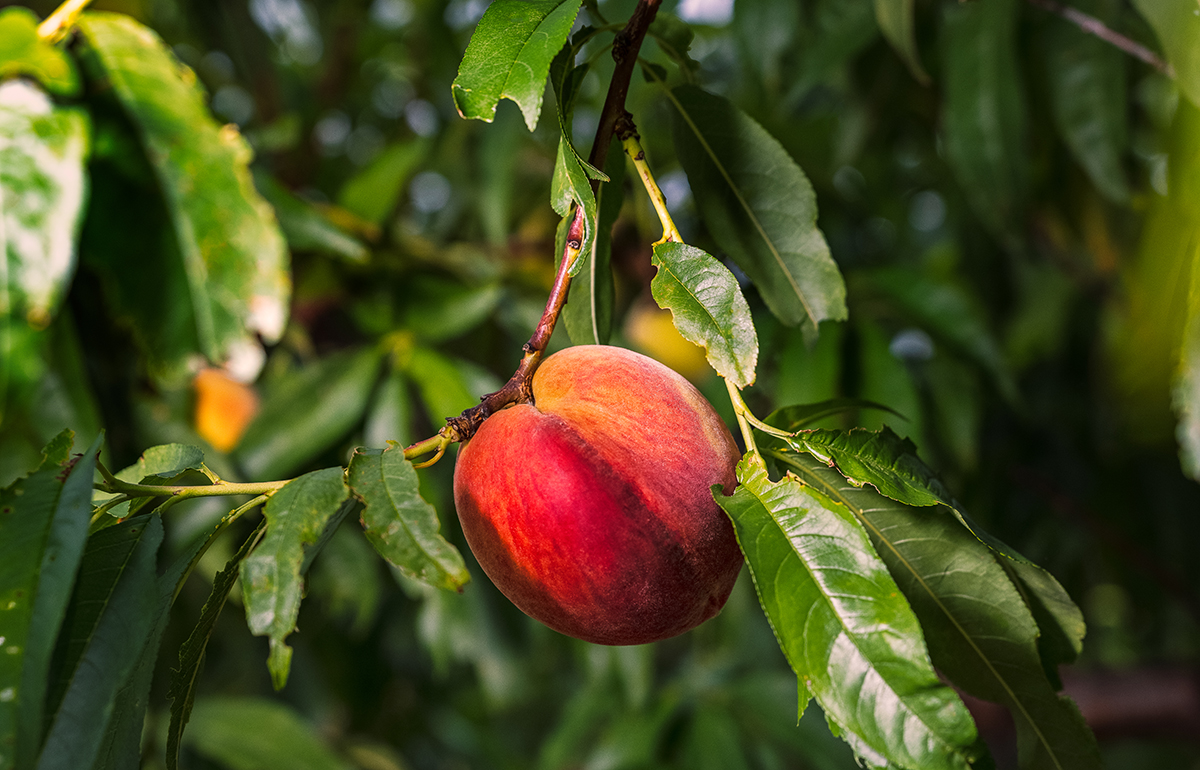 The Perfect Garden for Peaches.

Gillespie County peaches hold an enviable position in the fruit world. Their reputation for flavor is the envy of fruit growers everywhere. Customers from Florida to California recognize their brand. Peach fanatics swear by them.

How the Gillespie County peach became a standard of the industry, and a driver of agritourism in the Texas Hill Country, is a one-of-a-kind success story. It began as an act of desperation as much as anything else.

Before 1930, Hill Country farmers planted row crops and raised livestock. It was a good life but not always profitable. Making ends meet was often a struggle even in good years.

Gillespie County farmers, like farmers everywhere, clung to solvency by their fingernails, at the same time trying different crops to make a go of it.

“Peaches have been around the Hill Country for a long time,” says Donald Eckhardt of Donald Eckhardt Orchards in Fredericksburg. “A lot of German families had small fruit orchards. Not for selling but for baking and canning.

“We had a seven-acre peach orchard at our place on the Comfort Highway. In 1936, we started selling peaches out of a bob-tailed truck. We were looking for a way to pay the bills. Peaches did pretty well so my father expanded the orchard to 50 acres. You might say we woke up one morning in the peach business.”

“My father tried raising peanuts, but they didn’t make much. We had a small peach orchard in the 1940s, so we started selling peaches on the side of the road and at the Farmer’s Market in San Antonio,” Gold said.

Turns out Gillespie County and peaches were made for each other.

“We have warm sunny days and cool nights,” says Jimmy Duecker of Duecker Orchards in Stonewall. “Most years we have the right amount of cold weather and adequate rainfall. Our soil is sandy with a layer of red clay underneath. The clay holds the moisture and the nutrients. An agriculture professor in San Marcos once told me that Gillespie County was the perfect garden for peaches.”

The price of peaches rose in the 1940s drawing more growers got into the business. Each year the reputation of Gillespie County peaches grew.

“In 1946, a group called the Gillespie County Fruit Growers formed a cooperative to share expenses and market the excess peach crop,” Jimmy Duecker explains. “The co-op started with about 20 peach growers. Even Lyndon Johnson was once a member. He had a few trees on the LBJ Ranch.

The co-op built Burg’s Corner in Stonewall. It was a central place for members to bring their peaches for grading and selling.

“Burg’s Corner was built to be a tourist attraction, modeled after Clines Corners in New Mexico. Ernest and Hiram Hodges of Stonewall were instrumental in building it,” Duecker said. “The original building was an old army barrack hauled in from Borger in the Panhandle. Simon Burg owned it and rented it to the Gillespie County Fruit Growers.

Simon was the director of the co-op and A.J. Loth, a legendary local football coach, ran the peach shed. Through its vendors the co-op sold peaches all over Texas and helped Gillespie County peaches build a reputation.

“Then LBJ became president, and the whole area got a boost,” Duecker said. “Tourism picked up. A lot more traffic came rolling down the highway. Burg’s Corner sold a lot of peaches and LBJ souvenirs to people from all over the world.”

The Gillespie County peach business really took off in the 1960s. Gellermann Lane, just west of Stonewall, had one of the largest concentrations of peach orchards in the state.

From May through August, co-op members hauled truckloads of peaches to Burg’s Corner for grading and packaging. The co-op sold the peaches to tourists, vendors and stores, although selling wholesale to grocery stores was never a preferred part of the business.

“Grocery stores want peaches with some shelf life,” Duecker explains, “which means the peaches have to be picked a little early. When you do that, you sacrifice flavor, and that’s a big issue with growers. We’ve worked hard to build a reputation for quality, and we can’t afford to lose that. The bulk of our business has always been selling fresh peaches from the tree to the consumer.”

Duecker said so much of the business is timing. “We have a short time to sell peaches at their peak,” he said.

Interestingly enough the rapid growth of tourism in the Hill Country accelerated the decline of the peach co-op. With so many cars on the highway, peach growers could make more money as independents. The co-op was down to seven members when Duecker bought out their shares, Burg’s Corner included, in 1996.

“The trend now is smaller orchards,” Jimmy says. “We retail most of our peaches and sell the rest to vendors.”

Relationships between buyers and sellers are second only to quality when building a brand. At the peach shed, connections reach back several generations on both sides of the cash register.

“People still stop at Burg’s Corner who bought peaches from A.J. in the 1960s,” says Katelyn Duecker Eames of Duecker Orchards, a third-generation peach grower. “We have regular customers who drive up from Laredo. People from El Paso call ahead to check on the peach crop. They plan their summer vacation around peach season.”

“A lady from Florida is one of our regular customers,” says Luana Priess of Gold Orchards, another third-generation grower. “She knows my children. She watched them grow up at the peach shed.”

“We sell some peaches local, and some to travelers from out of state, but our typical customer drives in from Austin, San Antonio, Houston or Dallas.”

“Once they taste our peaches, they’ll be back,” Vogel said. “You can count on it.”