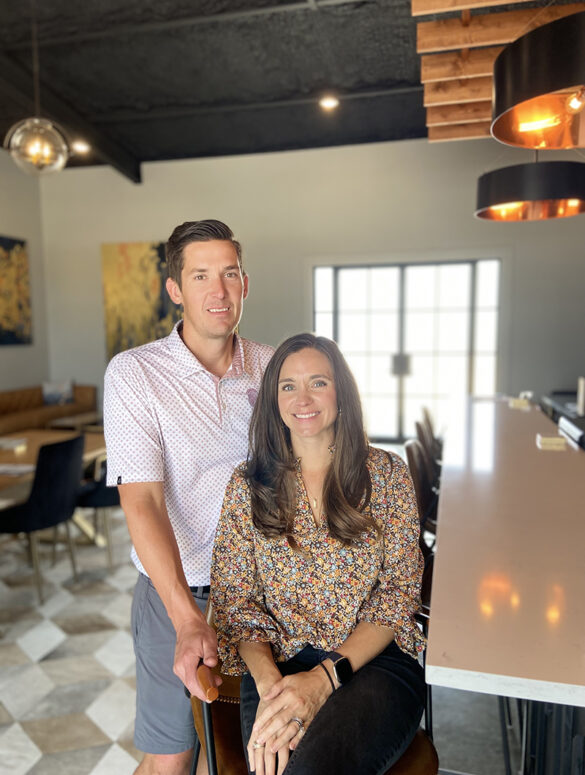 Hensleys take charge of storage, shipping, compliance so winemakers can do what they do best.

We know the Texas wine industry is still young, especially compared to California’s, which has been well-established for over 100 years. A $13-billion-dollar industry, Texas wine is still a relative baby, albeit a chubby one. With a few exceptions, vineyards are home to young vines, with some growers even ripping up acres of established plants to replace them with varieties slowly proving to be the best bet for hot summers and volatile springs. Winemakers are figuring out what the craft means in Texas, how the terroir varies from Hye to Stonewall, not to mention from the Davis Mountains to the High Plains. Slowly but surely, Texas wines are winning national awards, and this thirst for Lone Star wines has created an explosion of “eno-tourism,” especially in the Hill Country where there are over 100 wineries and tasting rooms.

This isn’t really about the winemakers, nor the tourism boom, but instead a nod to those helping the industry progress behind the scenes. Meet WineCub, the business of wife and husband duo Keri and Jason Hensley and Texas’s only wine storage, shipping, and compliance solutions provider. It’s a mouthful, but their amiable logo of a baby bear clutching a sparkling bottle of wine makes it all palatable.

WineCub has been in operation since 2018, but if you’ve never heard of them, that’s okay. Until they recently opened their public-facing tasting room, aptly called The Den, the operation was mostly invisible — unless, you happen to be one of the over 75 wineries that use their services. In that case, they’re likely a portent. WineCub says the storage bit is simple. When I visited, WineCub had 27,000 square feet of climate-controlled storage where wineries can simply store finished product. “If you have wine going from barrel to bottle, once it’s in the bottle, there’s nothing left to do with it, you need to put it somewhere. So we provide space,” said Jason, who oversees operations.

A bacchant storage unit that, in addition to wine, has been packed full of glass, barrels, and other supplies wineries order ahead in bulk to try and mitigate supply chain shortages. Jason said calls he’s received lately query, “Can we stick that in your warehouse for a while?’ I don’t have room for it, either. But I say, sure, we’ll figure it out.” The aisles between pallets of wine are filling up, and by the time this article is published, an additional 9,000 square feet of storage will be completed and likely already packed with wine. A gradual concrete ramp was just poured to connect the existing storage to the new storage, and Jason will spend a Saturday slowly forklifting pallets of wine to their new accommodations. Another 7,000 feet of storage are slated for the coming months, bringing the grand total of storage space to 43,000 square feet. Jason possesses a mental map of each unit’s contents, and each shelf’s stock — information that’s also recorded using software. By the square foot, building and cooling big storage spaces is significantly cheaper than constructing small ones, and the efficiency this storage hub has created no doubt trickles down to the small producers and wineries.

Storing wine at a cool 60 degrees is just one corner of the niche Jason and Keri have created. The two other major solutions WineCub provides its customers are shipping and compliance. For about 75 local wineries, the WineCub crew is the invisible muscle that packs and ships Texas wine directly to consumers. WineCub’s software connects directly to the point of sales systems of their winery clients, and when an online order comes through, WineCub picks, packs, and ships the wine.

Down a cement pathway is the packing room, actually a warehouse. The sound of forklifts and smacking of empty pallets echoes. The facility is about the size of a small H-E-B with tall ceilings and towering shelves framing three of the four walls stocked with all the varieties of wine its shipping clients are selling. The whole space has Supermarket Sweep meets Santa’s workshop energy, but more breakable.

In the center of the room, there is a miscellany of packing technology, including a formation of refurbished shopping carts, some filled with an assortment of wine that gives the impression of someone throwing an awesome dinner party. The seller told him, “We take the wheels off, pull the hair out, and spray paint them.” There is a tape machine — an automated tool with a conveyor belt, and a robot eye, which puts boxes together at impressive speeds. A large walk-in freezer holds ice bricks which get fitted into recyclable packaging for the journey from Hill Country hub to some connoisseur’s clinking glass.

The WineCub packing crew, including their tape robot, can pack as many as 550 boxes an hour when fulfilling a club shipment. These club packs are currently responsible for about 65-70% of WineCub’s total annual shipments, and like the industry itself, their workload is bookmarked by seasonal wine releases that mostly happen in the spring, fall, and holiday time. Last year, WineCub sent out 94,000 individual packages averaging 4.2 bottles of wine each. That’s almost 400,000 bottles of Texas wine shipped directly from Winecub to home consumer. This year, they’re set to send around 130,000 individual shipments. This volume creates economies of scale, and WineCub clients are able to benefit from their secure carrier discounts with the good folks at UPS and Fedex, both of whom are integral pieces to the puzzle.

Through its shipping services, WineCub acts as an extension of the wineries themselves, and for small and large producers alike, outsourcing this lift to Jason and Keri is smart business.  “Wineries don’t ever have to stop what they’re doing in the tasting room or on the winery premise to go pack a box. We do it here…that’s our bread and butter for sure. That is why we’re here. And we’ve tried to plug that pain point for so many people.” The Hensleys wouldn’t divulge the names of any of the wineries they work with; they are NDA’d by some, and have an unofficial-official (and classy) policy of keeping their clients’ info private, letting the wineries disclose the partnership if they choose. Despite the industry’s reputation of being a friendly, cooperative bunch, “There’s still a little bit of competition out there,” Jason said. “They don’t always want to share their information on volumes.”

Keri chimes in, “If someone’s coming out with something new and exciting that no one else is doing, you know, it may land here, and we might be the only ones to know other than them.” I asked William Chris Vineyards (WCV) whether they used WineCub’s services. Perhaps unsurprisingly, they were one of their first customers in 2018. In addition to using their storage services, WCV use their packing services. Prior to this partnership, they did their packing internally, but are happy to have found “a partner that has as much care and respect for your product and the customer experience as you do,” CEO and Co-Founder of William Chris Wine Company Chris Brundrett said of the Hensleys. “Club packs are a responsibility heavily laden with exhausting attention to detail. Precision is key. During the peak of the pandemic, WineCub shipped 25,000 packages for our company which would have been nearly impossible for us to do internally, especially at the speed and level of accuracy that they did.”

“It has freed up our key personnel to do what they do best — share a piece of our world with our guests and members. Our team gets to be in the tasting room interacting with our fans rather than dealing with the cumbersome details of interstate packing and shipping. Watching Jason and Keri build efficiencies in their business has been impressive, that’s their focus, and it pays off for clients like us.”

The Hensleys moved to the Hill Country in 2018 after years of planning their escape from the corporate ladders they were climbing in Houston. They wanted to work for themselves, but together. The couple had an interest in wine, both mentioning a lightbulb bottle they had at their engagement, and the burgeoning industry and small-town life of Fredericksburg attracted them. They briefly considered opening their own winery, but friends of theirs in the industry steered them in the direction of services. For three years they did their homework, including an important trip to Walla Walla where they visited and observed an operation like the one they hoped to build. “It was husband and wife, family-owned, very similar to us,” Keri said. “But you just don’t know until you do it.” Eventually, they took the plunge, “If our third child arrived healthily, we said we were going to quit our jobs,” Jason tells me. Healthy baby indeed, and suddenly “we had to, like, figure it out.”

Keri, who grew up near San Angelo in a ranching and farming family, worked at the Houston Livestock Show and Rodeo, where she was the Managing Director of Auctions. On the hot Monday morning when I met her, she seemed painlessly put together, with casually waved hair that seemed God-given. Keri also told me that she is extremely proficient at Excel. “People are scared of spreadsheets!” she laughs, “and I heart Excel.”

All this data visualization comes in handy when considering yet another service WineCub offers its clients: compliance. Not only does WineCub themselves hold out-of-state shipping permits for 38 states, but they’ll also help individual wineries obtain, and maintain, additional permits when needed.  “It was becoming increasingly challenging and difficult to navigate all of the different state by state requirements,” Brundrett told me, “The compliance piece is huge — it really takes a lot of burden off of our key personnel.” The WineCub team can even take care of monthly TABC and TTB (Alcohol and Tobacco Tax and Trade Bureau) reporting.

In April, WineCub rolled the stone away and opened The Den, a tasting room built in what was its first-ever storage warehouse but is now furnished in royal blue and bits of brass. The Den and WineCub are near Stonewall, north of the Pedernales River near the LBJ ranch. The warehouses pronounce themselves amid the surrounding hayfields. If you’re looking for a true insider’s view of what it takes to grow the Texas wine industry, stop by. The Den’s tasting menu features WineCub’s own red blend (yes, they also make some wine), as well as a rotating list of vintages from small-batch producers.

Caroline Bradley, The Den’s tasting manager, commented on the visitors they’ve seen since opening. “The people who are coming out are like third- or fourth-time visitors to this area,” she said. “Maybe they come out and they just want to chill. And they want to experience something different. We’re that. We’re never going to be competing with the vineyards.”

And why would they want to compete? Winecub’s primary aim is to support those vineyards, those wineries, and give the industry the launch pad it needs to bud out beyond state lines. The twinkly-eyed vinter, the sparkling rosé, the newest tasting room on the 290-corridor — those are the stories that easily bewitch the wine-curious. But 43,000 square feet of Texas wine? That’s something to behold, too.