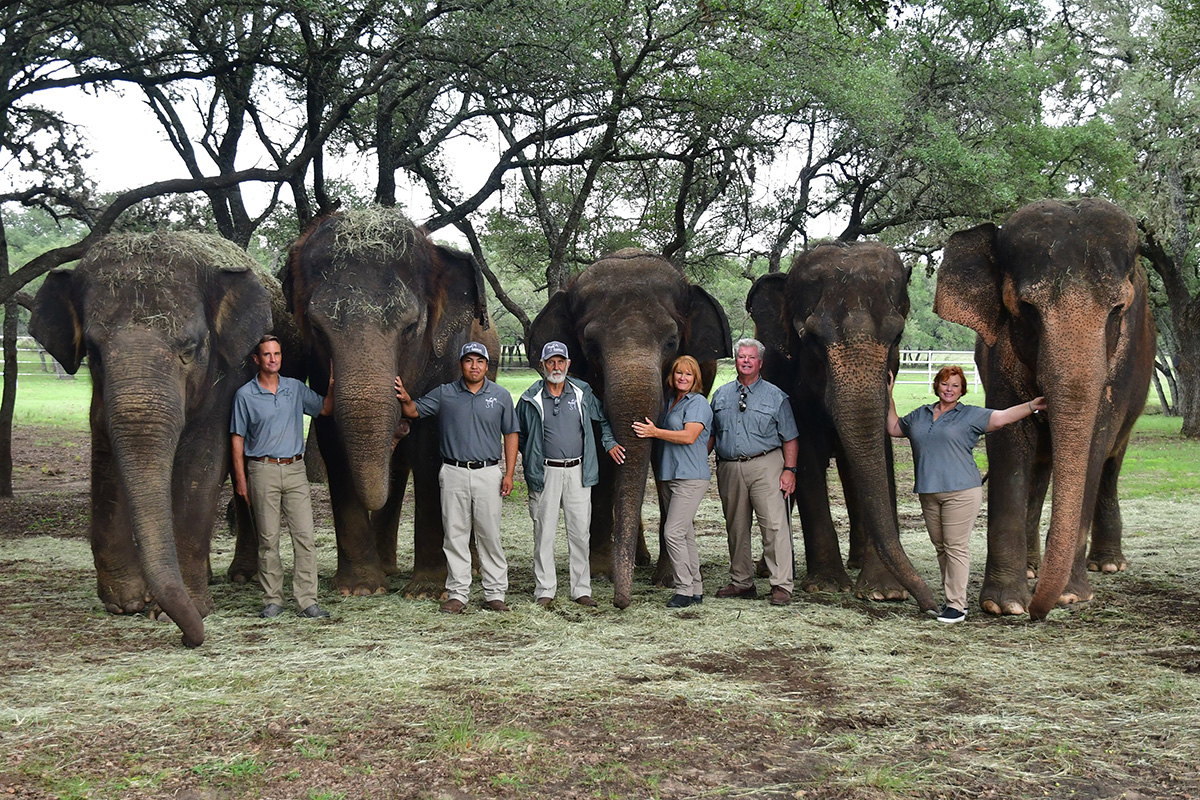 Pachyderms get new home near hills of Stonewall

For 45 years Kari and Gary Johnson have surrounded themselves with the wisdom of the ages in the form of ele-phants. The Johnson’s entire lives have been devoted to the care of pachyderms.

“I was exposed to them around my step-father who was a trainer when I was younger. They were just always around,” Kari said. “When you have had that intimate experience with them, I don’t see how you can’t love them. Even when you meet them for the first time, you just fall in love.”

The Johnson’s recently moved themselves, their five elephants — Becky, Rosie, Kitty, Tai and Dixie — and trainers to the Hill Country, to start an endangered animal preserve, called The Preserve.

Experience the elephants
The main goal of The Preserve is to build the bridge be-tween elephants and humans.

There are currently fewer than 35,000 Asian elephants left in the world and just under 450,000 African elephants.

“These are an endangered species and we believe that the contact that our friends, neighbors and visitors have will help create more ambassadors for these creatures,” Kari says. “They really can touch your heart.”

“We believe that unless you have contact with something, why would you even care about it?” Gary adds.

At The Preserve, guests have the opportunity to interact and learn about the history of the elephants, what they eat, what they do each day and have the chance to bathe them and give them a pedicure.

Everyday care
Gary compares them to children, in that the elephants re-quire constant care.

“We start their exercise and walk and then each one is given a bath. And after that, we take each one and do special training for mental and physical stimulation,”
Gary says.

Endless opportunities
Owning and training elephants has provided unique opportunities for the Johnsons and their trainers.
Many of their elephants have been in movies, traveling by plane, train and automobile.

They have also participated in research efforts with breeding, conservation and disease prevention and treatment.

One elephant, Tai, has an orthotic on her foot because one leg is shorter than the other, giving her a better quality of life, and thus helping others like her.

Joanne Smith and Dave Smith have been working with the Johnsons for over 20 years.

“When I was one, I had a stuffed elephant and I always knew I wanted to work with them someday,” Joanne says. “I got connected to the Johnsons and just continued to fall in love.”

“Experiences I had during my exotic animal training guided me to Gary and Kari, and they impressed me with how deeply they care and what they are doing is top-notch,” Dave says. “Their first and last concern are these elephants.”

“Their (animal rights extremists) business is to focus on the negative stories, many of which are years old,” Joanne says. “But what people need to understand is that the video footage is highly edited and the stories aren’t true. The best way to understand what we do is for people to come here and see for themselves and learn about these animals.”

“At the end of the day, these animals are being managed by humans in some way because the numbers are dwindling. And if we want to save them, humans have to interact with them,” Gary says.

Beyond elephants
In addition to the elephants, which range in age from 24-42 years, The Preserve hopes to bring more animals to the Hill Country.

Plans include adding a giraffe, a kangaroo, a bird aviary and more.

“We want to not only preserve these endangered species, but also preserve the animal-human bond,” Kari says. “We want people to be able to feed, touch and learn about animals they normally wouldn’t have the chance to interact with.”

The Preserve sits on 50 acres outside of Stonewall.

“That is the beauty of what we do; we make sure these elephants get the care and exercise that they need,” Kari says. “We are going to give them the care that they deserve.”

They also are starting a nonprofit to help care for future elephants, under the name Hill Country Elephant Preserve.

“These elephants are going to outlive us and we want to make sure they are always taken care of,” Kari says.