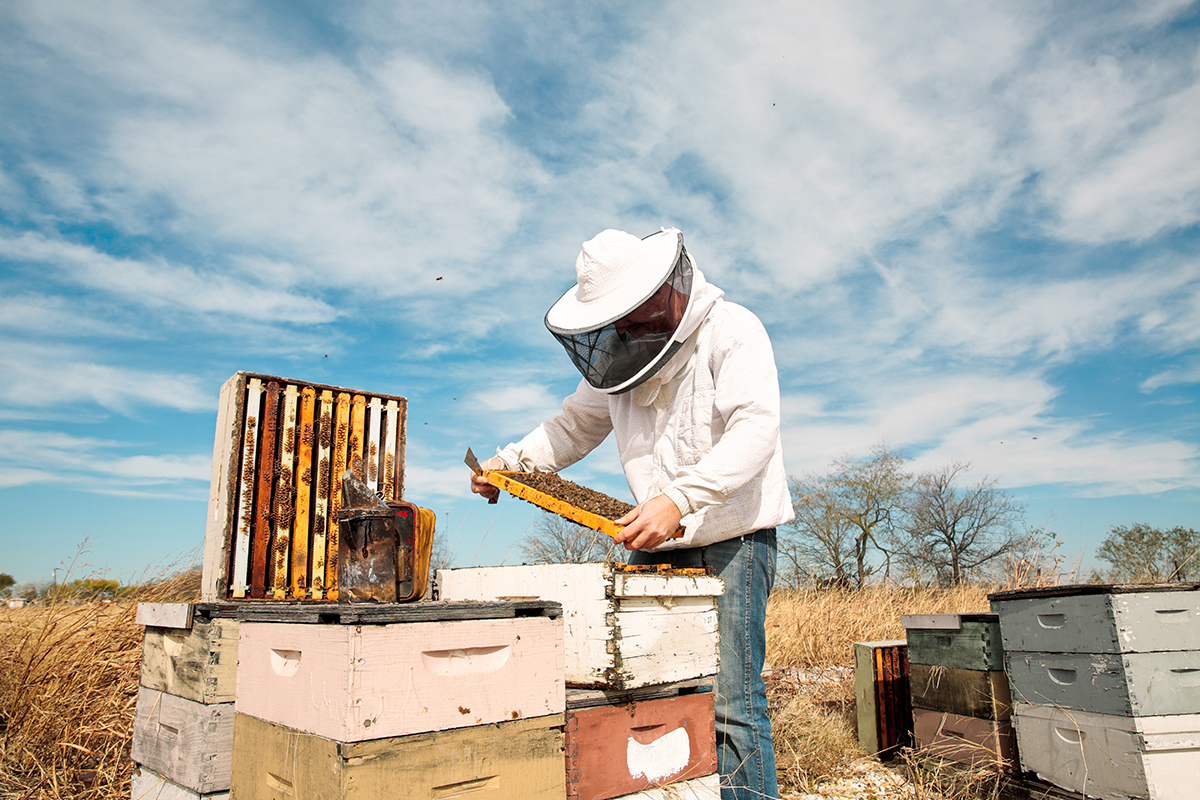 From bee to bottle

With a highly energized farm-to-table movement and a multi-million dollar wine industry in Texas, third generation beekeeper Clint Walker III expanded his grandfather’s honey business from a strictly honey retail operation to selling a variety of honey products. The next iteration of the Walker Honey Farm includes honey wine and mead.

Producing spirits, however, was not something Walker anticipated.

That’s what we’ve been for 88 years. My grandfather, my dad, me – my son (Jonathan) is turning 30 in two weeks and he’s in the business, and he’s the head beekeeper. He calls himself the overlord of beekeeping operations. It’s fair to say we’re a four generation operation.
– Clint Walker

“The genesis of it, I would say, happened over coffee one morning with my wife. She said, ‘Are you sure we want to always keep the same business model that grandpa and your dad had? Do we want to expand? Do we want to do more honey bottling, more honey products?’” he says.

Clint and Janice Walker were able to pursue this dream of an array of honey products after a bumper crop in 1995.

“It was the largest crop we’d made in 75 years of the company,” Clint Walker says. “Five years later we bought a small region-al honey packer. In 2001 we started building our bottling plant and started selling honey to H-E-B and other stores. As we grew that business, we started making other products. Everything we do is bee-hive to bottle. We don’t surrender our honey out to a packer like my dad use to.”

“That’s what we’ve been for 88 years. My grandfather, my dad, me – my son (Jonathan) is turning 30 in two weeks and he’s in the business, and he’s the head beekeeper. He calls himself the overlord of beekeeping operations,” said owner and third generation beekeeper, Clint Walker. “It’s fair to say we’re a four generation operation.”

“We were astounded. People just kept asking us for more and more products,” Walker says. “The bottom line is; we listened to our customers.”

“Bee to bottle became our tagline. We meant everything from the beehive to the finished product,” Walker says. “We said, ‘Well, there’s another way to put honey in a bottle. Ferment it, and put it in a bottle.’”

With that idea, the Dancing Bee Winery was born. The winery is located just next to the Walker Honey Farm retail location off U.S. 190 in the rural expanses of eastern Bell County.

“It’s the same wine process – you’re feeding the yeast the sugars and the grape and the by product is the alcohol,” he says. “What you feed the yeast affects the flavor profile. We’re just feeding the yeast honey. We can play with the different honey varietals to put flavors in the mead. From the craft standpoint, it’s winemaking.”

The source of nectar on which the Walker honey-bees feed is what affects the flavor of the honey, and in turn affects the mead.

Walker Honey Farms own thousands of hives spread across about five counties in Central Texas, on both sides of Interstate 35.

Moving the bees to different areas can affect the honey varietal, Walker says. Part of the science of beekeeping is knowing when each species of plant blooms, so hives can consume that specific nectar and the varietal can be isolated.

“We have this black land strip that runs from Dallas to Austin to San Antonio. That’s where the cotton, the corn, the winter wheat and things like that are grown. Just east of that is the Post Oak Savannah with lots of Post Oak and Black Jack Oak,” Walker says. “We have three landforms within a 70 mile swath of our headquarters. In the winter, we can move just 70 miles and we get them 70 miles closer to the water, but we cut the elevation in half, which means they [the hives] will have a lot warmer winter and do better.”

Many honey varietals available to taste at their retail location.
“Twenty years ago, nobody knew about honey varietals. That’s one thing that the beekeepers in this country have done a good job of doing in the last 20 or 30 years is educating the public,” Walker says.

Walker hopes that one day people will recognize different honey varietals as they would distinguish a gouda from a sharp cheddar.

While Walker agrees that he can’t compete in price with honey produced out of state or internationally, he prefers to compete on matter of quality.

“We’re like the grass-fed beef people. We know we can’t compete on price, but we’re going to compete on quality, and we think that some people, and thank-fully a lot of people in the [younger] generation, are thinking about the quality of their food,” he says.