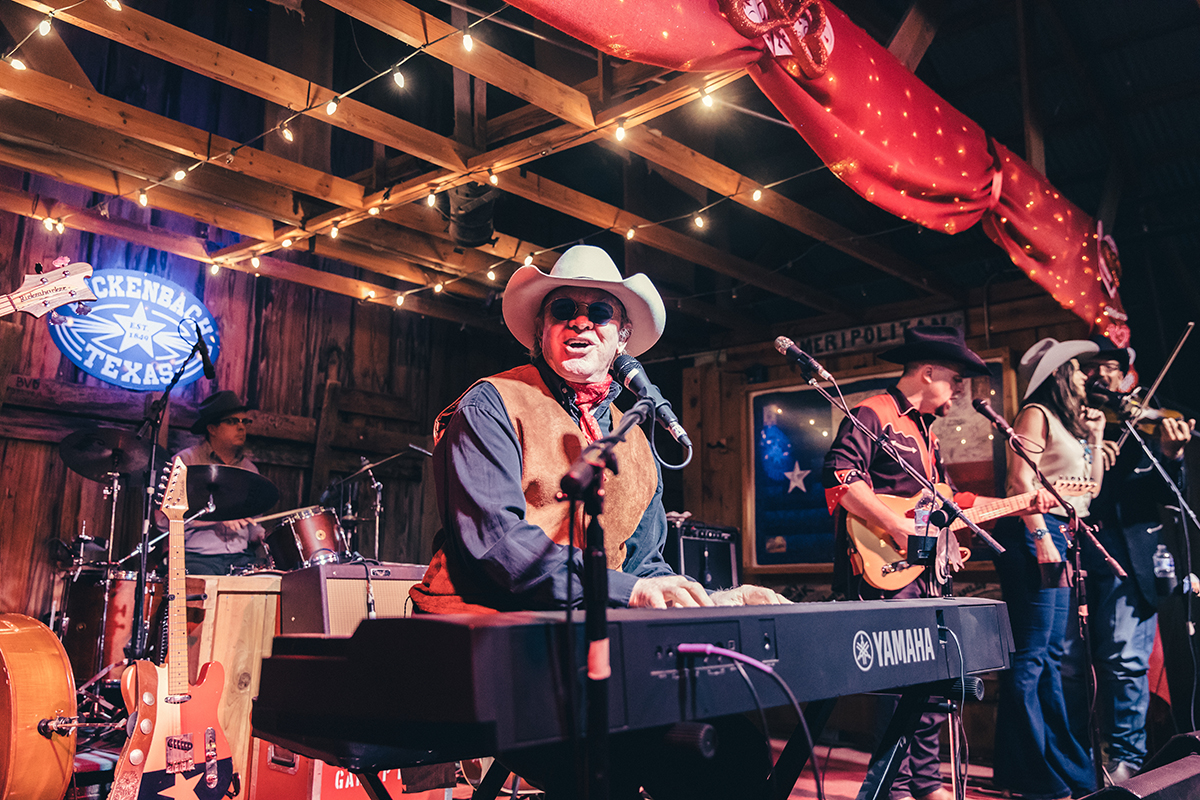 Live music suburb of the world

Nearby Austin calls itself “The Live Music Capital of the World.” But more and more, the claim to that title relies on the Texas Hill Country, where more opportunities are being created for soloists, duos and bands to perform at a growing number of attractive venues.

“It’s definitely picked up, especially in the last year or two,” he says, referring to his appearances at Hill Country venues that date back almost four decades. “I’m performing much more often in towns like Mason and Ingram and doing a lot of Hill Country dance halls.”

Ask Lanette Pennell, leader, guitarist and vocalist with the Almost Patsy Cline Band, a fixture at venues ranging from the world-famous Luckenbach Dance Hall to O’Brien’s Restaurant in Bergheim. In April 2018, for example, the band played 14 Hill Country dates, more than the usual eight or so.

“There’s so much music going on,” she says. “Like in Fredericksburg, it’s just incredible how many events they now have and wineries and restaurants with music. Or in Bandera, where we have four to five places now that have live music four to five days a week.”

“Austin is so expensive to live. Out here, you can pursue your art and keep a roof over your head,” she says. “It’s a real good time to be a musician in this area. Get yourself a place to live and you can find places to play.”

“Hill Country venues have a charm people love that you just can’t find in the city,” Geil says. “We get fans from France, Switzerland and other places who don’t want to go to San Antonio. They want to go out to honky tonks and dance halls.”

Ask Lonnie Lett, a Fredericks-burg musician who continues to find full-time work at local wineries, eateries and elsewhere after arriving a decade ago.

Austin is so expensive to live. Out here, you can pursue your art and keep a roof over your head. It’s a real good time to be a musician in this area. Get yourself a place to live and you can find places to play.
– Terri Hendrix

“Baby Boomers and Millennials are the two biggest parts of the U.S. population now,” she noted. “I encounter both groups more often in the Hill Country, but we especially have more retirees.

“Young people tend to stay in the cities, where ‘it’s happening.’ But as folks get older, they want to slow down a little bit, live it up or live it down, which-ever they choose. So they come to the Hill Country – to live or to visit – and they can do both at the same time,” she said.

A lot of them are women, Pennell says, “at least that’s what my Facebook page tells me.

“A lot of widows follow us because we play all kinds of music from their era,” she says. “It touches them, it’s engaging for them, they remember when they heard our songs with their husbands.”

Adds Geil, “They don’t want that hustle and bustle of city life. They want to go to a little tavern or bar or see the stars at night while listening to live music.”

Lett likes to see a crowd with listeners age 40 or more. He says, “They get into the music more, and they have more money. My tip jar gets plenty of attention.”

Adds Nunn, “I’m seeing more mature audiences, and they have more money to spend on my CDs and my book,” available for sale on a souvenir table.

Young fans
Lett’s audience also trends older, but he notices some of his biggest fans are younger.

“I’ve had people just old enough to drink and they’re out there in the audience singing Merle Haggard with me,” he says. “They know the melody, they know the words. They go, ‘My daddy used to play that all the time on the radio.’ ”

“There definitely are more retirees, but the crowd demographics are all over the map,” she says.

When the Almost Patsy Cline Band plays at Hondo’s on Main, a hot Fredericksburg nightspot, Pennell says, “I see a lot of young people there because of bridal parties and other groups out for the evening.”

She also sees more young teenagers and small children attending shows with adults who appear to be grandparents. She thinks many youngsters live in the Hill Country because Grandma and Grandpa are helping to raise them – so they become familiar with older songs.

“I’m fortunate. I have a lot of fans in their 20s, college-age kids,” Nunn says. “When I play at Luckenbach, it’s packed with people of all ages.”

Like Geil, Lett and Pennell, Nunn says his audiences at Hill Country venues generally are growing in size.

“They’ve just been consistently getting bigger the past couple of years,” he says. “They’ve picked up considerably.”

Adds Geil, “The more you go out and play and people hear you, they come back and bring a few friends.”

Venues
Like mushrooms, new signs pop up along and around High-way 290, alerting passersby to the latest wine tasting rooms that have opened. Meanwhile, restaurants and country stores from Fredericksburg to Bandera, Hunt to Marble Falls, Martindale to Kerrville – and beyond – offer music along with main courses and sides.

“I think I’ve played most of them,” Lett jokes. Currently, he has regular gigs at several venues and is booked months into the future. Unlike when he was younger, he no longer does one gig during the day and another elsewhere the same night.

“At 71 years old, I don’t want to do too much more,” he says. His two-a-day performance habit ended after being hospitalized right before his second show one evening.

“I was in distress and they had to take me to the hospital with dehydration to the point where my kidneys were shutting down,” Lett recalls.

Musicians are also finding a lot of opportunities to play at private functions, such as weddings, anniversary celebrations, family reunions, corporate functions and other gatherings at dance halls, in meeting facilities and outdoors.

The five-member group’s monthly shows at O’Brien’s tend to sell out two weeks before each performance. About a dozen tables are reserved for every performance a year in advance, she said.

“They leave our name up there (on the marquee outside the restaurant) and just change the date,” Pennell says. “We love that. It’s sort of like just going and playing in front of your friends.”

Lett’s name tends not to be in lights where he plays, but he’s been around enough to be easily recognized. For example, Friday nights regularly finds him at Backwoods BBQ in Fredericksburg, where diners wave to him as soon as they walk in the door.

“When I see them, I usually know what songs they want to hear because they’re there every Friday night,” he says.

For other venues that don’t serve food, like many wineries, Lett can offer BBQ. He has a partner with a food truck who can join Lett and serve up local delicacies such as brisket nachos – which, like live music, can help attract customers and encourage them to stick around.

“I offer full-band sound at a one-man price,” he says. “And if my friend shows up with a BBQ truck …”
Nunn, Pennell and Lett believe a lot more musicians are performing these days in the Hill Country. Lett sees many driving in from elsewhere, making long trips because they have fans moving into the Hill Country.

“You can see the influx of musicians coming in from places like Austin, but the cost of living here is pretty expensive, so they can’t move here,” Lett says.