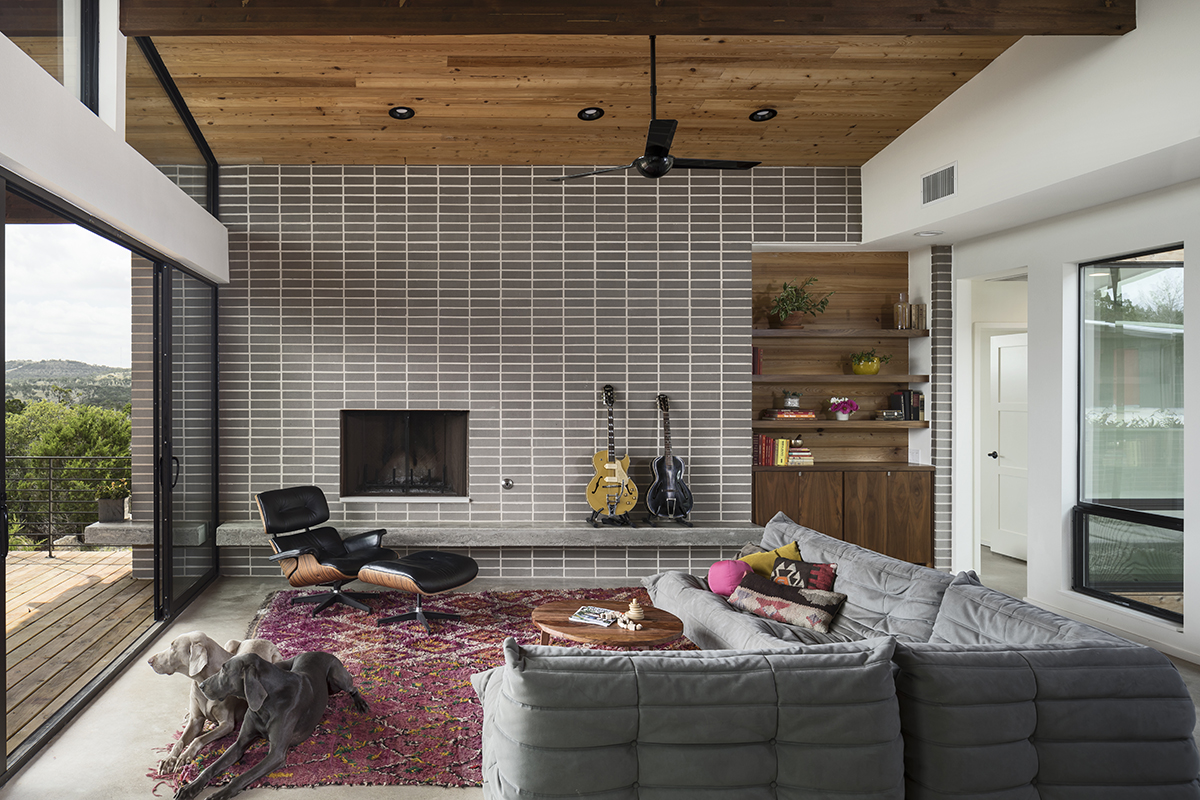 A mid-century indoor/outdoor home in the Hill Country

On a ten-acre ledge along Hamilton Pool Road that has sweeping views of the Austin skyline, sits a mid- century inspired recording studio/home that inspires musicians and homemakers.

The 16-foot floor-to-ceiling glass wall allows a person to maintain a constant connection to the outdoors.

“You can’t take your eyes off it,” says Nick Mehl, a principal in Austin firm Element 5 Architecture of the view.

The six-foot overhangs block any direct light and operable windows on both sides of the living space create passive cooling via cross ventilation.
Randi and Taylor Tatsch moved from Colleyville to be closer to the Austin music scene, had they both had a clear vision for the place they would call home.

Randi is an avid baker and cook and Taylor is musician and recording engineer. They both wanted a place that was calming, beautiful and functional with the simplicity and clean lines that are the hallmark of the mid-century aesthetic.

They knew that the house needed to accommodate their two children and two dogs.

Working closely with architect Mehl, Randi, in particular, threw herself into the project and was the driving force for how the house would look and feel. She managed the budget by care-fully sourcing fixtures and materials.

“I spent a lot of time thinking about function,” Randi says. “It was important to us to be together as a family.”

Mehl focused on using simple materials in open spaces to create flexibility and durability that didn’t relegate the kids’ activities into some separate space.

“It’s refreshing to have a client like Randi,” says Mehl. “She was ready to move forward when she found something she likes.”

Economic, off-the-shelf materials, applied by Randi, establish a design vocabulary that is both beautiful and livable. Most visible is the fireplace’s masonry wall, defined by gray stack-bond Acme Brick with white grout that creates an elegant visual focal point for the room. Concrete is used on the floor and on the hearth, which extends though the plane of glass that connects the living areas to the deck.

The public spaces – an open plan kitchen and living room – are flanked on one side by smaller bedrooms and the other by the master and guest suites. A long deck and the courtyard expand the home beyond its small footprint.

“We wanted to expose how the house is built as much as possible,” says Taylor.

The emphasis on functionality and beauty is prevalent throughout the house, where Randi and Taylor opted for built-ins to replace furniture wherever possible – desks in kids room, a dresser and shelves in the master, bookcase in the living room.

The house’s plan is under a low-pitched gable square roof with a courtyard cut out of the middle that also marks the main entry connection from the driveway.

“We wanted usable space both inside and outside because we wanted to keep the square footage of the house small to keep the costs down,” says Taylor Tatsch.

Outside, board and batten siding – another mid-century modern favorite – was used all the way around the exterior except in the more shielded courtyard, where natural wood is able to withstand the elements.

The courtyard provides the formal entry procession from the driveway and is surrounded by windows on three sides, making connections between inside and out seamless.

The shelter creates a micro-climate in the courtyard that is less breezy than the deck and more suitable for kids’ outdoor activities and crafts and a tree will provide additional shade once it’s matured.

Off the back of the studio a small covered patio off the re-cording studio that also looks out to the view, and the natural site affords a one-mile hiking trail around its perimeter, which Taylor and his dad cleared. The family and visiting musicians make good use of this easy, nurturing and head-clearing access to nature.

To allow Taylor to effectively work from home, a full recording studio was built adjacent to the house, keeping him within arm’s reach of family life while allowing him freedom to work the long hours a studio requires.

The space is used by bands that book the studio for two or three days at a time and includes a kitchen and sleeping loft that accommodates four. Sound control was an obvious concern, despite the nearest neighbor not being close by urban standards, Taylor was attuned to not being a nuisance in the neighborhood.

He worked with Mehl and contractor Zach Savage to design the recording studio and support spaces as boxes within a box, with double walls and window where needed.

“Both Nick and Zach allowed me to have a lot of input on the soundproofing techniques so the sound doesn’t escape and I don’t bother anyone,” Taylor says.

Sunrises are visible from the deck, and waking up to see the moon and constellations from the master bedroom window is a particular delight. They say the kids love watching the sun set and seeing rainbows in the sky after a storm has blown over.

Taylor and Randi say they are more in tune with movement of the sun in this house, which they never experienced before and is something that has maybe spoiled them for living in any other house.