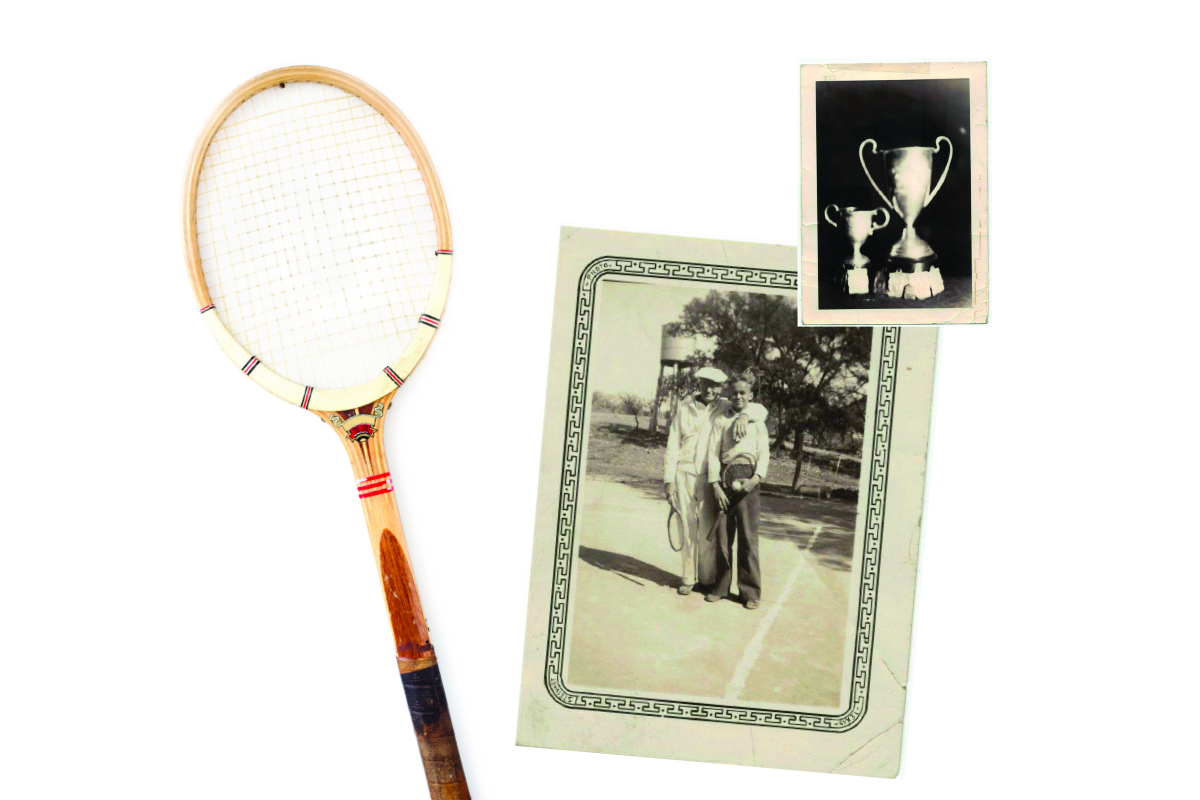 Mason, Texas, and Wimbledon, England, are as different as Beef Wellington and barbecue, but the two places share a love for tennis. Mason, best known for cowboy boots, deer rifles and pickup trucks, took a fancy to the game almost a century ago. Today this small Hill Country town has more tennis championships than anywhere else in Texas.

Tennis began as a sport of English royalty, but by the early 20th century, its appeal had spread to the rowdy masses. Its popularity grew even in rural America, where tennis stars May Sutton, Big Bill Tilden and Helen Wills became heroes in the unlikeliest of places.

One of those places was Mason County, where a county judge, two rural school teachers and a summer camp counselor infected a generation of young people with the tennis bug.

John Latham was the first tennis coach in Mason County, he was also the county judge. He built what may have been Mason’s first tennis court in 1922. Latham used a scraper pulled by a team of horses to level the ground. The playing surface was clay hauled in from a nearby clay bank.

Steve Latham went to state in 1933, advanced to the semi-finals in 1934, and won the state singles title in 1935 – the first of a truckload of state tennis championships for Mason High School. Steve paid his own expenses. He hitchhiked to tournaments from Abilene to Austin carrying a few clothes and a tennis racket. The return trip was a lot harder. He had to carry all those trophies.

The Latham boys were just starting to put Mason on the map when Effie Cleveland introduced her students to the game on a primitive dirt court near the Art school house. At about the same time, Walter Adkins, a member of a tennis-playing family from Brady, took the job as principal at Peter’s Prairie, 10 miles north of Mason.

“We had two clay courts at Peter’s Prairie,” 94-year-old Francis Bode says. “Our parents hauled in new clay every year from a hill on the Kasper Place. We had a homemade metal roller, and we rolled the clay out like pie dough.”

“Most clay courts are red, but ours were a pale pink. And they didn’t play like clay courts in France where players slide all over the place. Our courts were hard and smooth, more like concrete.”

The number of courts in the county doubled in 1931 when Tom Holland, a Boy Scout leader and tennis coach, founded a boy’s camp on the Llano River ten miles southwest of Mason. Camp Holland had three clay courts and one cement court “better than any in Austin.”

While Mason County, with its macho cowboy culture, seemed the last place on earth where the sport of pretentious English royalty would catch on, tennis turned out to be a pretty good fit for tiny rural schools in the Texas Hill Country.

“Peter’s Prairie didn’t always have enough people for team sports,” Bode says. “Tennis was about right for us. We built our own courts. We didn’t need a lot of expensive equipment. A racket cost $1.25. And tennis was the only UIL sport for girls in the 1930s.”

Then just as tennis took hold in Mason County, a series of catastrophes almost killed the game. The Great Depression ruined the economy. Tom Holland’s camp washed away in the flood of 1935. A world war broke out in 1941. In the 1950s, a drought hit Mason County like a Bill Tilden forehand. Quite a few ranch families moved to the city to find work.

But when the rain returned in 1958, so did the youngsters, now grown to middle-aged, who learned to play tennis in rural Mason County. Roy Lehmberg, one of Miss Effie’s first-graders, taught the game to three generations of Mason tennis players.

Helen and Francis, with the help of the entire community, slowly built a tennis dynasty and a culture of winning at Mason High School. To date, the Mason Punchers have a combined 96 state championships in tennis. Dallas Highland Park is in second place, far behind with 55.

In 1967, Helen and Frances launched the Mason Open Tennis Tournament as a fundraiser to build more courts. No one got too excited about it in the beginning. The first tournament had a modest 146 entries. Players used the two courts at high school and two private courts out in the country.

But Helen and Frances spread the word, and by 1976 the number of entries had grown to over 1,100, which was no problem at all except there were only 67 motel rooms in the entire county. So the people of Mason opened their homes to participants and their families.

“Somehow, we housed, fed and watered everybody,” Frances Bode says with a laugh, “along a few strays. One year, courts were in such short supply we painted lines for courts on the south side of the square. My husband Billy built portable chicken wire backstops. Even then we had to play all night to get the matches in.”
After all these years, Mason is still crazy for tennis. Mason High School won four state tennis championships in 2018. Mason County may have more tennis courts per capita than any other county in Texas.

It’s hard to find a Masonite who doesn’t play tennis. The friendliest people in the world live in this small Hill Country town, but on the tennis court they’ll beat your socks off. In Mason, tennis isn’t just an athletic contest. It’s a social event. Many weekends the courts are full of players in their 60s, 70s and 80s, dressed in white, arguing line calls and talking trash.

Darned if it doesn’t sound a lot like Wimbledon.