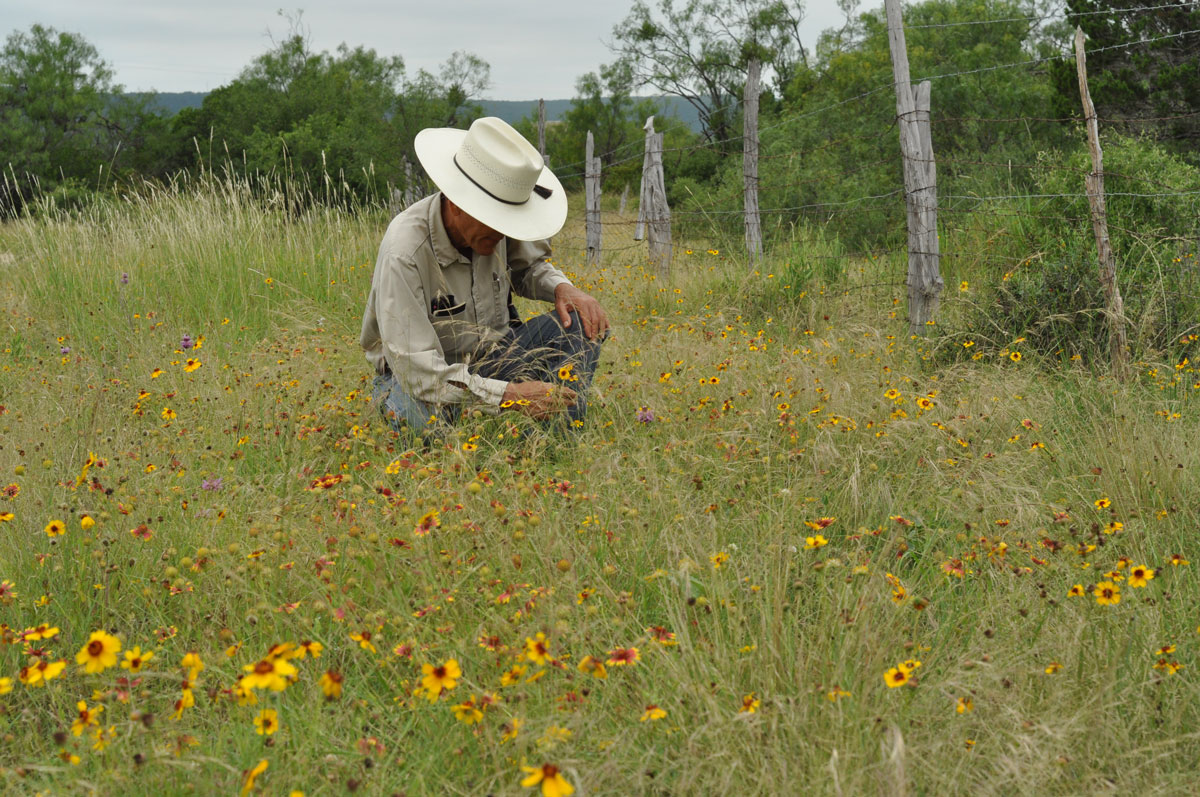 A Sculptor of Seeds and Soil

A sculptor molds, carves, shapes, and ultimately creates. They may work in different media and are adept with their tools. In addition to shapes, lines, and colors, some incorporate motion —an interrelationship of objects.

Bill Neiman is a sculptor. For more than four decades, his medium has been plants and Texas soil. In 1974, at age 19, he started his own landscaping company with a borrowed shovel, rake, and lawn mower.

Today, Neiman’s family and a dedicated team run Native American Seed, located along the Llano River near Junction. The family farm produces native wildflowers and grasses for land stewards across the state.

As with any artist, Neiman went through a few creative phases. “As a landscaper working outside the Dallas Metroplex in the 1970s, my job was to clean up behind the bulldozers and make things look nice.” He became good at designing and installing irrigation systems to support non-native, ornamental flowers, vines, and turfgrasses.

“Then in 1980, we had a hot summer—over 100 days that were over 100 degrees and no rain. These alien landscapes require more water than nature sometimes has to give. There wasn’t enough water pressure on the second floor of some houses and many of those ornamental landscapes north of Dallas started to fail.”

Driving home one day that summer, Neiman noticed verdant vegetation growing along a fence-line. He pulled over, got out of his truck, and took a closer look. “These were native plants,” he said. “They knew how to live right there without extra care—the solution was already here. That was the start of Native American Seed.”

Twice a year, Native American Seed distributes a catalog of native seeds. The Fall Issue, which prominently highlights wildflowers, is always entitled, Responsible Beauty. “These days, that’s almost a contradiction of words, where beauty has gotten so twisted up,” Neiman said. “‘Responsible Beauty’ brings it back to our responsibilities for the land.”

Neiman grew up spending considerable time on the land: hunting, fishing, taking care of horses, and camping. “We never stayed in a hotel and there was no tent involved. You slept on the ground—no zippity gadgets, just the land, water, nature.”

He credits a childhood spent on the land as well as ending his formal education halfway through high school as seminal experiences. “I only went to 11th grade. Often people who are overeducated see the world with lots of ridged edges and compartmentalized boxes.” For Neiman, the world is an open-ended, interconnected, and expansive place that starts with a seed.

While at times discouraged by the worldview that continues to support rapid development and fragmentation of the Hill Country, Neiman is also hopeful. He sees great power and faith in native seeds.

“These tiny, little seeds have a life of their own—wrapped up inside them. And they can start to help put the pieces back together.”

Take, for example, Texas Cupgrass. The seed head of this native, warm-season bunch grass looks like a loaf of braided challah bread. It provides nutritious seeds for Painted Buntings and a variety of other birds, along with nesting material and cover for small wildlife species. Those wildlife species, in turn, bring additional pieces back to your piece of the land.

The Texas Hill Country sits at the cross-roads of multiple ecological regions—including the Trans Pecos, South Texas Brush Country, Blackland Prairie, Cross Timbers, High Plains and Rolling Plains. Being at such a confluence, there exists a rich natural heritage: more than 50 species of fish, 140 species of shrubs and trees, 200 species of grasses, and 400 species of birds that are all native to this place.

“We get so focused on the demise of tropical rainforests, but we have our own treasure right here in the Hill Country—it too has lungs and provides us oxygen, along with our water. A man’s life is sometimes too short to see and understand all this.”

Conversations with Neiman always seem to weave together philosophy, ethics, and tactile dirt. He believes firmly that we have a responsibility to the land—and that this relationship warrants gaining a deeper knowledge, finding gratitude in a handful of pecans, and achieving a reciprocal giving and taking.
While he can talk about the relationship in terms of the ecology, often Neiman tends to gravitate towards speaking of land stewardship as an art form. “It’s easy to love the land when you stop putting things in boxes and start to see the soft, flowing lines that connect everything together.”

He expresses this art form whenever he uses a tractor or even the lawn mower in the backyard. Recently, he cleared a shaded place beneath a pecan tree to accommodate three picnic tables for a family gathering. Before running the blades, he studied his medium, accounting for such factors as what was still blooming and what had already gone to seed.

Then he considered how mowing might physically blend into the shape and flow of the landscape and how the plant community would, in turn, respond. “In order to be any good at sculpting, you have to be able to read the material that you’re sculpting to create something beautiful. You need the right tool, the right head, and the right heart.” Indeed, this is sculptural mowing.

For several decades, the Neiman family has provided thousands of land stewards in Central Texas the native seeds and philosophical infusion to cultivate that Responsible Beauty. “There’s more to it than just bluebonnets,” Neiman said. “I’m hopeful seeing so many stewards starting to put the pieces back together, shifting to native plant communities and achieving a balance.”

This is what keeps Neiman going. “How can we encourage more landowners to become curious about native plants, to bring native plants and seeds back home?”

His hope is that ever more landowners continue to be inspired by and curious about their land. “Can we make that connection? That’s what brings us into balance with our place on the land. When you make that connection, it’s unmistakable—you’ll know.”

Disclosure: Neiman is on the board of directors for the Hill Country Alliance, a conservation and stewardship group. Writer Daniel Oppenheimer also works with HCA.