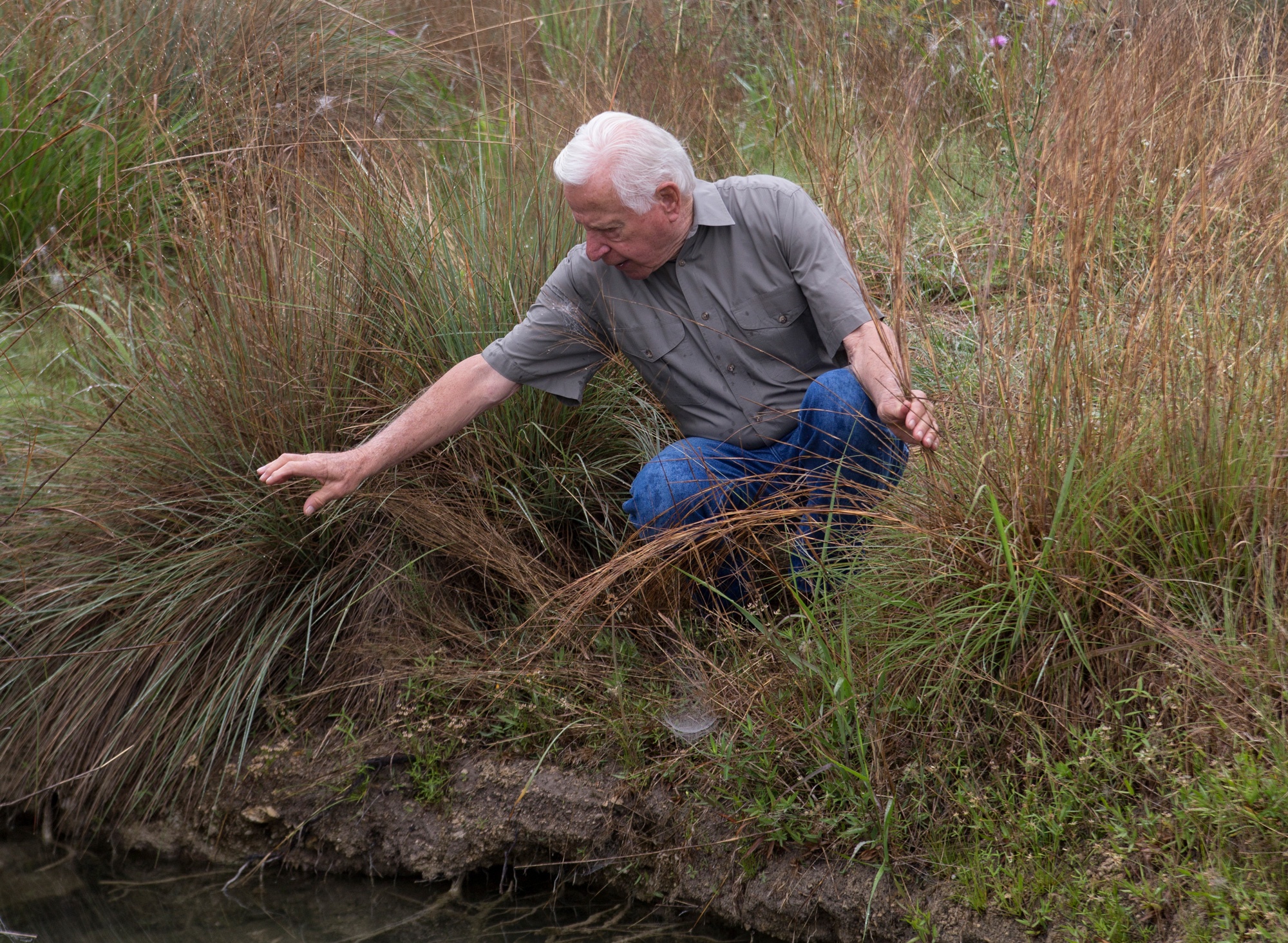 As a child, J. David Bamberger grew up in an Ohio family without electricity or running water. Each day his mother sent him to the neighbor’s farm with a bucket to pump water from their well. “When you’re that age, walking a quarter-mile back home with a bucket full of water, you end up sloshing half of it on your feet,” Bamberger recalls, smiling. “You could say I learned the value of water conservation at an early age.”

Bamberger worked with his mother on the land. “She taught me the benefits of Mother Nature, to respect and work with her.” He learned to collect, peel, scrub, dry and then sell bundles of sassafras roots in town. This early experience in sales seeded a prolific career that led Bamberger to become chairman and chief executive of Church’s Fried Chicken.

Today, there no better salesman for stewarding Mother Nature in Texas than J. David Bamberger. With piercing blue eyes and infectious energy, he has captivated audiences for decades at Selah, Bamberger Ranch Preserve near Johnson City.

Selah, Bamberger Ranch Preserve is a remarkable place. Once an overgrazed ranch dominated by Ashe juniper (Cedar) and bare ground, the 5,500-acre nonprofit preserve has been restored over 50 years with native grasses and other vegetation that slows and sinks precious rain into the soil and subsurface aquifer.

The word, Selah, is Hebrew from Psalms meaning “to pause and reflect.” Every year, the preserve welcomes thousands of visitors, where J. David hopes each person will pause to appreciate and consider their natural surroundings. “You have to get out here and look around. Flowers aren’t arranged in raised beds, but they’re out here, hundreds of species.”

Selah is a story of transformation. Working with a dedicated staff, advisors, and hundreds of volunteers, Bamberger has completed five decades of land stewardship and education. A new book, “Seasons at Selah: The Legacy of Bamberger Ranch Preserve,” documents this singular undertaking. Author Andy Sansom, notes, “The real meaning of Bamberger Ranch Preserve is to show us that there are two kinds of landowners: those that take from the land and those that give to the land.”

Through a combination of thoughtful grazing and brush management, seeding of native grasses, and creation of rock berms along the hillsides, Bamberger and his team have given much to the land, which now exhibits minimal bare ground. With hillsides now covered with a dense diversity of native plants, the land now acts like a sponge.

It’s a cold, damp February morning at the preserve. J. David has already tinkered with a bigtooth maple project, fed the birds, and held the daily caucus by the fireplace with his partner, Joanna, to discuss the weather, politics, and ranch happenings.

Feeling deeply that the ranch is his legacy, the 91-year old land steward stays busy. “You won’t reach me until after dark, because I’m out there doing something.” That something can range from corresponding with donors — sustaining land stewardship and education for a 5,500-acre non-profit Preserve in perpetuity is not inexpensive — to casting native grass seed in a pasture, to speaking with a group of Girl Scouts or a gathering of renowned conservation peers.

His lessons are varied but are all tethered to a modest principle: work with, not against, Mother Nature. “Our classroom is the outdoors and it’s a place where one can experience nature as she is, pure and simple.”

What many may not know about this outdoor classroom is that the preserve proactively maintains about 600 acres of Ashe juniper woodlands. More commonly referred to as cedar, Ashe juniper is a hardy evergreen tree native to Texas. While the hardy tree has garnered a bad reputation for its ability to spread, it provides cover, nesting material, and winter-time berries for many birds and mammals.

“In the ’80s, environmentalists told me to leave all the cedar for the Golden-cheeked warblers while long-time ranchers encouraged me to clear more of it,” Bamberger recalls. “Ultimately, we decided to take a balanced approach. We never tell people to take out all their cedar; it’s a native tree.”

In areas that were cleared of Ashe juniper and then seeded, deep-rooted native grasses such as Switchgrass, Yellow Indiangrass, Big Bluestem, and Little Bluestem have become some of the all-star attractions.

“Our most prolific grass here at Selah is Little Bluestem,” said J. David. During the growing season, this base of this native bunchgrass’s stems is blue. In the fall and winter, however, the perennial grass turns to a rich, red-mahogany. In the fall, visitors may find J. David stripping seeds and casting them into new pastures.

His love for native-grasses and land stewardship runs so deeply that he has been known painstakingly to excavate entire stands of Lindheimer muhly with a shovel to demonstrate for visitors the bunchgrass’s deep roots that anchor the soil and funnel rain into the subsurface aquifer.

Once, in fact, Bamberger removed a stand of Lindheimer muhly, rinsed its roots, carefully placed it in a trash bag, and drove it to a public hearing at the Texas State Capitol. “During my testimony to that Senate committee, the Chairman told me I had three minutes, but I took seven. And when I pulled the grass out of the bag, it tossed dirt all over the place; most of the visitors laughed, but the Senate committee chair was not amused. You should have seen it,” he said grinning as he leaned back in his office chair.

When the rolling hills at the preserve absorb rainwater, this sparks a remarkable sequence — one that bridges the land surface and subsurface, as well as the rural-urban divide of Central Texas.

These well-vegetated hills teeming with rainwater slowly feed an underground aquifer. That rainwater then re-merges to the surface through springs that feed Miller Creek, a tributary to the larger Pedernales River.

In 2011, Bamberger started to reach out to some of his neighbors in the Pedernales River Basin to discuss their shared interests in conserving the river. “At our first meeting, we had maybe 18 people, and since then we’ve had gatherings of over 80 landowners.”

This Pedernales Landowners Potluck continues to be a successful bi-annual phenomenon, in part, because of a guiding mantra that J. David recites readily: “We are not an organization — it’s more like a family reunion. There are no memberships, no newsletters, no dues, no file cabinets, no office, no minutes, no executive director, just interested landowners getting together to learn and to share information that may affect the Pedernales River and our quality of life.” This landowner-centric approach for bringing together neighbors over a meal has provided a model for stewards in other watersheds.

While his impact transcends river basins, J. David is quick to point out that one need not have a large ranch to make a difference. “Small acreage owners can create a place for birds, flowers, and beautiful native grasses. We can all talk with our kids about nature during breakfast and be a beacon for our neighbors.”

While the physical space and biological richness of Selah, Bamberger Ranch Preserve will no doubt be his lasting legacy, J. David Bamberger has also had an impact on tens of thousands of stewards old and young that have visited the Preserve throughout each calendar year.

Whether you have visited the Preserve or not, his advice is simple and ageless, across generations and seasons. “You may prefer one season over another, but there’s beauty in each one. You have to go out and look for it. Just look closer.”