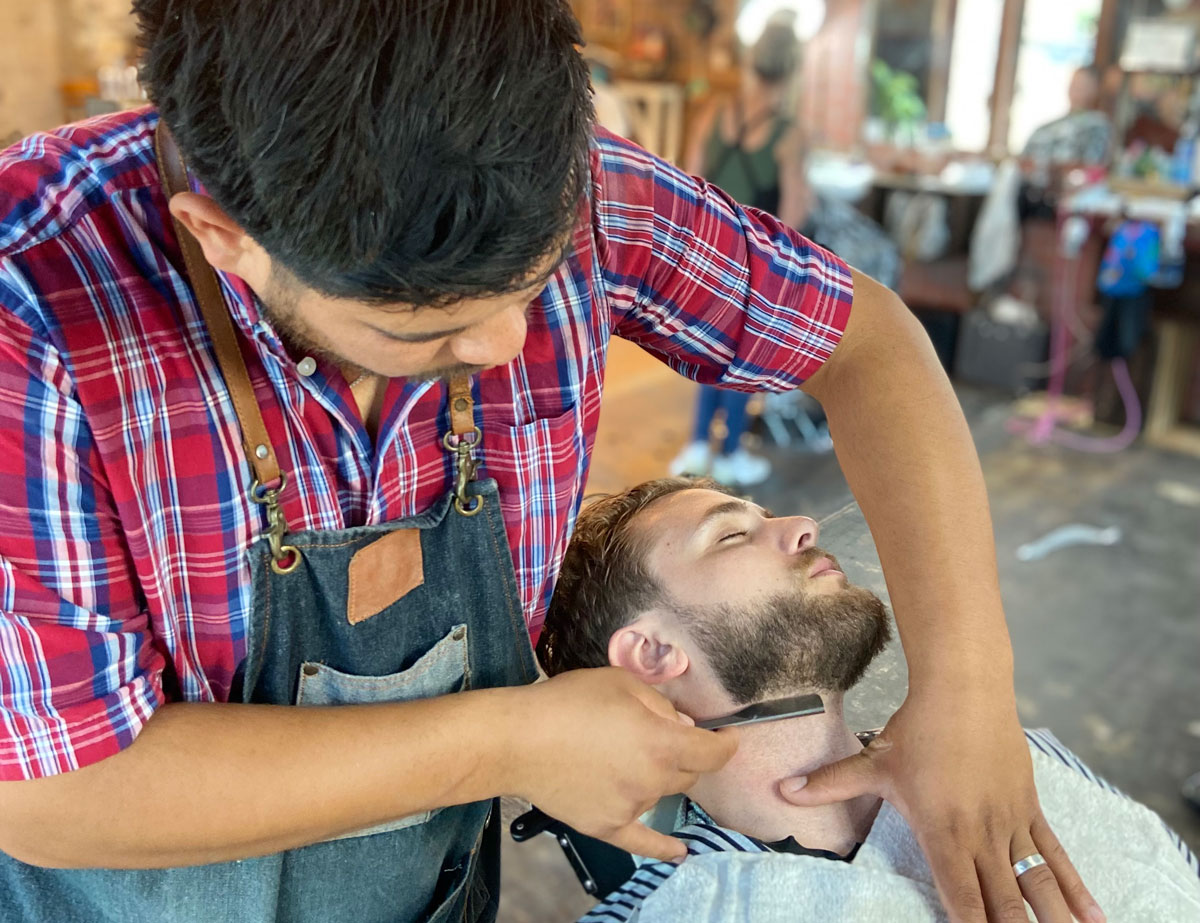 Barbers, bar owners look to their past and create a casual place to hang

Part Tex. Part Mex. Part hangout and all Hill Country, but with no pretensions whatsoever.

That describes 1962 Barber Company and La Escondida 1962 bar, an evolving community gathering place in Kerrville. Parked between a NobiliTea and across from the cool Pint & Plow brewery and restaurant, this business run by two thirty-somethings has gained a following for being old-school cool and a relaxing hangout.

Growing a business and expanding, during the coronavirus era and some personal challenges, may not be in everyone’s business plan, but Daniel and Anabel Medrano have rolled with life’s punches and taken their chances.

“Whenever we moved into this building, we didn’t have any idea that Kerrville would move in this direction, so it’s been a pleasant surprise,” Anabel Medrano said. “I think [we’re growing] because thanks to Pint & Plow and NobiliTea, this is just a more happening street now. It’s getting more attention. A lot of people say it has good vibes.”

1962 Barber Company opened almost five years ago in a 1931-era brick and tin building. Growing up in nearby small towns, the Medranos wanted to create a space that was unlike any other in town and was one of a kind. They target men’s grooming customers, using traditional, straight-razor and scissor cuts, grooming tonics and pomade. It’s old school right down to the barber chairs.

“I think we’re old souls,” she said, saying both may have been born into the wrong era. “But we had to grow up fast because we were young parents. We get along better with older people, so that’s who we wanted for our clientele.”

Daniel is a Hill Country native of Ingram and Anabel’s family moved from San Jose, California to a ranch near Center Point and the two met when they were in their early teens.

The Medranos took a detour to Austin for eight years when they were in their early twenties. In Austin, they worked in barber shops and Daniel also did landscaping work. He had been cutting men’s hair since he was 16, and and got licensed before opening the shop. Anabel was trained in cosmetology, but went to barber school to focus strictly on men’s grooming.

“We were getting the barbershop ready before we even unpacked our belongings at our house,” she said when they decided to return to Kerrville and take the plunge.

“We had a smaller shop and were paying rent, and we didn’t want to have a landlord anymore,” Daniel said. “When we came to tour this building, I saw the openness of it. We saw the large open area in the back and thought, ‘This is perfect for a bar.’”

Enter ‘La Escondida 1962,” or the Hidden One. This back-of-shop bar also wants to create a customer base that is loyal and comfortable. The casual setting has a large, sliding door that opens onto an outside area covered with large live oaks. They added a stage for live music and a food truck.

“We’re fixing it up slowly and the past year, we finally put in the bar,” she said. They did so with an eye and ear toward their pasts. Both their fathers had performed as Norteno musicians around the Hill Country and in Kerrville’s Lopez Club, which no longer exists. “We met dancing, and wanted to incorporate that into what we have here.”

But it wasn’t a linear path to popularity. “Life hit hard when we moved from Austin,” Anabel said. “Two weeks after we moved here, my dad had three strokes and I was in a fire accident myself.” Medrano was helping burn a pile of wood and gasoline fumes spread to her clothes and caught fire. She spent time in San Antonio’s BAMC burn unit “wrapped up like a mummy.” But she recovered and resumed work toward getting her bar licenses.

The Medranos have purchased the building next door and will move the barber shop into the smaller space and expand the bar and community space. Deer mounts, a cow skull, and papel picado add a flavor and color that is a 100 percent mix of all things Texan.

“We’re now being called ‘the melting pot’ because of the diversity of people we get. We’ve been super blessed because our culture has really been supportive and anyone and everyone feels right at home. We have Spanish bands and English bands, so it’s for everyone,” Anabel said.