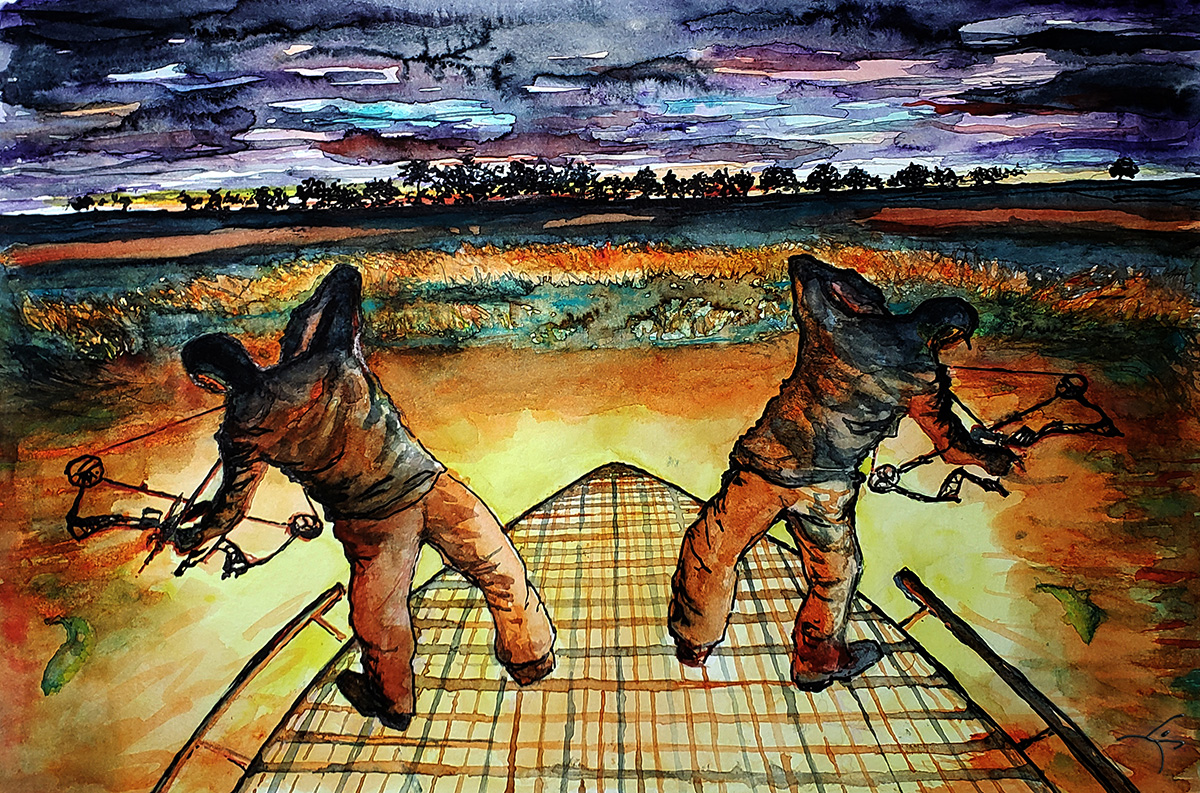 Archery and Angling ‘til Midnight

The Unusual Art of Bowfishing

Like to bowhunt? Like to fish? Never done either – but intrigued about the idea of trying both at the same time?

Then Marty McIntyre may be your man.

On Belton Lake, between Killeen and Temple, McIntyre operates Garquest Bowfishing Adventures. He offers 35 years’ experience guiding new enthusiasts from around the U.S. who combine archery and angling while slowly traversing shallow waters that stay warmer and attract fish.

About 90 percent of the time, his bowfishing trips are scheduled after dark: 8 p.m.-midnight or, if children are participating, 7-11 p.m., McIntyre said.

“That’s usually when the fish are feeding,” he said. Also, it’s harder to see fish during daytime due to the sun and sky reflecting off the water.

McIntyre leads bowfishing trips on lakes throughout the Hill Country and elsewhere in Texas. He will trailer his custom-made, 22-foot boat to most any lake a bowfishing customer wants.

Bowfishing gear is provided. All each customer needs to bring is appropriate clothing, snacks and drinks – and a current fishing license.

Like a Creepy ‘It’s a Small World’
His boat is equipped with a row of 150-watt lights built into the outside hull, which allows bowfishers to peer into the water about 25 yards out.

They and McIntryre, who steers the slow-moving vessel around submerged trees and rocks, carefully and constantly scan the shoreline. They look for reflections, shadows and other signs of movement by large, passing fish such as gar, buffalo, tilapia and carp that can weigh more than 20 pounds.

Bowfishers must react quickly. Fish can show themselves, then vanish in the blink of an eye. And since fish often swim together, other targets also swim quickly away and are hard to find again if they reach the dark water.

The boat lights also illuminate branches, rocks and shoreline protruding above the water line. The effect can be haunting, kind of like a creepy version of the Disneyland “It’s a Small World After All” ride. It’s also can be a thing of beauty, in a stark, nearly black-and-white manner.

Doing Lakes a Favor
A favorite McIntyre saying is, “Saving Game Fish, One Trash Fish at a Time.” Bowfishers on his boat target species that have no natural predators in various Texas lakes where he leads excursions.

Alligator gar is a good example. Decades ago, it is believed they migrated up rivers feeding into the Gulf of Mexico to spawn. As rivers were dammed to create Texas water supplies and cool power plant, the gar adapted and began wiping out other fish species by feeding on their eggs.

Same with carp and buffalo, which have been called “feral hogs of fresh water.”

“If a lake gets full of them, they will clean it out,” he said. “We’re doing the lakes a favor.”

Just a Single Arrow Needed
Bowfishing dates back thousands of years, to the Aztecs, Inuits and Aborigines. Over time, they learned to tether an arrow to the bow, so it could be retrieved and reused throughout a bowfishing excursion. Today, the line tied to the arrow also is tied to a fishing reel, so the arrow can be quickly dragged back onto the boat.

When a bowfisher shoots at a fish, he or she can quickly reel in the catch … or the arrow when it misses.
“Unlike hunting, where you need to walk some distance sometimes to retrieve them,” McIntyre said.

The arrow’s tip is accented by two barbs pointing in the opposite direction, to secure the fish once it’s speared.

Once a fish is boarded, McIntyre takes over: he unscrews the arrow tip that’s passed through the fish and deposits the catch into a holding tank below the deck’s floor.

Water slows a shot arrow faster than air. McIntyre likes to host parents with their children on bowfishing trips, but he notes kids usually need to be eight to 10 years old to be strong enough to pull the bowstring back far enough for the arrow to penetrate a fish.

Leads Kids to Try Archery
First-timers are welcome and frequent. McIntyre thinks parents whose children may be interested in archery should consider starting with bowfishing.

Older participants often have a history of enjoying fishing, hunting or both, McIntyre said. Others are just “outdoorsy types who like constantly moving (around the boat), constantly watching for fish.”

People from across the U.S. have bowfished on his boat, McIntyre said. Many come from the Midwest, where bowfishing is more popular than along the coasts. A good number also are soldiers and others who work at Fort Hood, which borders much of Lake Belton.

“I see a lot of people who just want to try something different,” he said.

Bowhunting sometimes requires the hunter to “aim high” to account for gravity as the arrow streaks toward it target. When bowfishing, the opposite is true: one must “aim low” due to refraction. Light rays bend as they enter water, making the fish seem closer to the water’s surface.

Another factor, McIntyre said, is bowfishers’ tendency to inadvertently pull the bow up while shooting the arrow.

A popular tool for helping in this regard: a laser sight to help guide shots lower than where a fish appears.

‘I’ll be Coming Back’
Michael, a large, friendly man clad in a U.S. Army cap and bright sweatshirt, returned one recent night to try his luck again on McIntyre’s boat – and he knows all about shooting too high.

He came up emptyhanded in 2018 after his wife gave him a Garquest trip for Father’s Day. This year’s trip was for Valentine’s Day, he said.

Like most of McIntyre’s bowfishers, Michael had no previous experience with a bow and arrow before trying bowfishing. Over four hours on his second trip, using a bow adorned with American flag images, Michael unleashed about 100 shots at fish (and one log). Despite McIntyre’s repeated admonishments to aim lower, Michael still got no closer than nicking one fish’s dorsal fin.

Meanwhile, McIntyre’s granddaughter and unofficial first mate, Riley Fornica, 13, decked a couple buffalo that ranged from five to eight pounds. But unlike Michael, she’s been regularly bowfishing with her grandfather for almost half her life.

Still, Michael enjoyed the experience. A fisherman for many years, he understands the lure of the sport isn’t dependent on how many fish are caught.

“I had a great time,” he said afterward on the dock. “I’ll be coming back.”

Information on Garquest Bowfishing Adventures is available online at www.garquest.com, via email at garquest@aol.com or by phoning (254) 931-3474.