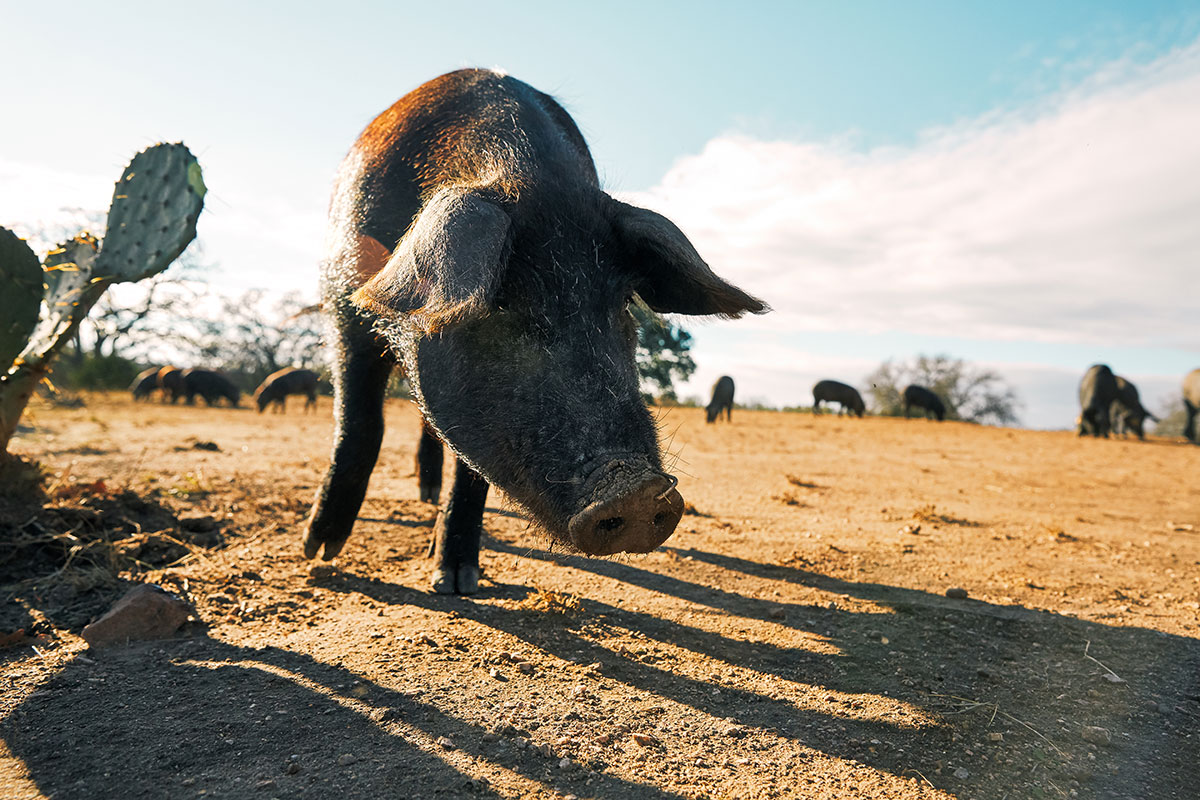 Swine as priceless as truffles

Black-footed Iberian pigs have been raised for centuries in southern and central Spain on oak tree-laden pastures known as dehesas, where the stout, sturdy pigs range freely to feed on acorns during the montanera, the season just before slaughter.

The demand for the Spanish delicacy, inconsistent acorn yields, recent droughts, and high real-estate costs has caused a surge in jamón ibérico prices that some are calling a bubble – a full jamón can cost upwards of $1,000.

Out of this uncertainty, two Spanish entrepreneurs, Manuel Murga and Sergio Marsal have taken the bold step of moving production out of Spain to a new home that promises a more certain and sustainable future.

The new home is a 300-acre farm in Flatonia, Texas, under a new venture, Acornseekers.

“The climate and terrain is quite similar, but more humid and rainy which is really good for the pastures and for the pigs, because they have access to herbs all year long,” Marsal says. “The pigs have adapted very well since day one (four years ago). These amazing animals are very rustic and smart with a high adaptability capacity. They have a natural instinct to do so.”

The melt in the mouth, sweet, sumptuous nutty umami flavored pork is a luxury good on par with truffles and caviar. It’s been available in the United States since 2007 and ranges in price from hundreds to thousands of dollars.

Adding to the already-high demand in Europe and the United States, desire for this delicacy amongst China’s luxury class has spiked, raising prices (and demand) considerably in Spain and elsewhere, according to the South China Morning Post.

The chefs really love it. The first thing that they say when they try our meat is that it looks very beefy because the high content of tocopherol, alfa and gamma from the pastured grass add a beautiful and bright red color to it and plenty of flavor as well.
– Sergio Marsal

Breeding
In Spain, the black-footed Iberian pigs range freely on Holm Oak acorns native to southern and central Spain and double in weight during this period. The pigs acquire a rich oleic acid content from their steady acorn diet.

“The Live Oaks in Texas are mostly Quercus Virginiana and some Quercus Ilex, really pretty close to the ones in Spain,” Marsal says. “We have some documentation that shows that in Texas we have ten times more oaks than in Spain.”

This guarantees a lasting and abundant supply of acorns for the gastronomic delicacy.

Regulations
Jamón ibérico de bellota is the highest of the four grades of jamón ibérico, with the grades strictly regulated by the Spanish government.

The pork is cured for at least thirty-six months, this ham features a deep ruby-colored flesh and rich layers of creamy fat that glisten at room temperature.

Acornseekers will have its first Jamon Ibericus production in the fall of 2020.

“We are really very satisfied with the quality of our meat,” Marsal says. “The analytics says that the content of oleic acid is higher than the imported one. In terms of tasting, the grass that our animals pasture all year long helps a lot to make a very tasty meat, a very special one.”
Chefs in Texas already have their eyes on Marsal’s pork.

“The chefs really love it,” he says. “The first thing that they say when they try our meat is that it looks very beefy because the high content of tocopherol, alfa and gamma from the pastured grass add a beautiful ad bright red color to it and plenty of flavor as well.”

Education
People who are new to jamón ibérico might be unfamiliar with terms such as pluma, presa, lagarto, secreto, la montera and jamonero, for example and Marsal and Murga want to help Americans enjoy what their countrymen have delighted in for centuries.

“We want to educate the American consumer about the Ibericus products and culture,” Marsal says. “Keep in consideration that we have been working on that since the first day that our pigs touched American soil in JFK, August 2, 2014.”

“Our goal is the incorporate the Ibericus production to the American proud production like Angus one,” he says. “Our hope is to create a new category product in the American meat industry. For that reason we have to be very confident with the quality of our production, we have a lot of passion and patience.”