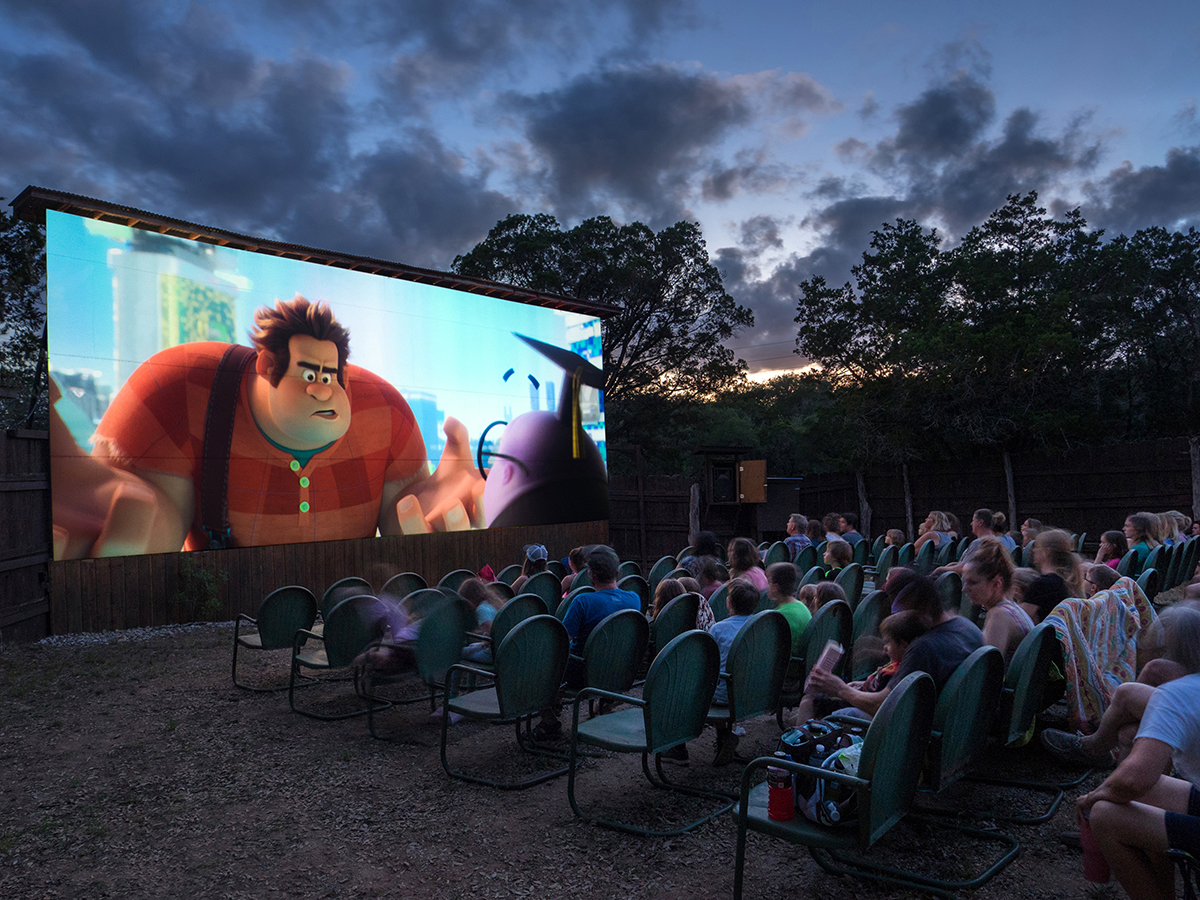 Located just east of Ranch to Market Road (RM) 12 in Wimberley, the Corral Theatre is like a drive-in movie with folding chairs instead of cars. It’s believed to be the only outdoor, walk-in theater in the nation to show first-run films, allowing viewers to experience Hollywood’s latest while enjoying gentle Blanco River breezes beneath the town’s starry sky.

This year marks the 70th summer since the original Corral was built by twin brothers Roy and Ray Avery. First located centrally in Wimberley, it was both a theater and community meeting place.

The brothers sold it to Carol “Mama” Knolk, operator of another Wimberley institution, the Rocky River Ranch girls summer camp. Knolk moved the Corral to its present location adjacent to Rocky River in 1966.

In 1971, Mary “Skeet” Anderson, a Girl Scout field director for 17 years, purchased Rocky River and the Corral, where campers see movies several nights each summer when the theater isn’t open to the public.

The Corral’s locale has contributed to some interesting experiences for movie watchers. Like when Western films feature horses loudly running and neighing, attracting some of Rocky River’s horses next door to poke their heads over the fence. (They also seem to like the smell of fresh popcorn.)

Or one night when it didn’t rain, some patrons still got soaked, thanks to some kids tossing water balloons over an-other fence.

Films are scheduled Friday, Saturday and Sunday nights from Memorial Day to Labor Day weekends. Gates open at dusk and the movie starts after dark.

For a listing of films scheduled for 2019, go to www.corraltheatre.com.

Get there early to claim the best available folding chairs or gym-style bleacher spots. You also can bring your own seats (but not extended lounge chairs; they take up too much space), as well as your own snacks and drinks. There’s room for about 200 people per screening.

Admission is $6 per person, cash or check only. Popcorn and candy bars are $1 each – again, no credit or debit cards.

The Corral has long been a popular teenage hangout – even when a movie isn’t being screened. Anderson likes to recall a time when a mother phoned.

“She said, ‘Did you have a movie last night at the Corral?’ I said, ‘No, ma’am, we haven’t started our season yet.’ She said, ‘Are you sure? My daughter told me she was at the movie theater last night.’”