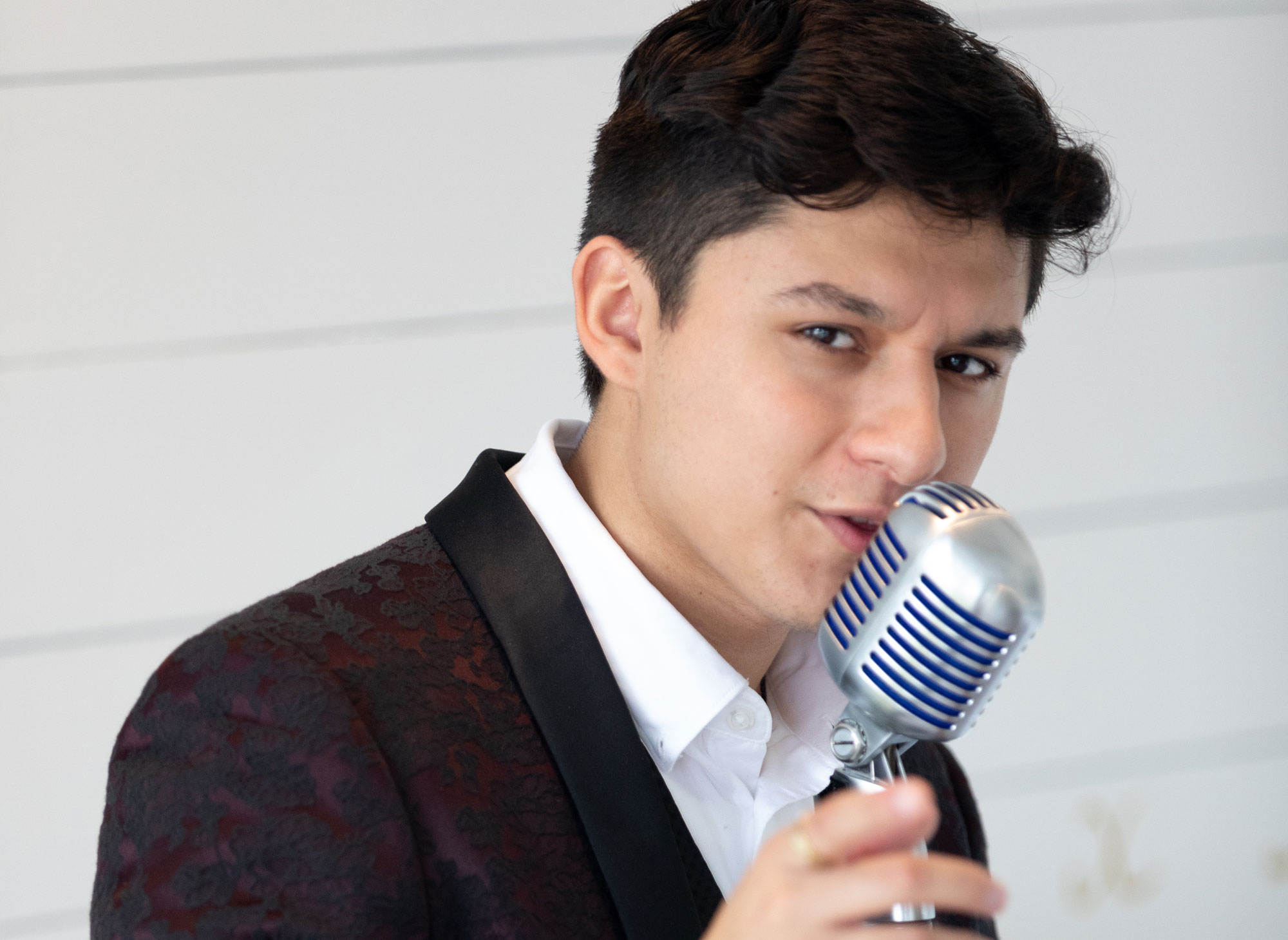 The Best is Yet to Come

Growing up in San Antonio, young vocalist Diego Martinez remembers being surrounded by music. While his father played in a band and his siblings had their own musical talents, jazz was a love entirely his own. At the early encouragement of his mother, he began performing with local groups before finding his love for big band during his middle-school years. In high school, he graduated from The International School of the Americas and accepted an invitation to attend the prestigious Berklee College of Music in Boston, where he’s a junior today.

Diego, dressed simply in a plaid-checkered shirt with khaki plants and worn brown boots, had an air of elegance, confidence and charisma that defied his young age.

Throughout the pandemic, Diego studied virtually from his home in San Antonio while pursuing his musical passions through gigs across Central Texas. Currently, he’s the lead male vocalist with the Beethoven Big Band, which performs every third Friday of the month from March to October at Beethoven Männerchor in San Antonio’s historic King William neighborhood.

“It was my dream to sing in front of a band, especially big band jazz music,” he said of his audition four years ago. Since then, he’s expanded his repertoire from ten to more than two-hundred songs. “I have definitely grown with them,” he said. “It is lots of fun.”

Unsurprisingly, Diego finds inspiration in iconic crooners from the past, like Bobby Darin, Frank Sinatra, and Michael Bublé. In 2019, he had the opportunity to sing with Bublé after being selected at his show in the AT&T Center in San Antonio. “I had seen him do that in his past concerts but I was struck,” he shared. “The first thing I noticed was every movement of mine was on a giant screen.” With microphone in hand, he sang one of his favorites, Ain’t That A Kick In The Head, and earned the high marks of Bublé himself, who called Diego “a new American idol.”

Most recently, the young artist has been wooing audiences in the Texas Hill Country. In late 2020, he received an email from the team at Martini’s Seafood House in Fredericksburg, inviting him to perform for two nights in December. “It was a pretty big hit,” he said of his trial run. “Most of the live music there is not jazz and so people were kind of confused but they liked it – and Martini’s liked it.”

As fate would have it, a gentleman at one of those shows was impressed with Diego’s talent, and introduced him to the owners at the Elk Store Winery & Distillery in town. Once again, the crowds swooned for his fresh, inventive spin on classic songs. “We absolutely fell in love with him,” said General Manager Daniela Morales. “It is just a great energy when he’s here.”

Even in his short career, Diego’s skills have noticeably evolved thanks to his palpable passion, his continued commitment, and his consistent lineup of ongoing performances. “I’ve gotten so much better at performing. My voice has improved, my stage presence…” he said. “Even in school we are taught different warm ups and how to take care of your voice but I am not as productive unless I’m performing.”

Historically, the young showman admits he’s been drawn to songs for their melody over their lyricism, though he says that is changing with time. “The more I listen to the lyrics I understand why they’ve lasted all these years,” he shared. “The storytelling is pretty phenomenal.”

Regardless of what song he’s performing, Diego always dresses to the occasion, donning a nice coat, elegant slacks, and shined shoes. “I’m still crafting my originality,” he said. “I’m trying to lean away from intimidation as much as possible but want to stay true to the art of the genre.” He’s also grateful to his family, which has supported him throughout the years. “My dad comes to every single gig,” he shared. “He’s very supportive. My mom, too. She holds the fort down.”

While Diego will return to college in the northeast this winter, he is also preparing an album in 2022 featuring covers of the Great American Songbook, plus a few original tracks. In five to ten years, he hopes to be traveling more, preferably with a big band, and making it into some of his dream gigs back home, like Jazz, TX, located in the basement of the Bottling Department at the Pearl Brewery.

For this twenty-year-old dreamer and doer, Sinatra had it right. The best really is yet to come.

Follow along on Instagram @diegosatx or book him
for your private event by sending him an email
at: diegojazzsa@gmail.com